Student who accused professor of antisemitism is back 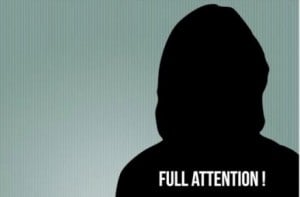 From The Truth Behind the Sarah Grunfeld story

Remember Sarah Grunfeld? She’s the York University student who stormed out of a lecture in September of last year because her professor said that “all Jews should be sterilized.”

It later emerged that Professor Cameron Johnston, who is Jewish, was using the statement as an example of an invalid and dangerous opinion that must be reasonably qualified.

It appears that Grunfeld left the 450-seat lecture before Cameron qualified the opinion. Grunfeld was widely rebuked, including by Maclean’s own 22-year-old Jewish columnist, Emma Teitel.

But she didn’t go away quietly. She’s now back in a YouTube video called The Truth Behind the Sarah Grunfeld story. At least, we assume it’s her; the face in the video appears in silhouette.

“I was ridiculed, I was demonized,” says the shadowy figure. “I was called an moron, a dimwit, an idiot…” The figure then explains that she was paying full attention (FULL ATTENTION!) and sitting in the front row of class. “I know exactly what I heard,” she says. The shadowy figure admits that the comment happened in the “first five minutes of [Cameron’s] talk about how opinions can be dangerous.” She says she waited for the professor to provide some kind of qualifier, but he did not.

This all comes before the shadowy figure accuses against the media, York University, Hillel of Greater Toronto and the Centre for Israel and Jewish Affairs of mistreating her. The voice concludes by asking: “what’s the future for Jewish students?”

A better question might be: “what’s the future of Sarah Grunfeld?”