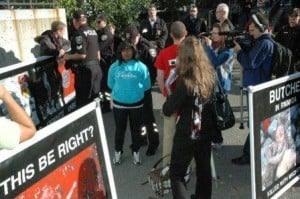 An anti-abortion protest at Carleton University

Cameron Côté, a graduate of the University of Victoria and former president of Youth Protecting Youth, a pro-life student club, has teamed up with the British Columbia Civil Liberties Association to sue the university, “seeking relief from the persistent, illegal censorship of the civil, peaceful expression of pro-life opinion on the campus.”

In 2011, the University of Victoria Students’ Society, which declared itself pro-choice, tried to revoke club status of YPY and, later that year when the club held a “choice chain” event showing provocative images of fetuses to passersby, found them guilty of “harassment” and temporarily took away access to student space.

In 2012, James Dunsdon, the university’s associate vice-president of student affairs, cited the SFSS decision when he told YPY to cancel another planned “choice chain.” After the protest went ahead, YPY members again lost booking privileges and were threatened by Dunsdon with sanctions.

One might be surprised to see the BCCLA, which proudly defends “women’s right to choose,” teaming up with a pro-life plaintiff. They offered this explanation. “All attempts to silence dissent through programs of systematic harassment as obnoxious to democracy. And when a public Canadian university, established, funded, and governed under the authority of a government statute—the University Act of British Columbia— forgets its commitment to academic freedom, forgets that its special freedom from “outside interference” was established to protect the special, unfettered, and uninhibited pursuit of truth within its space, it abandons any legitimate claim to independence.”

A recent report on freedom of speech at Canadian universities gave failing grades to 23 of 45. The most commonly cited limits were those placed on student anti-abortion groups. The report quoted the Trent Central Students Association’s explanation for rejecting a pro-life club: “Campaigning for pro life or pro choice [sic] is not allowed on campus… since there is [sic] so many opinions to this it can lead to a very exclusive group, while all groups at Trent must be inclusive.” It also quoted the Brandon University Students’ Union, which said it wouldn’t certify a pro-life group because, “[it] would be redundant since the Women’s Collective deals with all gender issues.” The report said student unions also hindered pro-life groups at York, Memorial, Calgary, Guelph and Lakehead.