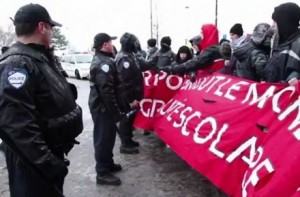 Montreal police have opened an internal investigation into the actions of police officers at an anti-tuition protest that occurred on Jan. 27 outside offices of Quebec’s education ministry.

It comes after a video was posted on YouTube and ciculated on Twitter that appears to show an officer suddenly attacking a small crowd.

It’s the latest evidence of tensions over tuition fees that will rise $325 over the next five years. Just last week, activists called for kidnappings, violence and sabotage to prevent the increases.

Police spokesman Ian Lafrenière told La Presse that every officer who was present will be interviewed as part of the investigation. He says the incident happened after a small group of protesters left the main demonstration of about 200 people and prevented police vehicles from leaving. Authorities first heard of the incident on Twitter.

Protest organizers have accused police of using excessive force. “As we can see in the video there was absolutely no provocation from the protesters. It was a totally impulsive gesture from the policeman,” Gabriel Nadeau-Dubois, a spokesperson for l’Association pour une solidarité syndicale étudiante (ASSE), one of Quebec’s largest student lobby groups, told CTV Montreal.