What students are talking about today (April 10th) 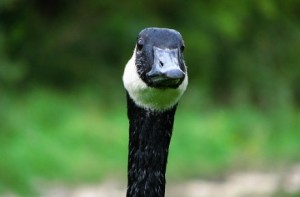 1. Alex Harris, a student at the University of Waterloo, and his dog Molson are calling themselves the “Geese Police.” The pair are patrolling the southern Ontario campus twice daily. Molson, a border collie-golden retriever cross, disperses the nuisance birds while Harris takes notes for his undergraduate thesis project. Canada Geese dominate the university’s campus, making a big a mess and scaring humans while trying to defend their territory. During mating season they get especially aggressive. It’s such a commonly discussed problem that the university’s bookstore now sell t-shirts that read, “I survived nesting season.” See CBC News for more.

2. Today is International Day of Pink, which means students everywhere are showing their opposition to bullying, homophobia and other discrimination by wearing, you guessed it, pink. It was started after high school students in Nova Scotia to support a pink-loving gay student who was bullied. It has high profile support from the likes of Rick Mercer and the Day of Pink Gala in Ottawa will be attended by former governor general Michaëlle Jean and radio host Jian Ghomeshi.

3. Fourteen people were stabbed at a branch of Lone Star College in Texas on Tuesday and 20-year-old Dylan Andrew Quick has been charged with three counts of aggravated assault. Police told the Houston Chronicle that the student used  a razor-type knife. Neighbours told the newspaper Quick was shy and had been born deaf, but that they saw little evidence of a troubled personality.

4. About 400 documents related to McGill University’s department of Development and Alumni Relations were stolen and sent to students through a student union listserv by a group calling itself McGillLeaks, reports The McGill Daily. The documents included profiles of donors and proposals for partnerships with corporations. “The leaks depict an administration that is eager to make inroads with new economic partners such as Canada’s growing oil and gas industry and willing to go to great lengths to foster its relationship with its donors,” reports The Daily. The documents were sent from a Students’ Society of McGill University email account, but the SSMU vice-president who controls the account sent an e-mail to the listserv shortly afterwards stating it was done without his knowledge. McGillLeaks wrote that their objectives include “supplying accurate information on the university’s relationship with the private sector.” McGill administrators say police are investigating.

5. Students in Newfoundland are happy that their tuition freeze remains in effect despite the fact that falling resource revenues forced cuts to the provincial budget. Progressive Conservative Minister of Advanced Education Joan Shea told The Muse student newspaper why post-secondary students weren’t asked to give more. “There’s tremendous opportunity for employment in Newfoundland and Labrador. We want to make sure that the people of this province are able to take advantage of the opportunities,” she said. “Being able to access post-secondary studies is extremely important because that’s the best way somebody will prepare for the labour market.” With tuition at just $2,550 per year, it’s no wonder students from other provinces are flocking to the rock.