What students are talking about today (December 13th edition)

Puppy parties, NHL lockout and the plot to kill Bieber 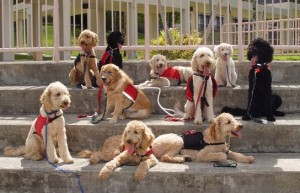 1. If you’ve fallen into an exam stress hole and your university doesn’t offer the burgeoning (and cute) service of dog therapy, watch this video – you can’t possibly be in a bad mood after watching a man high-five a Labradoodle. CBC Edmonton reports that the University of Alberta is the latest Canadian school jumping on the dog therapy wagon – and it’s wildly popular. Students lined up down the hallway for a chance to play with the pups, and a university official told CBC they hope to make the visits an ongoing program throughout the year.

2. In a bid to improve the college experience for LGBT students, the AP reports that the University of Iowa has become the first U.S. public university to pose options question about sexual orientation and gender on its application. The application asks students whether they “identify with the LGBTQ Community” among other optional questions, data the university hopes to use to gauge how well LGBT students feel supported. If a student answers yes to the question, Iowa’s admissions office will also e-mail them with information on housing options and campus resources.The AP reports that the  only other U.S. college to track LGBT students is Elmhurst College, a private liberal-arts school in suburban Chicago.

3. Disturbing details have emerged about a thwarted plot by three men to murder Canadian pop star Justin Bieber. The Toronto Star reports the graphic details of the bizarre plan to kill Bieber and two others, obtained from affidavit for arrest obtained by New Mexico State Police. The tale is equal parts strange and creepy: Dana Martin, one of the accused who is serving a life sentence for the rape and murder of a 14-year-old girl, has a tattoo of Bieber on his leg.

4.  Will work-to-rule action by public school teachers hamper high school students’ chances of getting into university? Extracurricular activities at elementary and high schools were axed as part of a union protest against Bill 115, but the CBC reports that the Ontario Public School Boards’ Association said this week  job action could last until Aug. 31, 2014. For graduating students looking to pepper their applications with references and activities, this could spell trouble.  Admission criteria varies by university (UBC requires a personal profile while the University of Windsor admits strictly based on grades), but students are nonetheless worried during an already anxious period.

5. Bad news, kids: It’s Day 89 of the NHL lockout and talks are still at an impasse. But things aren’t all bad for the University Alberta Golden Bears hockey team, the Canadian Press reports – they beat Canada’s junior men’s hockey team 4-1 in an exhibition game yesterday. NHL games are cancelled through Dec. 31, but those looking to get their hockey fix can find some reprise tonight: The final Team Canada roster announcement is expected after another exhibition game.