What students are talking about today (November 13th edition)

A physics video, a lawsuit over a B+ and an unfunny Joker 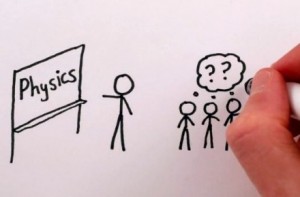 1. A new video funded partly by the Perimeter Institute for Theoretical Physics in Waterloo is calling on Barack Obama to improve physics education. The video is spreading surprisingly quickly, approaching 320,000 views already. “High school physics students across most of America aren’t required to learn any physics discovered since 1865,” says the narrator, who then lists off some of the discoveries since then, including photons, the existence of antimatter, MRIs, the big bang… you know, little things.

2. A 41-year-old student at Concordia University is doing what so many students feel powerless to do—challenging a grade he sees as unjust. William Groombridge is suing over a B-plus he got in his energy policy course that he says should have been an A-minus. He wants a refund of the course, alleging that the school school arbitrarily downgraded his final mark to meet an unofficial grade quota or bell curve. More in the Spectator.

3. Police in Boulder, Colo. arrested a 17-year-old who showed up at a cinema wearing a Batman Joker mask. He scared patrons who were reminded of James Holmes, the man who killed 12 people and injured 58 others at a Colorado premiere of The Dark Knight Rises. More in the Daily Camera.

4. Electrical engineers at Duke University in North Carolina have completed an “invisibility cloak” that allows light to pass around objects perfectly, rendering one’s hand invisible. It’s may be a while until we can sneak into class unnoticed, but it’s cool nonetheless. See the more at the BBC.

5. The number of students at the University of Ottawa who depend on the campus  food bank has increased tenfold in the past five years to roughly one in 10 students, the Student Federation of U. of  O. told CBC News. Student leaders, unsurprisingly, blame high tuition for the demand.

6. Students at the University of British Columbia are talking about bike theft. Tom Bancroft, a mechanic for the campus Bike Kitchen, told The Ubyssey that it happens daily. That lines up with the statistics: 83 bikes were reported stolen on campus in August and September, says the RCMP. Theft is a problem at many universities. Read more in the 2013 Maclean’s University Rankings.

7. Diwali, the Indian festival of lights, starts today. The holiday is celebrated by Hindus, Sikhs and Jains to honour the triumph of light over darkness and good over evil. It’s a time for visiting family, exchanging gifts and setting off fireworks. We could all use a little more light this time of year.

8. Christy Clark, British Columbia’s premier, is hosting an anti-bullying conference today in Vancouver. Join the discussion on Twitter with the hashtag #ERASEbullying.

9. GIF narrowly beat out YOLO in a tight race to become the Oxford American Dictionaries’ 2012 Word of the Year. Funny enough, GIF was coined way back in 1987. Read more on Macleans.ca.