What students are talking about today (November 19th edition) 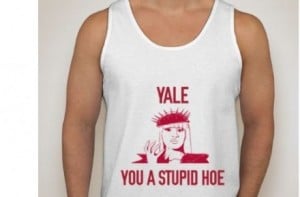 1. As the deadly Israel-Gaza conflict continues, CNN has footage of Anderson Cooper ducking from rocket strikes on repeat while Maclean’s Michael Petrou explains what to watch for next and Nick Taylor-Vaisey analyzes the headlines.

2. Proving that Harvard is still a refuge for the world’s foremost intellectuals, the student-run clothing store Harvard State is selling t-shirts with singer Nicki Minaj’s likeness and the words “Yale You a Stupid Ho.” The photos have offended some (at Yale I assume), but they need not worry. Unlike the shirts that proclaim “Veri Drunk Since 1636,” these ones aren’t yet sold out online.

3. McMaster University’s Marauders football team beat the Calgary Dinos on Saturday at the Mitchell Bowl held at Ron Joyce Stadium in Hamilton in front of nearly 6,000 fans. That means the 48th Vanier Cup on Nov. 23 in Toronto will be a rematch of the 2011 final when McMaster barely beat Laval’s Rouge et Or. Read more in The Silhouette.

4. Another large crowd formed at McMaster last week. It was for free tickets to the upcoming concert with Steve Aoki, Dragonette and Young Empires. Mac won the show in a TD Bank contest.

5. Folks at the University of Windsor in Ontario and at Dalhousie University in Halifax, N.S. are trying to get bike-sharing programs off the ground in their locales following the success of Bixi Bikes in Toronto, Ottawa, Montreal, Washington, D.C. and London, England.

6. Michael Applebaum, Montreal’s first Anglophone mayor in a century, was sworn in today.

7. AfterMath, the campus pub at the University of the Fraser Valley, is in deep financial trouble. Manager Brad Ross told The Cascade that it’s “an on-campus issue that students are finally getting passionate about.” More than 400 people have joined a “save AfterMath” Facebook group.

8. Student-run businesses at the University of British Columbia aren’t doing much better. Since May they have collectively lost $97,000. The shortfall may be related to construction, reports The Ubyssey. As a UBC alum, I sure hope they get this fixed; UBC is nothing without Pie R Squared.

9. Software creator John McAfee appears to have started a blog to defend himself against accusations while police in Belize continue to search for him in connection to the murder of his neighbour. The American computer security software expert was scrutinized by local police earlier this year when they raided his home and found guns, chemistry equipment and $20,000 cash.

10. The 100th Grey Cup football championship will happen on Sunday in Toronto when the Argonauts take on the Calgary Stampeders. The cities’ mayors are placing a friendly bet on the outcome. Calgary’s Naheed Nenshi has proposed that the losing burg’s leader donate his weight in food to the winning city’s food bank. Neither mayor is skinny, so that’s a generous proposal.