What students are talking about today (Sept. 10 edition) 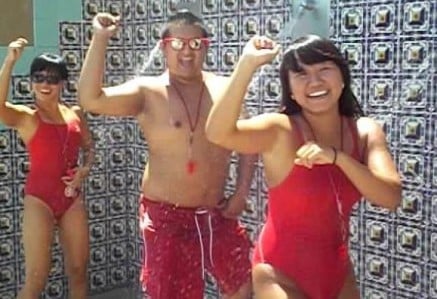 1. Fourteen lifeguards in El Monte, Calif. were fired for a spoof video featuring Korean pop singer PSY’s signature horse-riding dance moves. Their “Lifeguard Style” video was an homage to the viral hit “Gangnam Style.” Officials say they were fired for using city property improperly, but one of the fired lifeguards says she was told by the city that they found the video “disgusting.”

2. An American student at Towson University is planning a “white-pride organization.” Matthew Heimbach, a U.S. history major, sparked controversy last year when his Youth for Western Civilization group criticized Islam and same-sex marriage. Heimbach says whites are discriminated against. Out of respect for free speech, university officials say the group will be tolerated.

3. About 2,000 people at the University of Guelph set a world record on Saturday by packaging 315,000 emergency relief meals in a single hour. The food help fight famine in Mauritania.

4. Iranian students are among those affected by the Canadian government’s closure of embassies. The embassies had provided confirmation of student status, handled Iranian military service exemptions and renewed passports. There were 3,247 Iranian students in Canada in 2010.

5. Beware of the “Turkey Syndrome.” That’s the advice a former residence advisor gave in an article on dealing with long-distance relationships. TS is “when residents go away for Thanksgiving and come back after that long weekend and they’ve broken up with their significant other.”

6. With a large amount of effort and a minimal amount of money you can grow food in your dorm room. Windsor’s The Lance newspaper has instructions.

7. Dalhousise University is mourning a Chinese student who died on Saturday while swimming in a Halifax lake. He was studying at the former Nova Scotia Agricultural College campus.

8. Maclean’s editors argue this week’s that what the NHL really needs are more Canadian teams.

9. Scott Feschuk has taken up screenwriting just in time for TIFF. If you want to laugh, read his script featuring the Ocean’s Eleven gang attempting to score something sweet and sticky in Quebec.

10. Two of the royal hounds, Monty and Cider, are dead. Monty, who was 13, starred in the Olympic opening ceremony alongside the Queen and Daniel Craig’s James Bond. RIP.