What students are talking about today (Sept. 13 edition) 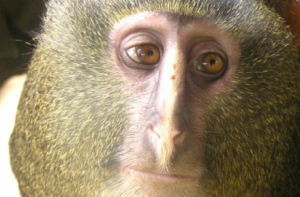 1. Scientists say they’ve discovered a new species of monkey living in the remote forests of the Democratic Republic of the Congo. It’s only the second new monkey discovered in nearly three decades. The researchers have published on Cercopithecus Lomamiensis in Plos One. The monkey is known to locals as “Lesula.” Okay, so in that way, it’s not an entirely new discovery.

4. Newsflash: stealing music is still illegal. A U.S. court has decided that a Minnesota woman who shared songs online owes record companies $222,000 for copyright violations. A lower judge apparently erred when he’d cut her fine to $54,000. The U.S. Supreme Court refused to hear an appeal from a Boston University student after a lower court decided he owed $675,000 for music.

5. The bizarre anti-Islam film that set off anti-American violence in at least four North African countries was posted to YouTube in June and translated into Arabic on YouTube in the days before Sept. 11, reports the New York Times. Strangely, it’s still unclear who exactly financed, produced and translated of the film that shows the Prophet Muhammad in very unbecoming ways.

6. Swimmers at the University of Alberta are upset that photos of them were downloaded from social media websites and circulated online with sexually explicit captions. It sounds like the type of thing that happens in high school, not university, but they’re asking the school to investigate.

7. This isn’t exactly important news, but there’s something about the inevitable fall from grace experienced by former child stars (think Lindsay Lohan, think Macaulay Culkin) that gets people talking. Amanda Bynes is the latest. Despite two hit-and-runs she was seen “driving aimlessly for hours Tuesday while smoking out of what appears to be a marijuana pipe on a suspended license.”

9. A 38-year-old Vancouver Island man was attacked by a cougar. His pants were shredded as he climbed to safety atop a piece of industrial equipment. It happened in Ahousat, near Tofino.

10. After two days of news about the ever-increasing cost of tuition, some relief for Manitoban students was announced. The province will drop the interest rate from prime plus 1.5 per cent to prime starting Sept. 1. As someone paying off Ontario student loans, I’m a little bit jealous.