What students are talking about today (Sept. 18 edition)

Freshman 15, politics in the classroom & anger at OCAD U. 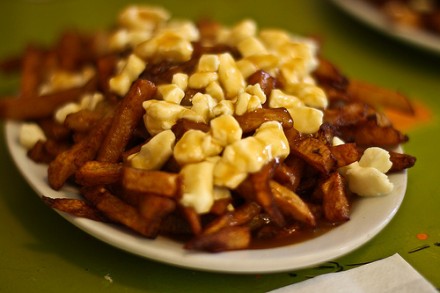 1. Yesterday there was a flash sale from Chartwells at the University of Prince Edward Island during which poutine was 50 per cent off for a few hours. Cadre reporter Josh Coles took on the breaking news assignment: “This poutine was weighty. Heavy. Thick.  I would compare its weight to that of a litre of chocolate milk,” he wrote.

2. The poutine and chocolate milk diet seems like evidence for that legendary Freshman 15 weight gain, but another study suggests the weight gain isn’t really 15 pounds. Researchers from Auburn University in Alabama showed that the Freshman 15 is really more like the Four-Year 12. After four years at the college, students in the study had gained an average of 11.7 pounds.

3. Homecoming will likely make a homecoming next year at Queen’s University after students finally behaved in public with just 12 arrests over the weekend compared to 124 in 2008. In an email sent Monday to the Queen’s community, Principal Daniel Woolf wrote that he’s working with “various members of our community, including alumni, to plan for the potential safe return of fall reunions in 2013.” The University Council asked Woolf to reinstate the tradition, which was barred after many years of alcohol-related arrests. See The Perils of Drinking on Canadian Campuses for more.

4. While the anti-tuition movement claims a partial victory for helping put the Parti Quebecois in power, Canadians got a reminder yesterday of what electing that party really means. The PQ removed the Maple Leaf from the National Assembly. It had hung there for nine years under federalist premier Jean Charest, whose Liberals were narrowly defeated earlier this month.

5. Yunel Escobar, the 29-year-old Cuban Toronto Blue Jays’ shortstop, could face discipline after appearing on the Rogers Centre field with a homophobic slur written under his eyes. His under-eye sticker said “TU ERE MARICON” which is commonly translated from Spanish as “You are a faggot.”

6. A video has surfaced in which Mitt Romney described 47 per cent of Americans as “people who pay no income tax” and are “dependent upon government.” He called them “victims” who feel “entitled to health care, to food, to housing, to you name it.” Romney’s 47 per cent figure comes from the Tax Policy Center, which found that 46.4 percent of households paid no federal income tax in 2011 after deductions and entitlements like Food Stamps and Medicare are taken into account.

7. Speaking of politics, a math instructor in Florida was suspended for distributing campaign material in class that said “I pledge to vote for President Obama and Democrats up and down the ticket.” While it’s naive to think professors could or should hide their opinions, this is over the line.

8. Kwantlen University evacuated parts of its Surrey campus on Tuesday morning after a pipe was found. Someone had reported it as a possible pipe bomb. Three U.S. universities faced bomb threats on the weekend. It’s an odd time of year for bomb scares—not even midterms yet.

9. A Western University student died after falling through a Canadian Pacific railway bridge near the London, Ont. campus around 3:00 a.m. on Saturday. The victim was Gareth Coombes, 23, a second-year HBA student at the Richard Ivey School of Business, reports The Gazette.

10. Students paid $180 each for a mandatory first-year art history textbook at OCAD University only to find out that it doesn’t even contain any art. They must go online to see the artworks associated with the pricey tome. More than 300 have signed a petitioning asking for a refund. Good for them.