What students are talking about today (Sept. 28 edition) 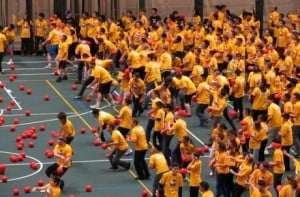 1. Students from the University of California Irvine shattered the Guinness World Record for the largest game of dodgeball this week with 6,084 players. The University of Alberta, a four-time record-holder, lost its standing. It had 4,979 players on Feb. 3. I bet they’ll try to get it back.

2. Western University’s homecoming parade will be held on campus today, rather than downtown. It’s because London Police won’t provide extra officers pro bono. (They may be busy anyway.)

3. People for the Ethical Treatment of Animals (PETA) will put up billboards near Saskatoon, Winnipeg and Ottawa schools this Thanksgiving holiday, reports The Canadian Press. The billboards will read: “Kids, if you wouldn’t eat your dog, why eat a turkey? Go vegan.”

4. Two new Indigenous language courses are at full capacity in the first year of them being offered at Queen’s University. Mohawk and Inuktitut have 30 students enrolled in each. Take that Spanish!

6. Calgary students aren’t happy with an Alderman’s suggestion that late night passengers be charged $5 extra to encourage more cabs on the roads late at night. This would hit students hard after nights on the town, which they can apparently afford so long as there isn’t a $5 surcharge.

7. Former Quebec student leader Gabriel Nadeau-Dubois failed to have his contempt-of-court charge thrown out. The former CLASSE leader is accused of encouraging people to continue blocking access to classes despite a court injunction that allowed students to return.

8. Some Ontario teachers are refusing to allow student teacher candidates into their classrooms because of a dispute over a wage freeze imposed by the government. Queen’s University is already having trouble finding students placements, which are necessary to graduate.

9. The University of Winnipeg’s Wesmen are looking for a more gender-inclusive name.

10. There’s a growing backlash from women against Rona Ambrose, Minister of State for the Status of Women, who voted in favour of a private member’s motion that would study when a fetus becomes a person. The bill is seen by some as an attempt to reopen the abortion debate. Of 294 MPs who voted on the bill, 91 cast votes in favour (87 Conservatives and 4 Liberals).