What's next for Quebec students?

Tuition hike protest is about more than just money 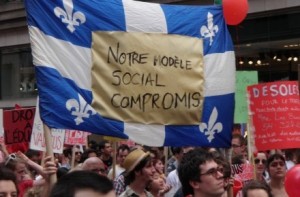 Students gathered en masse Thursday to protest Quebec’s plan to increase tuition by $1,625 over the next five years.

It’s impossible to say exactly how many attended the Montreal march, but it was one of the largest ever. Estimates range from 50,000 to 200,000. CBC News described the march as being “considerably larger than the one at Montreal’s famous 1995 pre-referendum rally.” I personally watched protesters pass through one intersection for over half an hour with no end in sight.

The march was the latest in a series of escalating protests, including the province-wide student “strike” during which thousands of students have skipped classes, some for over a month.

But now that the sun has set on the March 22 Day of Action, the big question is, what’s next?

The provincial government is demanding that students return to classes and warning of consequences. Quebec’s Liberals reaffirmed their commitment to the increases last week in the provincial budget. Education minister Line Beauchamp says she won’t negotiate.

During Quebec’s last student strike in 2005, FÉUQ agreed to end their action after the government offered a compromise, while an ASSÉ-organized coalition rejected the offer. Some continued to strike, but the movement petered out. Many considered FÉUQ’s compromise a betrayal.

The dilemma facing the student movement now is how to keep the pressure on Quebec City without alienating the public. Shutting down traffic in Montreal, blocking bridges, attempting to block access to the city’s port and clashes with police aren’t playing well with ordinary Quebecers.

A Léger Marketing poll for the Journal de Montréal found that 53 per cent support the government, 39 per cent the students and eight per cent didn’t know or refused to answer. However, 53 per cent in that same poll thought the government should negotiate and only 40 per cent said they shouldn’t.

The student strike still has the support of the nationalist Parti Québécois, the labour federations and a group of professors. At the Jutra Awards, Monsieur Lazhar director Philippe Falardeau accepted his prize for best picture wearing the symbol of the movement, a red cloth square.

Most striking is that the unions, the PQ and many students argue that this is about more than just tuition. They say it’s a breach of the social contract. It’s about a government turning its back on the values established during the Quiet Revolution, such as accessible higher education.

It’s telling, then, how many protesters on Thursday were carrying Quebec flags. There is a nationalist streak to the student movement in this province, for whom comparisons to Ontario or Alberta, where tuition is higher, are irrelevant—or at least no more relevant than comparisons to France.