Business? Engineering? Arts? You may be surprised. 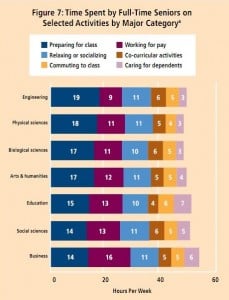 Engineering students have been known to curse friends in other majors. That’s because they often spend hours sitting in their residence rooms sweating over near impossible differential equations while their non-engineering roommates leisurely read a couple chapters and then head out to party.

Then again, ask an arts major how hard they’re working and they’ll start rattling off the number of essays they have due.

NSSE, considered the gold standard of student surveys, involved polling of senior year students at 683 U.S. and 68 Canadian institutions in 2011. It had a response rate of 33 per cent.