Why we should forget Einstein's tree-climbing fish

Prof. Pettigrew on how the genius truly viewed education 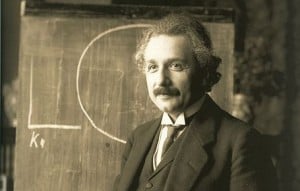 If there is one thing the internet loves, it’s an inspirational quotation from a famous person. In all manner of fonts, with all degrees of accuracy in punctuation, and with all manner of colourful photography, we are exhorted to improve ourselves, to accept ourselves for who we are, to be kind and compassionate to all, and to never take crap from a world full of idiots.

The quotation-based memes often touch on education and intelligence, and among the most ubiquitous is the following remark attributed to Albert Einstein:

“Everybody is a genius. But if you judge a fish by its ability to climb a tree, it will live its whole life believing that it is stupid.”

It doesn’t take much thought to see why this little gem is so popular—you can see some of the versions here. We all like to imagine that we are all, somewhere deep down, geniuses, and that the only reason we fail in school, or indeed, in life, is that our teachers and bosses can’t see our natural brilliance. We’re fish and those ignorant bastards are making us climb trees!

I dislike this little passage though. For while I would concede that various people have various relative strengths and weaknesses, it’s quite clear to anyone who really looks, that there are a great many people who are not geniuses in anything. They may be better at particular things than others, and perhaps even have a knack for some stuff. But genius? Shakespeare was a genius. Darwin was a genius. To say Uncle Eric is a genius because he can reach the green on the fourth fairway with a 7 iron—well that just debases the term.

But worse, lines like the supposed Einstein quote above reinforce an idea that is actually quite dangerous to education generally: the idea that some people are just good at some things are some are not. This notion is anathema to education because the whole notion of learning is that you can, well, learn things. Contrary to popular belief, you don’t have to have a special “math brain” to be able to understand the Pythagorean Theorem. And you don’t have to be “good at English” to be able to write a decent analysis of Death of a Salesman.

You just have to work hard and learn how to do it.

Of course, some have preferences and aptitudes for certain things, and a small minority of people have genuine cognitive impairments.  But the fish/tree analogy implies that for most, if not all people, there are many intellectual endeavours are simply, innately, impossible for them.

So Einstein was wrong about fish and trees and genius? Not exactly.

You see, as far as anyone can tell, Einstein never said it.

As the wonderful web site Quote Investigator shows, the whole tree and fish story emerged gradually from an allegory about the nature of education, finally resulting in the internet-friendly text in question which was then attributed to Einstein (perhaps because people think “Einstein” when they think “genius”?)

Would Einstein have approved of the quotation attributed to him? I was skeptical, and so I turned to a collection of Einstein’s writings which, as luck would have it, had an education section. There I found that Einstein probably didn’t think that everyone was a genius. If he did, he probably wouldn’t have written the following in 1952:

“There are only a few enlightened people with a lucid mind and style and with good taste within a century. What has been preserved of their work belongs among the most precious possessions of mankind.”

Moreover, it seems unlikely that Einstein would have endorsed courses of study suited to the particular aptitudes of the student. Rather, he seemed to support a broad education for the sake of general intellectual development. In an address he gave in 1936, for example, Einstein declared:

“I want to oppose the idea that the school has to teach directly that special knowledge and those accomplishments which one has to use later directly in life. The demands of life are much too manifold to let such a specialized training in school appear possible […] The development of general ability for independent thinking and judgement should always be placed foremost.”

Now if only we could get that all over the internet.