University of Calgary gets $40-million to spur entrepreneurship 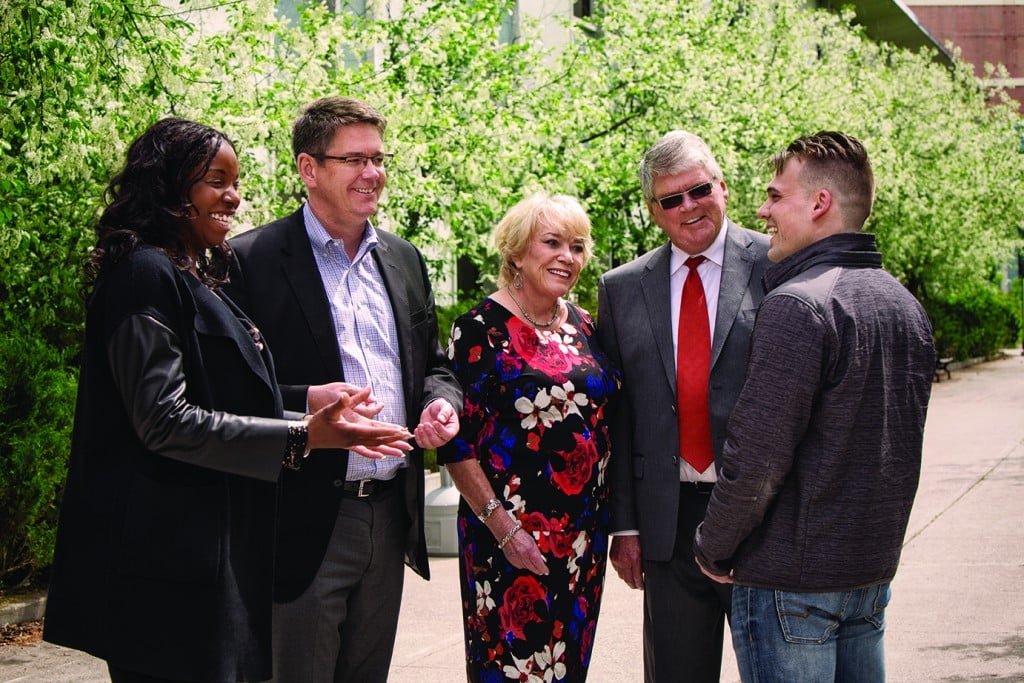 When she was an arts student at the University of Calgary in the 1960s, Diane Hunter says she had no opportunity to learn basic business skills.

So Hunter, who earned a bachelor’s degree and a Master of Arts in sociology at Calgary, thought it would be a “wonderful breakthrough” to enable arts students to launch their own business—either out of entrepreneurial drive or financial necessity.

Addressing this perceived need was the spark for a $40-million gift from the private Hunter Family Foundation  announced on May 31st by the university. The donation, one of the largest in the university’s history, will be used to develop new curriculum, expand entrepreneurial experiences for students and establish an interdisciplinary hub to foster campus-wide collaboration on new ventures.

The Hunters are past donors to the university, but the decision to make a major gift stems from a $5-million pledge they made in 2013 to establish a centre for entrepreneurship in their name at the university’s Haskayne School of Business.

“We were so pleased with the success of the Hunter Centre that we wanted to take it to the whole university,” says Hunter’s husband Douglas.

Discussions on the latest donation began a year ago between the university and the Hunter foundation, which was established in 1984 by oil and gas entrepreneur Douglas Hunter for his wife Diane, who serves as its president. Their son Derrick, an exploration geologist and founder of several companies, is also a trustee.

“We think of Calgary as a very entrepreneurial university but at the time the Hunter Centre was created we were not teaching entrepreneurship in our primary university,” says Derrick. “It felt to us like that was a major oversight that needed to be corrected,” he says. Business students, he adds, “don’t have the monopoly on entrepreneurial ideas.”

The new gift, to be dispersed over 12 years, comes as the university seeks to raise its profile as an entrepreneurial institution, an ambition strongly endorsed by students, according to Calgary president Elizabeth Cannon.

“The students were very clear in their feedback,” she says of their input in a recently approved institutional strategic plan for 2017-22. “They are very hungry for this kind of [entrepreneurship education] and this gives us a sense of urgency for us to get things in place early on.”

MORE: An insider look at the University of Calgary

Some new campus-wide programming will be offered this fall, including a pilot version of the hub for student-inspired start-ups. A larger, permanent hub, is expected to open somewhere near the centre of campus, within the next four years.

Meanwhile, the university is developing a new certificate in entrepreneurial thinking for interested students to “layer on” an additional skill to their bachelor degree, says Cannon.

“It will be fascinating to track the uptake of students as to their interest in the [new] curriculum and to see how this will really embed itself as part of the DNA of the University of Calgary,” she says.

Asked if there were any strings attached to the gift, Cannon replied “absolutely not.”

Haskayne dean Jim Dewald says he sees a growing “movement” on campus and in the city’s business community to recognize the value of entrepreneurship education. “It started with a challenge because a lot of people said you can’t teach people to be entrepreneurs,” he says.

Since its inception, the Hunter Centre has developed a summer incubator program for student-led start-ups at the university, offered two new entrepreneurship courses to any student on campus and created a similar program for high school students.

In 2013, the business school introduced a requirement for all second-year commerce students – 300 each semester – to take a course on entrepreneurship. Teams of five students receive coaching from about 180 industry mentors (many recruited by Derrick Hunter) to develop an idea for a start-up and figure out how to finance it. The top teams participate in a fast-pitch competition at the end of the year.

“It’s been quite transformational for the students,” says Dewald. “Anecdotally, it has caused a lot more students to think they have more options available to them.”

He says he expects only a few students, at most, to start their own business.  “But we expect 100 per cent of them to think like an entrepreneur whether they are working for a big company, the government or whatever.”

Meanwhile, the university is in the midst of a $1.3-billion capital campaign, with the Hunter gift expected to move the institution closer to its goal to earmark $100-million of the over-all fundraising drive for entrepreneurship-related activities.

“This is something that will set us apart from other universities in this country,” Cannon says of the donor-backed spotlight on entrepreneurship. “The campus is ready, it is an institutional priority and it wonderful having the Hunters come back and scale up their gift to allow us to do it right, get out of the gate and make an impact fast because students want it now.”