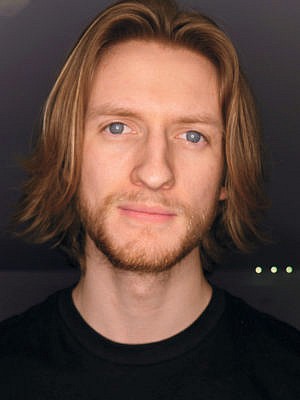 Why did you choose King’s?
When I decided I wanted to study journalism, I spent months researching programs at universities across the country. A co-worker of one of my parents directed my attention to King’s, saying all their favourite journalists were King’s alumni. The kicker for me was when I received a handwritten letter from President Bill Lahey responding to my application letter. The approachability of the administration and the small size of the school were very important to me in choosing a university.

Describe some of your best experiences so far.
Since 2017, I’ve worked as the broadcaster of the UKC athletics department. It’s provided me with technical experience as a journalist outside of the classroom. I also enjoy the campus bar, the King’s Wardroom, a student-run operation that provides a safe and accessible space for students to unwind after class. Not to mention it’s probably the most affordable Friday night you can have in Halifax.

Are you involved in extracurricular activities?
Being a member of the King’s Theatrical Society (KTS) was incredibly important for me in creating a network of friends in first year, and the time commitments were always flexible. I had roles in the cast and assisted with production from time to time.

What do you think of your professors?
The professors have been a highlight for me. The most incredible thing about having a small class size is how approachable and supportive the instructors are—something that is especially important in the J-school. Even when you’ve finished their course, they’ll continue to support you. I still have a handful of instructors whom I can text at any time for advice or an opinion.

What do you think of the school’s administration?
King’s and Dalhousie University are sister schools. As a King’s student, you can take Dal’s courses, use its facilities (gym, library, study halls) and take part in its extracurriculars. You can major in journalism at King’s and play Dal volleyball. However, this also ties both administrations—and many of the decisions they make—together. If Dalhousie closes its campus for the day, it’s likely King’s will, too.

What is off-campus life like in Halifax?
Halifax is an incredible place to study as a young adult. There is just the right amount of city to allow easy mobility, and it offers an impressive array of activities. However, it isn’t so large as to feel overwhelming. Within a month of living in Halifax, you’ll learn it’s impossible to get lost. There are also plenty of flexible employment opportunities on and around campus. In fact, at one point, I was working three jobs on top of my schooling.

If I wrote the school motto: ‘There’s more to learn after the foundation year’
Best place to live: On campus, Chapel Bay. Off-campus, as close to Quinpool Road as possible.
Best place to study: The Wardroom. Nothing pairs better with an assignment that I’m dreading than a cold pint.
Best campus events: The Wardroom’s Halloween party
Weirdest tradition: The Dante party
Best campus food: The Galley’s samosas with mango chutney
Best cheap lunch: The Galley’s samosas and a bottle of kombucha
Best pizza: Triple A topped with donair sauce
Best place for a fancy dinner: The Bicycle Thief
Best giveaway: Halifax’s Curbside Giveaway Weekend, which takes place every October. Residents around the city put their unused furniture and household items on the curb free for pickup.
Best bar for hanging out: The Oxford Taproom
Best live music venue: The Seahorse
Best hangover breakfast: The Ardmore Tea Room
Best place for a nap: The couches in the J-school
Best weekend activity: Skating at the Oval followed by an evening at the Oxford Taproom
The thing that surprised me most about the school: How many students at King’s aren’t from Nova Scotia
If I could change one thing about the school: I would invest more money in its athletics department