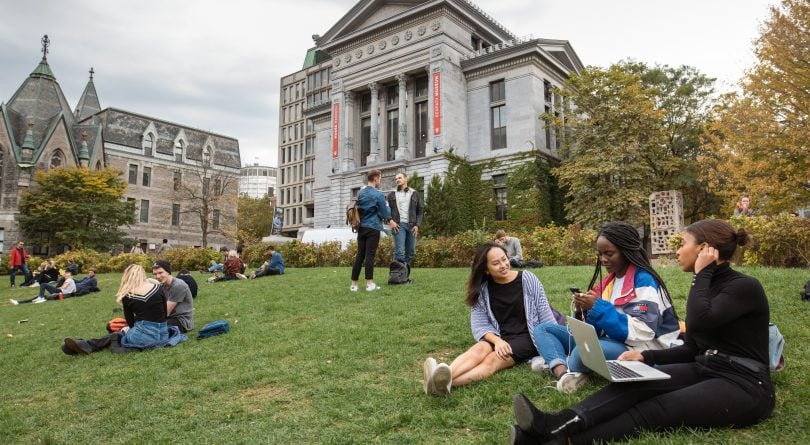 McGill University has long maintained a global reputation for its diverse and accomplished student body. The school boasts the largest number of Rhodes Scholars in Canada—144—and holds the title of the most internationally diverse university in Canada, with 30 per cent of students coming from abroad. Its Ph.D. programs and medical school have long garnered accolades, and 2018 was no exception.

Located in the heart of Montreal, the school is known for its cutting-edge research on a range of medical topics. This spring, it announced plans to develop a virtual-reality platform to train orthopaedic surgeons and neurosurgeons in advanced spinal surgery techniques. Once launched, the program will allow students to participate in simulations recreating the sensory experience of open-spine surgery in a safe and controlled environment.

This year also saw the launch of the McGill Interdisciplinary Initiative in Infection and Immunity, which brings together 250 investigators from the university and its affiliated hospitals to develop innovative solutions to immune threats to human health. The initiative’s research will focus on infections in vulnerable populations, and on finding solutions such as new vaccines and immunotherapies.

Meanwhile, the school’s celebrated Ludmer Centre for Neuroinformatics and Mental Health received a $10-million donation to establish a Global Brain Consortium of leading research institutions, focused on finding groundbreaking solutions to mental health and neurodegenerative diseases. Researchers at the Ludmer Centre this year developed what they call a personalized Therapeutic Intervention Fingerprint, which could be used to design drugs for a patient’s unique gene-expression profile.

These developments are just the most recent examples of the university’s storied track record of scientific innovation. Notable alumni include Thomas Chang, who led the invention of artificial blood cells to treat drug poisoning in the 1980s, and Sir Ernest Rutherford, who discovered divisible atoms in the early 20th century.

Just this year, Balfour Mount, Eric M. Flanders Emeritus Professor of Palliative Care, was recognized as a member of the 2018 Canadian Medical Hall of Fame. Mount is known for coining the term “palliative care” and for pioneering the idea that physicians should seek to alleviate suffering and enhance dignity for dying patients.

As students flock to the university’s medical school, McGill is taking steps to ensure that their time in the program is as positive and stress-free as possible. In 2015, it introduced the Ambassadors for Comprehensive Education program, which aims to create a smooth transition from undergraduate to med school by pairing first-year students with more senior peers. Last year, 120 of 180 medical students participated, with more than 90 per cent reporting that it “greatly reduced” their stress levels.