After four years leading our reputation ranking, U of T is tied with McGill for best Medical Doctoral school 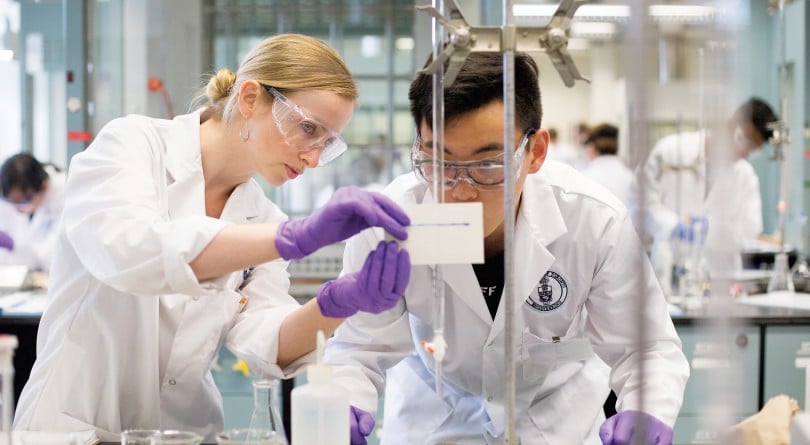 A Chemical Engineering class at the University of Toronto (Photo: Michelle Siu)

For years, the University of Toronto has wrestled McGill University to be “Harvard of the North,” a half-joking sobriquet meant to signify Canada’s top post-secondary institution.

McGill appeared to be winning, even being referenced as such on The Simpsons. The closest U of T came was playing Harvard on the big screen in the 1997 classic Good Will Hunting. But in this long-standing duel, the Toronto contender might have finally pulled ahead. For the first time since 2005, it has tied with McGill for the No. 1 spot on our ranking of Medical Doctoral universities. Using our current methodology, U of T has now occupied the top rung on 13 occasions, compared with McGill’s 16 victories.

For the fourth straight year, U of T also topped our annual Maclean’s national reputational rankings, based on a survey of university faculty and senior administrators, high school guidance counsellors and business people across the country.

Given its track record, it’s clear that U of T has cultivated a sterling reputation. But what specific factors contribute to this good name? Observers say it’s a combination of academic rigour, global outreach and sheer size.

“The reputation that it’s a tough school academically I think is a motivating factor for a lot of students,” says Paul Stoitsiadis, guidance department head at Don Mills Collegiate Institute in Toronto. “They’re not trying to just get by, they’re trying to be the best they can.”

Katherine Ammendolia, a guidance counsellor at Hamilton’s Orchard Park Secondary School, agrees U of T’s tough academic requirements help draw in students. “[Students] feel like their high school education has been validated because they got into U of T,” she says.

Out of the Don Mills students who apply to university, Stoitsiadis estimates that more than half have U of T as either their first or second choice. He believes the school’s age and legacy make it stand out among other Canadian universities. “We know that insulin was discovered at U of T. That one little fact is a big deal for a university,” Stoitsiadis adds. “Some universities may have a lot of bright students, but they don’t have a claim to fame. U of T has a bunch of those claims to fame.”

He notes that other schools—like Harvard—have taken centuries to build their renown. “I can’t think of an old school that doesn’t have an elite reputation,” he says. “I think age has a huge factor in a school’s reputation, and once they have this elite reputation, of course students are going to want to go there.”

The size of the school also contributes to its strong standing. With more than 70,000 undergraduates, U of T is Canada’s biggest school in the country’s biggest city. When Time Higher Education, a respected data and consulting company, ranked schools around the globe on various criteria, U of T was the only Canadian institution—and only one of three in the world—to be ranked in the top 50 for all 11 criteria that were analyzed. “U of T is so vast, there’s something for everyone there. Some universities that are smaller can only cater to certain programs,” Stoitsiadis says.

The size of the school leads to recruitment and professional opportunities for graduates, which in turn feeds its notoriety, says Ammendolia. The Rotman School of Management, for example, is known as a reliable source of talent for businesses. “There are corporations that go and grab the students from that program,” she says. “U of T doesn’t just sit on its own reputation. It still has international draw.”

McKinsey & Company, an international consulting firm, is one of the corporations that recruits U of T grads for their offices in Canada and abroad. “The university is rich in diversity of experiences and programs,” said Gregory Vainberg, who leads recruiting for McKinsey in Canada, in an email. “We have hired M.B.A.s, commerce undergrads, industrial engineers, J.D.s, master’s of innovation, international relations majors, the list goes on. We look for problem solving, entrepreneurship and the ability to collaborate in teams, and we find those qualities in many applicants from U of T.”

That reputation is increasingly being spread across the globe. In 2017, more than 19,000 of the school’s 90,000 students were international, an increase of about 8,000 students since 2012. At the same time, U of T has more than 140 exchange partner schools across six continents. These partners include internationally renowned schools such as University College London and ETH Zurich.

Niamh Burke, an international partnerships and study abroad manager at Trinity College Dublin—Ireland’s top-ranked university according to the QS World University Rankings—says U of T has a strong reputation at her school and is a popular destination for exchange students. “The universities have a long-established partnership in research collaboration and student exchange,” Burke told Maclean’s in an email. “Students who have undertaken their exchange program at U of T report having had a very positive experience with a good balance of academically challenging material while enjoying an exciting campus and city life.”

Even back at Don Mills Collegiate, Stoitsiadis says the 100 international students attending his school generally hope to continue on to U of T. “Those students often want to go to U of T because they know about Toronto, and they know about U of T in Toronto. They don’t know where Trent is or where Thunder Bay is. They have no clue. But they know where Toronto is. It’s a hub, it’s a place to be.”

At the end of the day, Stoitsiadis believes U of T might be worthy of the “Harvard of the North” moniker. “I think that a U of T education is just as good as a Harvard education,” he says.