A provincial program that waives tuition can be critical to access higher education, but the initiative—introduced in 2017—is not without its gaps 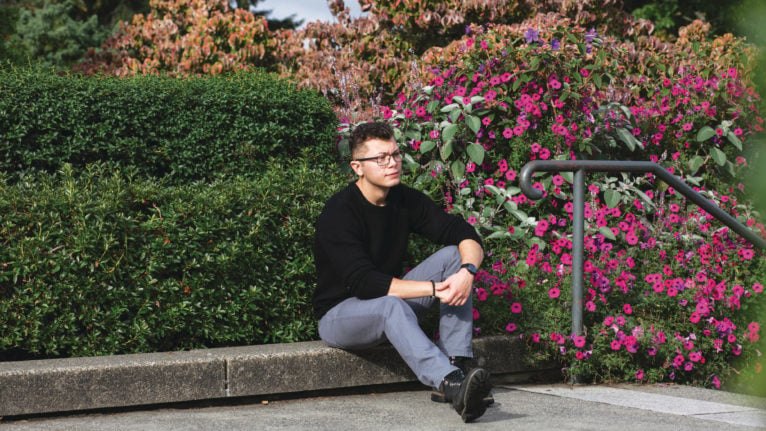 Nathaniel Ap* didn’t know what he wanted to do after high school. At age 17, he was renting a home (which he shared with a couple of East Vancouver “hippies,” in his words) as part of a Youth Agreement with the province of British Columbia after his family situation deteriorated. In other words, he was in the province’s care system.

Upon graduation he worked summer jobs, scooping ice cream and working at a bicycle shop among them. “I really had no university aspirations,” he says. Then he looked at his high school grades and realized he could apply to the University of British Columbia with the school’s tuition waiver for former youth in care—meaning he wouldn’t have to pay tuition at all. “It was just something that I kind of figured out on my own,” says Ap. Now 20, he’s in his third year of UBC’s history honours program and is doing well academically. He aged out of the Youth Agreement at 19 and is now on a provincial Agreement with Young Adults, which helps cover some of his basic living expenses. He’s still working a part-time job.

To say he’s defying the odds is an understatement. In B.C., only 51 per cent of youth in care graduate from high school. For Indigenous youth in care, who are heavily overrepresented in care systems across the country (as of 2016, 52.2 per cent of children in care in Canada are Indigenous, but account for only 7.7 per cent of the child population), the percentage drops to 44. Youth who have been in care die at five times the rate of other youth, according to a 2018 review by B.C.’s chief coroner’s office, which looked at 1,546 deaths of young adults between the ages of 17 and 25 between 2011 and 2016. Homelessness, poverty and drug addiction are other outcomes that often await youth aging out of care across the country. Offering free tuition to those touched by the care system opens doors to success in a world where they face dire systemic barriers—though the program has its gaps.

UBC’s tuition waiver program is the university’s version of a larger provincial initiative that offers free tuition to people between the ages of 19 and 27 who were formerly in B.C.’s care system for at least two cumulative years. In 2013, Mary Ellen Turpel-Lafond, B.C.’s then-representative for children and youth, challenged post-secondary institutions to begin offering the waivers. Vancouver Island University (VIU) was the first to step up that year, implementing a first iteration of the program just weeks after making the decision. Other schools followed suit and, in 2017, the new NDP government introduced a province-wide policy which made the waiver program available at 25 institutions instead of just 10. In 2018, it was expanded to include 10 union trades training schools. As of June 2020, 1,195 students are using the provincial waiver in B.C. Some institutions in other parts of Canada, including Manitoba, Alberta and Ontario, offer waivers as well.

Melanie Mark, B.C.’s minister of advanced education, skills and training, helped the provincial initiative come into being within the first six weeks of her appointment. As a First Nations woman with experience working at the Office of the Representative for Children and Youth and a former youth in care herself, she says having people with lived experience in office was instrumental to bringing the policy to fruition. “I wish someone gave a damn about people like me,” she says. “Education is the great equalizer. Murray Sinclair said education got us into this mess with respect to residential schools. It is also the key to get us out. So, to me, it is the tool, it is the medicine.”

For Ruby Barclay, 25, a graduate of VIU’s child and youth care program, the tuition waiver was life-changing. “I still talk about getting my acceptance letter as one of the best days of my life so far,” she says. “Growing up, I didn’t hear about going to university. It wasn’t something that was part of my home, or how I grew up. I was told by a lot of systems that I wasn’t going to make it.”

Barclay says she didn’t experience much future planning while in care. She thinks more could be done to encourage youth in care to follow their dreams and that there’s a huge gap in transition planning for youth aging out of the system. “Imagine the impact if we were to talk to the five- and six-year-olds [in care] about what they want to be when they grow up and where they’re going to go,” she says.

While the lack of future planning is an all-too-common experience for many former youth in care, Caroline Thompson, 37, says she was fortunate to have a supportive social worker who helped set her up with necessities such as furniture and checked up on her often when she aged out after spending 10 years in the care system. Thompson has roots in Tla-o-qui-aht First Nation and Alert Bay, B.C., and is living in Port Alberni, B.C., as a member of Tseshaht First Nation with her two sons. When she was 20, she started an Indigenous child and youth care diploma program back when VIU was still Malaspina University-College with funding help from her nation. But she had to drop out after giving birth to her first son and losing two grandparents in quick succession. She threw herself into the workforce and was working at three jobs before she thought, “Enough is enough.”

She decided to go back to school in 2018. By then, at age 35, she wasn’t eligible for the provincial program, because of its age limit. This points to what many see as a flaw in the program. Aging out of the system can be a long, difficult road, and some people aren’t ready to start school for several years. “We’ve had students who are mature learners coming back to study,” says William Litchfield, VIU’s associate vice-president of university relations and its chief advancement officer. “I remember speaking with one who was in their forties and they said, ‘Look, I’m not done. I still have so much to give and I still have so many dreams to achieve. And education is going to be the pathway forward.’ ”

From its inception, VIU’s waiver program did not have an age limit at all. Thompson received the waiver and is now enrolled in the school’s child and youth care program. “I’m really grateful for the resiliency I had within myself and was able to build with the people around me because I see the residential legacy effects,” says Thompson. “I come from a family of eight kids. I’m second oldest. And we all aged out of the system.”

VIU’s program is also broader because it requires only 12 months of cumulative time in care rather than the province’s 24. The university also realized after launching the program in 2013 that it’s not enough to offer free tuition and expect students to flourish. VIU has implemented full-time advisers as well as student peer support navigators who keep tuition-waiver students in the loop about opportunities and organize social events like holiday dinners for those who don’t have anywhere else to go. “This is a population that needs support in bridging to the campus community,” says Barclay. “I won’t forget spending my first Thanksgiving alone in the dorms.” She became VIU’s first peer support navigator in 2018. The connections and support systems created among students who are former youth in care make a difference in myriad ways. Nathaniel Ap, for instance, learned about funding for driving lessons for former youth in care from a fellow student.

Right now, Ap says he enjoys being able to embrace academia unhindered by financial expense. Without the waiver, he would not have had the option of post-secondary education; he thinks instead he would have “worked himself to death.” He adds: “The university experience is giving me access to opportunities I’ve never known and has opened my eyes to a better part of my own life.”