How to build a world-wide classroom 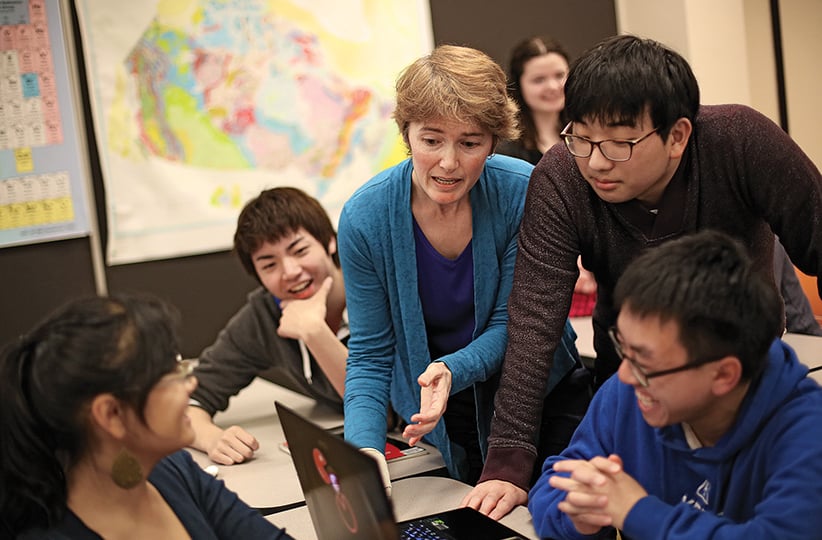 Sara Harris’s mission is to shake up the usual method of science education, which she describes as, “listen, write notes and try to make sense of it later.” Instead, the senior instructor in earth, ocean and atmospheric sciences at the University of British Columbia wants her students to make sense of the material before they leave class.

“I’m constantly rethinking what I want my students to get out of my classes, whether what I tried worked, and how I can make it better,” says Harris, who is one of 10 winners of this year’s 3M National Teaching Fellowship.

In large introductory classes, Harris’s students work on activities and worksheets in small groups. When they get stumped on a question or concept—which is frustrating if they’re at home alone and studying—it’s a great opportunity to learn, especially when there’s a teacher in the room to guide them. By the time they leave class, the students know what they don’t know, and what they need to spend the most time on when they study.

Harris dipped her toes into alternative science education during a seven-year “super-fun” stint at the Sea Education Association, a Massachusetts-based program that teaches environmental studies to university students at sea. “It was totally different than most of the classes at UBC. Everybody was on a 40-m boat for six weeks together,” Harris says.

The class, which is hosted on the platform Coursera, uses short lectures, readings, weekly quizzes and discussion threads to teach participants how to communicate about climate change in a well-informed way. The goal is to have “enough of the science background, so you can tell if your policy solutions align with the science,” Harris says. “There are wacky policy solutions that people espouse if they don’t know the science. As an expert, you forget the things you used to know, and the kind of wacky ideas you used to have.”

Together, the students made a crowd-sourced climate map of the world, applying their new knowledge to describe and analyze climatic changes happening around them. At a glance, it shows how the roiling climate has affected wine producers in Colorado, disaster preparedness in the Philippines, and a community garden’s growth in New Zealand.

Even the climate-change deniers who signed up out of spite had something to contribute. “That was fascinating, because it was a little online laboratory for how engagement works,” Harris says.

Taking teaching “beyond the walls of the institution and out into the community” is a value that the 3M teaching fellowships want to reward, says Robert Lapp, a Mount Allison University English professor, 2008 3M fellow, and president of the Society for Teaching and Learning in Higher Education, which gives out the award.

Bärbel Winkler, who lives in Germany, took the MOOC the first time it was offered. During the second session, she volunteered as a community teaching assistant, responding to students’ questions and monitoring the discussion forums.

“The most interesting thing was getting a chance to write about climate, and have that peer-reviewed by other students in the course. You get to see if what you have written makes sense to others,” Winkler says. “I learned about parts of the globe that I never thought about before.”

“Sara chimed in when we had questions,” Winkler added.

Harris made a conscious decision to focus on teaching rather than research, though she does study—what else?—evidence-based science education. She learned many of the techniques she uses through the Carl Wieman Science Education Initiative at UBC, and now supervises student-researchers such as Alison Jolley, whose undergraduate thesis was on post-secondary geology education. Harris has a light touch as a supervisor, and likes to give high-achieving students a problem to solve and the time and space to figure it out on their own.

“That supervisory experience, for me, is what has shaped my career,” says Jolley, who is now studying for her Ph.D., focusing on science education, in New Zealand. “I learned how much of a difference you can make [as a teacher] by coming to class excited, and conveying your own passions and interests to your students.”