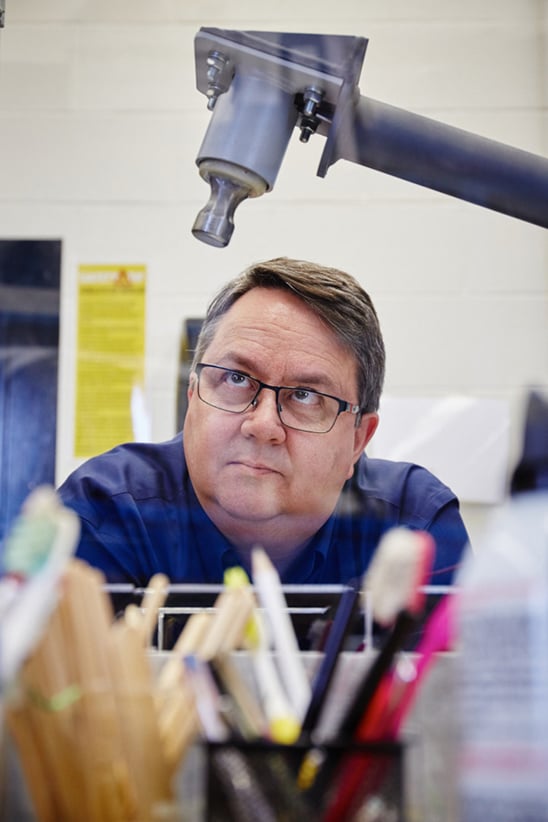 In certain circles, Laurentian University forensics professor Scott Fairgrieve is something of a celebrity. You may recognize him from Netflix’s true-crime hit Making A Murderer, where he testified for the defence in the 2007 trial of Steven Avery, though he’s also popped up on The Amazing Race Canada. As a forensic anthropologist, Fairgrieve has exhumed and identified the remains of victims of the Titanic, but his work with the Ontario Office of the Chief Coroner more frequently sees him testifying in court. “I’m often asked, ‘How much force did it take to cause this damage? And is the accused capable of that force?’ ”

It was a very difficult question to answer. “I didn’t have a way to calculate how much force was used,” he explains. Like most experts, Fairgrieve didn’t like this knowledge gap one bit, so he set out to fill it. “I envisioned a machine with a long armature that I could affix a weapon to,” he says, adding that he was inspired by the “cheesy little bird that dips its beak” in a water glass over and over again.

The head of forensic science at the university in Sudbury, Ont., took his problem to the coordinator of the fourth-year mechanical engineering class. “I said, ‘You’re gonna think this is crazy, but I need something to mimic the action of a human arm with a weapon.’ ” The result—nicknamed “the Traumatizer”—is a metre-wide tabletop invention that recreates the crime, where a pig’s corpse acts as the victim and the armature is the attacker. “It grips a particular implement, whether a hammer or a knife, and recreates sharp or blunt-force trauma,” says Fairgrieve. The device has a switchboard connecting it to an external computer that collects data on the speed, force and torque necessary to create a wound.

In the future, Fairgrieve is hoping it might accommodate more than hammer or knife, and exclude weapons that don’t fit a crime. The results will help forensic scientists tell a story about what exactly happened at a crime scene and, if they’re lucky, point to who did it. “I want to able to say something about the type and amount of force that was necessary to commit this crime,” says Fairgrieve. “Then I can talk intelligently about it in a court of law.”