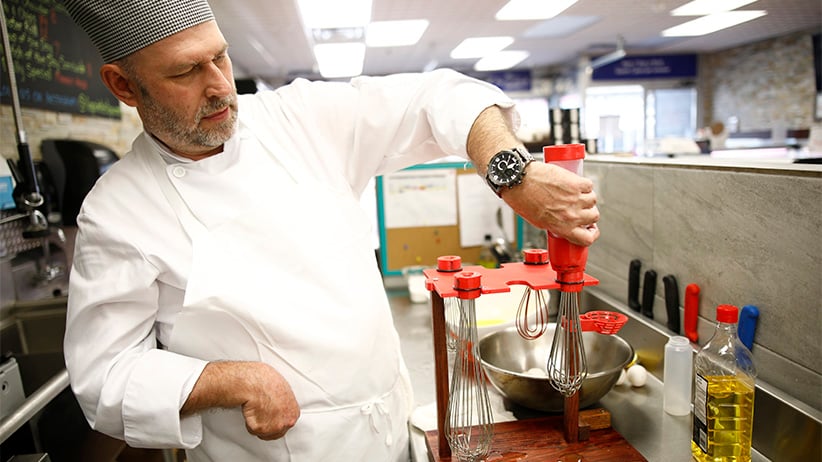 J.D. Skene is working on a line of kitchen tools that would make tasks like whisking easier for people with disabilities

To explain what life’s like for him, John-David Skene sets students a task. “I give [them] a pencil, ruler and a piece of paper,” says the 51-year-old from Ottawa. “Then I give them an oven mitt to place on their dominant hand.” Now comes the challenge for the students at Toronto’s George Brown College: “Draw a straight line on the paper,” he instructs. When the students struggle with the impossible assignment, he reveals this as his daily reality. “That’s what the kitchen feels like to me all the time.”

Skene, better known as J.D., has cerebral palsy and very limited use of his right side. Still, he loves to cook, and his resumé includes a degree in culinary skills from Algonquin College.

If you haven’t once thought about what your kitchen might be like if you had a disability, don’t feel too bad. “None of us have,” explains James McIntyre, George Brown professor of mechanical engineering and design, who brought Skene into class. Students are typically 18 and able-bodied, which is why a partnership with a developer like Skene is invaluable. “Think about trying to slice a carrot with one hand,” McIntyre says. “Just imagine how difficult that would be.”

After one of those serendipitous friend-of-a-friend referrals—McIntyre’s sister has a cottage near Skene’s—engineers at George Brown approached Skene for a gadget idea that might make life easier for people with disabilities working in kitchens. He delivered 20, including a one-handed whisk. “When you’re making an oil-vinaigrette dressing, you pour the oil and whisk at the same time. I can’t do that.”

Only now he can, thanks to the Whiskpenser. “We replaced the handle with a squeeze bottle, with a valve so you can dispense and whisk at once,” says Skene, who owns all rights and is looking for a distributor. McIntyre envisions the utensil in commercial kitchens, even for chefs with full mobility. “I don’t have a disability, but I’m always carrying a kid in my kitchen,” says McIntyre. “The Whiskpenser would be very helpful.”

How to be a kitchen-gadget designer

Other pathways: A degree or diploma in mechanical engineering or business would be helpful