After a suicide attempt, football became Jeremy Pearce's ticket out of a dead-end life

His football coach had never met anyone who had been through so much at his age. 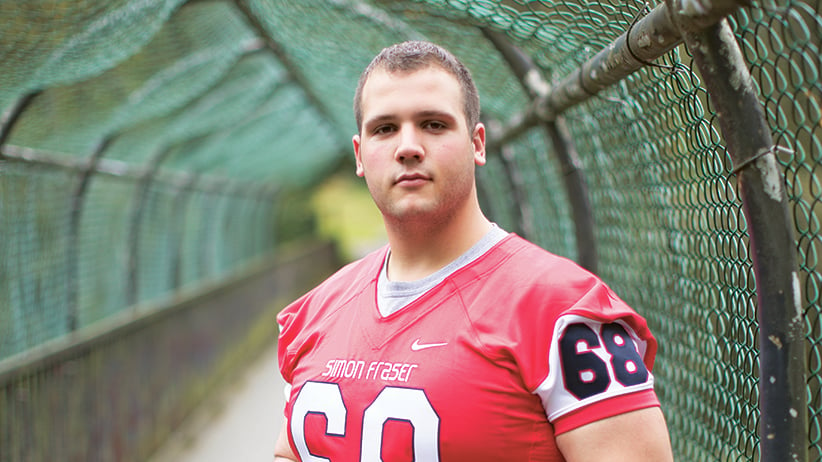 For a while, it seemed as though Jeremy Pearce was fated to make a living hoisting boxes in a warehouse. That was before he got into Simon Fraser University, and before he won the Terry Fox gold medal for demonstrating courage in the face of adversity.

Back then, Pearce, a gentle giant built like a brick wall, was working the night shift in a Wal-Mart stockroom and struggling to pay the rent. For a stretch, he slept in his car, pushing the passenger seat back as far as it would go to make room for his six-foot-three, 360-lb. frame.

A suicide attempt lit a fire in Pearce, directing his focus to a single goal: earning a football scholarship that would get him out of Hamilton, far away from a childhood marked by the clichés of criminal pathology: poverty, hunger, violence, alcoholism.

It is a remarkable tale of survival against all odds. Unlike most university athletes, who spend a decade or more honing their skills, Pearce had played a single year of organized football. It is a miracle he is even here to tell his story. What saved him was precisely what made him such an unstoppable force on the field: his massive size.

Pearce and his older sister grew up on a dairy farm on the outskirts of the city. Their father had trouble controlling his anger, and his hands. When he got mad, Pearce’s mom took them to the Hamilton airport to watch planes until it was safe to return. They left for good when Pearce was 12. Within three months, his mother met her second husband, another violent man whom she escaped by running to a battered women’s shelter.

By Grade 9, Pearce was bouncing between his parents’ homes, trying to gauge the “lesser of two evils.” He changed schools three times that year, barely attending any of them. In the summer, he landed the Wal-Mart job and moved out. After unloading boxes all night, he was too tired to get up at 7 a.m. “School was optional, but I had to work,” he says.

He figured out a budget, and cut corners wherever he could. He owned one shirt and a Hamilton Tiger-Cats jersey, which he wore every day. He ate the same thing for breakfast and dinner: a box of Kraft dinner, and three wieners cut into pieces and cooked in the microwave. Still, he was always short of money. “One of the first realizations that I hadn’t planned as well as I thought I had came down to toilet paper.” That was $6 he didn’t have. Next it was the hydro bill. Then a friend proposed a solution: Pearce, who didn’t use drugs, could hold on to a small amount of marijuana to sell to their buddies, earning enough to make ends meet. But the operation quickly grew, and a rival dealer must have heard about his sales. One night, Pearce opened the door to find two men running toward him. After a scuffle, one put a knife to Pearce’s throat. They locked him on the balcony, ransacked his apartment and stole everything.

Pearce, later diagnosed with acute post-traumatic stress, sank into a depression. He was fired for missing a shift, then he lost the apartment. For months, he couch-surfed and slept in his car. Then he flunked out of school.

“Even that crappy life had been taken,” he says. When he closed his eyes or heard a loud noise, he felt that cold blade against his throat and smelled his attacker’s hot breath. His heart would pound and his shirt would be drenched with sweat. He started drinking and using cocaine to combat the fear and self-loathing. He was “a zombie,” he admits.

One day, Pearce turned up at his mom’s house, triggering an ugly fight between her and his stepfather. In the bedroom, he looked in the mirror and thought about how he ruined everything he touched. He slammed a fist against his reflection, shattering it, and grabbed two vials of pills with his bloodied hand: antidepressants and heavy-duty sleep medications. He swallowed 30 and drove to the Hamilton airport, where he waited to die. “I had nothing to live for. I had accepted death.”

His mother saw the empty pill bottles and called the police, who found him and rushed him to hospital. ER doctors were astonished Pearce was still breathing: They said he’d ingested enough drugs to kill a horse. Only his size had saved him from an overdose.

Lying on a gurney, he wondered if there was a reason he had survived. He tried to picture the last time he felt happy: It was on the football field, in Grade 9. The sport had given him an identity. It had given his chaotic, violent life a frame. Through friends, he tracked down a number for Trevor Knoll, the new coach at Bishop Tonnos Catholic Secondary School, and begged Knoll to let him try out.

Knoll took an immediate shine to Pearce, who’d “clearly been through more than anyone his age.” The coach’s intentions in convincing the school to take him back were noble. But he also knew he had a ringer on his hands. Pearce was more than 100 lb. heavier than the Titans’ biggest player. His jersey barely covered his ribs, leaving his pads and belly exposed.

Bishop Tonnos was an affluent school, proud of its reputation as one of the region’s better high schools. Pearce could not have fit in less. Of his eight Grade 11 classes, he’d passed two, and one of those was gym. He’d been sensationally absent, attending one-third of classes. The vice-principal consented. “But he’s your liability,” she warned the coach. Teachers were peeved, says Knoll, and some wanted Pearce to fail.

Pearce moved in with an aunt who lived outside the school district, so Knoll started picking him up for school at 7 a.m. every day, bringing him a bagged lunch. The teen would join him in the teachers’ lounge, where he did homework for the first time. Soon he was working through lunch, too. Until then, says Pearce, “I’d never had any men to look up to—whose behaviour I wanted to emulate.” Knoll had come to see him as “a younger brother.” It turns out that a crappy childhood was excellent preparation for football; he was combative, angry, merciless. When Knoll told him he was good enough to play university football, Pearce grabbed on to the dream. It would be his escape. He wouldn’t let it go.

But no Canadian university would give Pearce a scholarship—he didn’t have the 80 per cent average that Canadian Interuniversity Sport (CIS) requires. Pearce felt he had one shot: a pre-season exhibition in Ohio against Warren G. Harding High, where football is a religion—14,000 people turn out for games and cannons celebrate every victory. Eight of their players had signed scholarships with NCAA Division I schools (the elite tier), including the defensive tackle Pearce was lined up against. He would use the game to show he could compete with some of the top U.S. freshman picks. By then, he’d been made a captain, and it’s no coincidence that the Titans were knocked out of the playoffs in the only game Pearce sat out, after taking a helmet to his knee.

From the grainy videotape SFU head coach Dave Johnson received out of the blue, he couldn’t tell how much Pearce had contributed to the game. The score didn’t help: Bishop Tonnos lost 50-0. But Johnson saw a lineman’s ideal specifications: the girth of a sumo wrestler and the agility of a ballet dancer. Pearce was a wall, but his feet were nimble and quick. “That game,” Pearce says, “got me into a school I had no right to be in.”

As the plane climbed higher, Pearce finally allowed himself to breathe; Hamilton hadn’t crushed him, no matter how tough it had been. He started to cry, then he couldn’t stop.“People must have thought I was the strangest guy on the plane, this 360-lb. guy bawling my eyes out.” When SFU assistant coach Ron Turner met him at Vancouver airport, “he looked like he was in shock.” It was Pearce’s first time on a plane and only the second time he’d left Ontario. On the field, Turner could tell he was “green as grass.” Training camp, which he entered at 363 lb., “almost killed him.” By the end of the season, he was down to 298.

The change wasn’t just physical. Every time he got off the field, he was “cracking the books, rewriting notes, rereading chapters,” terrified he would fail. To his shock, Pearce finished the semester with a 3.4 grade point average out of 4, which he maintained for four years.

Last year, Pearce decided to repay a debt he felt he owed society for “the mistakes I made,” and “for giving me that second chance.” He raised money for Big Brother, and became one himself. Sport had been his salvation, so he raised money for the Special Olympics and founded SFU Team Up, which pairs university athletes with at-risk kids. Then he raised $1,050 for Burnaby Safe House, an amount that would have covered his mother’s stay at the Hamilton shelter. 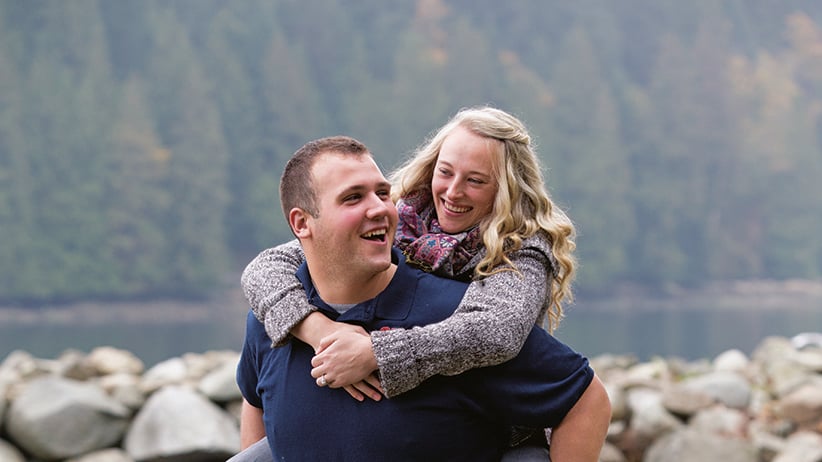 These days, Pearce, 23, is starting a family of his own. On Aug. 29, he proposed to his long-time girlfriend, Samantha Olexa, an SFU softball player training to be a police officer. This spring, they’ll both graduate with criminology-sociology degrees. Pearce hopes to join the Vancouver police department, where he’d like to work in the Downtown Eastside. “You don’t grow up wanting to live in social housing, with bedbugs, not knowing where your next meal is going to come from,” he explains. “When I say, ‘I understand,’ I mean it.” That’s the approach he takes as a program assistant at an addiction treatment centre, where twice he has convinced suicidal young men not to take their lives.

Since starting at SFU, he’s only been back to Hamilton once. He loves the Lower Mainland, the hiking tails and the healthy lifestyle. But he still talks to Knoll. Every conversation ends the same way: “I’m so proud of you,” Knoll will say. “I wouldn’t be here without you,” Pearce will reply.

So what would he say to the guys who put a knife to his throat six years ago? “I’d want to thank them,” he says. “It was traumatic, but, without that incident, I don’t know what avenue my life would have taken.” These days, he celebrates adversity, knowing it took a lost teen to forge an incredibly strong man. 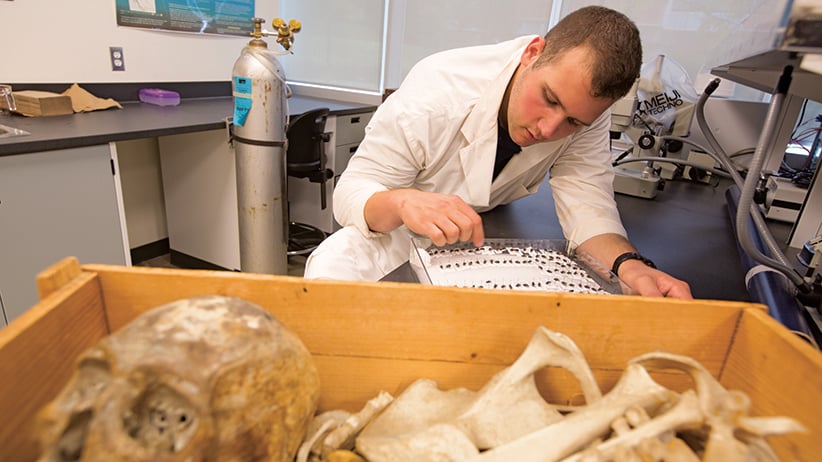