Green acres are flourishing on campus rooftops across the country 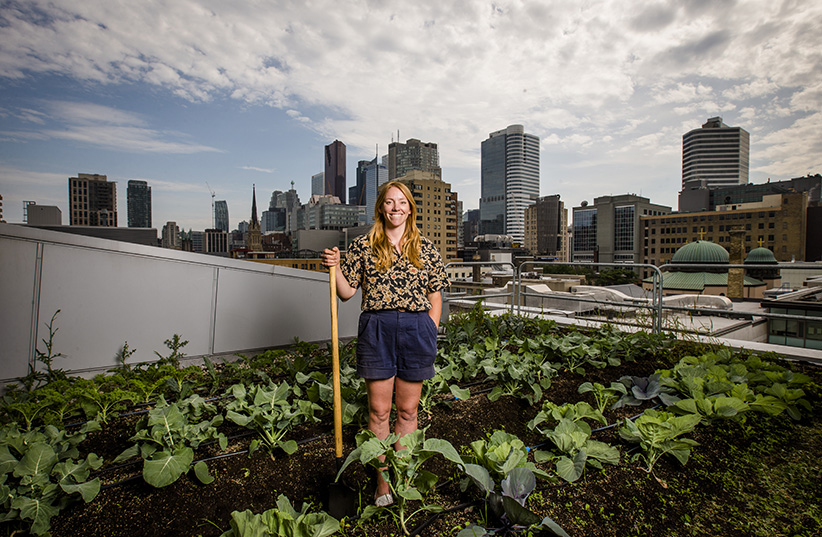 Rooftop gardens are having a moment at Canada’s universities. The eco-benefits of green roofs cycling storm water away from the sewage system, combined with the health and social benefits of growing fresh food for consumption right on campus, make the concept a win-win.

Ryerson has been ahead of the urban farming curve. About 10 years ago, says Mark Gorgolewski, a professor in the department of architectural science, CarrotCity.org was formed. “A group of architecture students were interested in food issues,” he says, “and wanted to do thesis projects that addressed the relevance of architectural design to urban food growth, preparation and enjoyment.”

From this student work flourished a website database, a book, a symposium and a travelling exhibition. By 2011, the group was involved in early efforts at growing food in various underutilized spaces around campus. In 2013, production was centralized on (and elevated to) the 10,000-sq.-foot Ryerson Urban Farm atop the George Vari Engineering and Computing Centre. The rooftop had been built as a green space, and from its opening in 2003, when it was known as the Andrew and Valerie Pringle Environmental Green Roof, it has been planted with day lilies and some 80 varieties of local weeds.

All those weeds created “rich, organic life” in the soil, says Arlene Throness, the Urban Farm manager, which they sheet-mulched and deepened for food production.

The Urban Farm now operates on a five-year crop rotation; there are 30 different crops and hundreds of cultivars. Members from the student body, staff and surrounding community all tend to the space and take home a basket of food a week as return on investment. Some produce is sold on campus at a farmers’ market; some is sold to campus kitchens. The yield, says Throness, is some 8,000 lb. a year.

The architecture connection still stands, though Urban Farm also crosses over into other faculties at the school, including nutrition, as well as environmental sciences.

The green is spreading: At OCADU there is a greenhouse that operates with no electricity and can produce lettuce in the dead of winter. Trent, the University of Toronto and Concordia all have greenhouse gardens in the sky.

And at the University of Saskatchewan, an opportunity arose on top of the phytotron (a research greenhouse). The condensers were moved, leaving a bare expanse visible from an open walkway.

“Aha,” said Grant Wood, a professor of urban agriculture, who worked with the university’s office of sustainability to come up with “the rooftop.” After getting the engineering students to check on load-bearing weights, and “a lot of paperwork,” says Wood, pallets and recycled containers were moved onto the roof. The team started with 500 sq. feet of planting, for a yield of about a thousand pounds of produce this past year; the goal is to double that next year.

The garden is being used as a teaching space for both university classes in various disciplines and agricultural camps for school kids over the summer. Crops are sold to campus food services, which advertise the fresh bounty the way restaurants point to local suppliers on their menus.

“We grow the veggies, sell them to culinary services,” says Woods. “They feed students and staff and then put the waste into a dehydrator that goes back into compost. It all takes place in less than a mile. We are working in food feet: sustainability at its ultimate.”