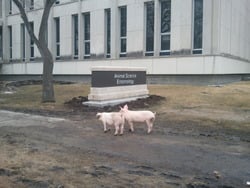 Some students and staff at the University of Manitoba came across an unusual site Friday afternoon, as pigs were seen roaming the Fort Garry campus according to The Manitoban,

Engineering student David McGinn spotted the pigs outside the Animal Science and Entomology building and sent my colleague Leif Larsen, Manitoban editor-in-chief, the photo above. The pigs were reported wandering through various other places on campus as well.

The university’s security services department confirmed that there were definitely pigs loose on campus, but didn’t say when or how the pigs had gotten free, or how long they were out.

Apparently they were out long enough for someone to create a Twitter account for one of the pigs, which was able to rack up over 40 followers in under 24 hours. That may not be Charlie Sheen-esque Twitter fame, but it’s not bad for a pig.