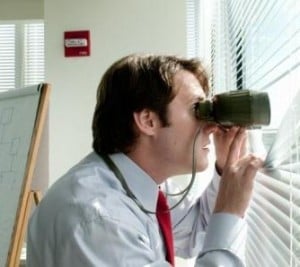 To some it may seem the University of Lethbridge has decided to fund research in pursuit of the comedic and mirthful, but make no mistake—one graduate student has been awarded $7,714 to assess and analyze “the ‘government version’ of the events that gave rise to the GWOT [Global War On Terrorism].”

Masters student Joshua Blakeney has been granted the Queen Elizabeth II Graduate Scholarship for his research entitled “The Origins of the Global War on Terror: Academic Debates and Interpretive Controversies.” Blakeney, former Media Coordinator of Globalization Studies at U of L, is a vocal adherent to the 9/11 “Truth Movement,” which contends that the World Trade Center attacks were orchestrated by the U.S. in order to justify future invasions of Iraq and Afghanistan. Blakeney has confronted reporters such as Peter Mansbridge for their compliance in propagating mainstream 9/11 “lies,” and also gleefully rejoiced in pundit Christopher Hitchens’ cancer diagnosis, calling it a “boon to humanity.”

Blakeney, who studies under well-known 9/11 truth-seeker Anthony Hall, has now been awarded money by the university to put these theories to paper. Money which, as Jonathan Kay in the National Post points out, comes in part from Alberta tax dollars. “Paying a British graduate student $7,714 to pursue his conspiracy theory that the 9/11 attacks were staged by Washington,” Kay writes, “Does anyone else see a problem with that?”

The lunacy, of course, is readily apparent. I’m sure few Albertans would rejoice in hearing that their dollars are being used to fund conspiracy theories. However, (and as much as it pains me to pen any sort of defense) the expectation of graduate research is that it challenges the status quo and seeks to break through conventional belief.

Granted, I have little faith that Blakeney will challenge his own beliefs, let alone that his thesis will amount to much beyond the 9/11 jabber he’s already touting, but academic freedom would be compromised if taxpayers could suddenly decide which theses were worth their dollar. Indeed, I think the outrage is warranted and the awards committee should give their heads a shake, but if anything, this situation just reinforces the need to establish a fully private post-secondary education system. At least in that case your provincial taxes won’t go towards proving the mendacity of the moon landing.