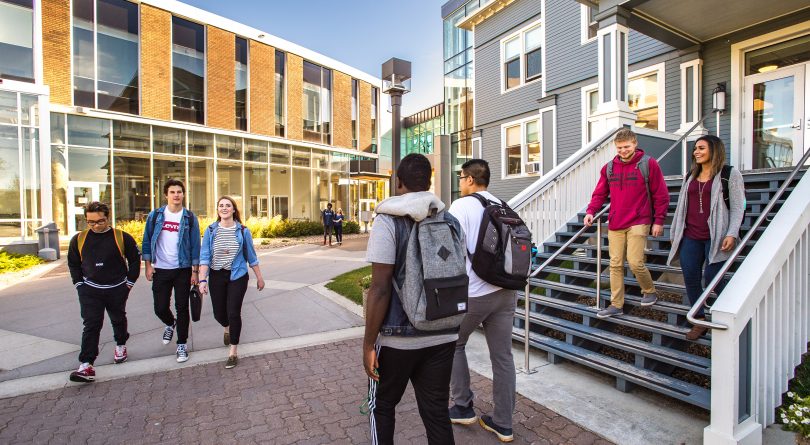 If I wrote the school motto:
“U of A: we’re pretty obsessed with rank”
Best place for a nap:
The quiet lounge in the Students’ Union Building (SUB)
Best cheap lunch:
The A&W inside HUB Mall
Best bar for hanging out:
Room at the Top. Its seventh-floor view of campus makes up for the sometimes-patchy service.
Favourite campus food:
Hula Poké
Best hangover breakfast:
Dewey’s, as their breakfast menu runs till 5 p.m.
Best place to live:
Lister Centre is always an option for first-year students looking to meet new friends
Best place to study:
The Rutherford Library North is pretty good if you don’t want to have a Hunger Games-style competition for the nearest power outlet
Weirdest tradition:
There’s one where students see if they can finish a Marco’s Famous Tombstone donair in one sitting. I suspect those who complete the challenge soon enter a caloric coma and are never heard from again.
Best campus event:
Trivia nights at Room at the Top every Tuesday.
What surprised me most about the school:
How much drama there is in university politics
Best giveaway:
The Gateway magazine
If I could change one thing about the school:
Have better elevators in the Students’ Union Building. They’re indescribably bad.

Why did I go to the University of Alberta? Because I was born and raised in Edmonton—and I didn’t really want to move. So I had a choice between MacEwan University and the U of A. It was the latter’s superior reputation that did it for me.

Attending the U of A for the last six years was a safe decision, but it wasn’t a bad decision. It a cliché to say you found “your people” while at university, but that’s true for me. But it’s pretty effortless to find “your people” at a school with 31,000 undergraduates and hundreds of student groups, from the Debate Society to the Hide and Seek Club. For me, those connections outweigh the less positive aspects of university, like pulling an all-nighter to finish a 20-page essay.

For those planning to attend the U of A, Edmonton can seem frigid and barren. You’re guaranteed at least five months of -20° C weather (-40 if you’re unlucky). Additionally, public transit can be a pain. But the campus community almost makes up for these shortcomings. It really feels like the U of A is a miniature 92-hectare city within Edmonton. As you spend more time on campus, it won’t be long until you feel like you’ve found your place.

The U of A isn’t perfect. There’s always drama somewhere, whether it be within your favourite student group or as the Students’ Union protests fee increases. But compared to other schools, things are pretty good.

After Class
For those who can afford to tear themselves away from their studies, there’s an abundance of things to do. You can hang out with your department association or join a 109-year-old institution like the Gateway, the student magazine.
While the university has no journalism program, anyone interested in learning the basics can always pay the Gateway’s office a visit. Those who join it can add their names to a long list of accomplished alumni like Edmonton mayor Don Iveson and former chief justice Beverley McLachlin.

Local Vibe
I was pretty mean to Edmonton earlier, but there are some cool things to be found. Whyte Avenue offers tons of cafés, stores and restaurants. Be sure to check out the Old Strathcona Antique Mall nearby. And if that isn’t your thing, visit the Garneau neighbourhood east of campus. Remedy Café on 109 Street will be a favourite study spot during your degree and the Metro Cinema across the street offers a student discount.

More Info
The unofficial uAlberta subreddit is a good place to get your U of A questions answered. Same goes for the Facebook page Overheard at the U of A.