U of T tries a fresh new take on residence food

How one chef turned the mighty U of T St. George kitchens toward independent, locally sourced food made from scratch 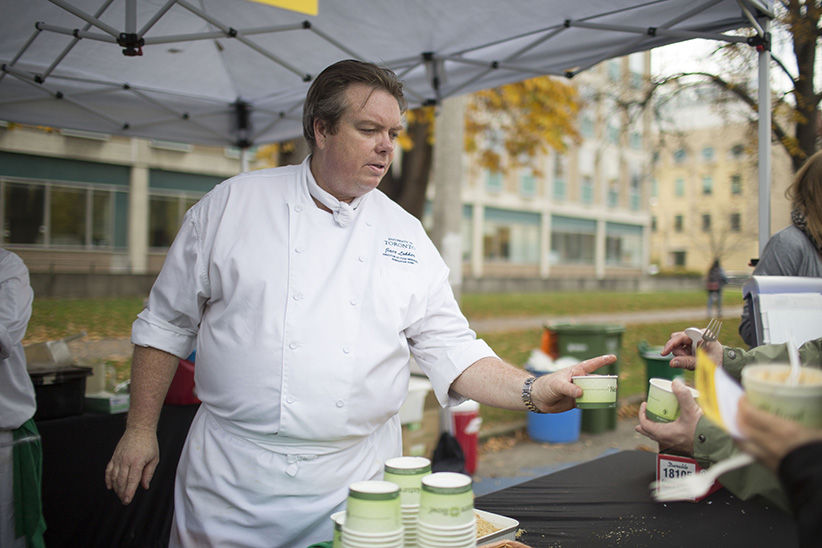 Chef Jaco Lokker is the Director of Food Services and Executive Chef at the University of Toronto. (Carlos Osorio/Toronto Star/Getty Images)

Jaco Lokker and his head chefs stand around a table at the University of Toronto’s Chestnut Residence kitchen, looking at halves of sandwiches. All summer they have been developing recipes and menus. “I personally don’t believe Russian dressing belongs on a Reuben,” says Lokker to Suman Roy, executive chef for the campus retail outlets. Roy had made the grave error of suggesting the dressing on the classic sandwich, which they would be serving at a deli station.

Every day, executive chef Lokker makes his rounds across the University of Toronto’s downtown campus. He goes to the New College dining hall, to the Athletic Centre’s café, to Robarts Library and then the Medical Sciences building, making sure the kitchen in each is running smoothly. As he walks by the historic University College courtyard, he takes in the fall scene.

The trip from each building is a quiet reprieve from the bustle of the kitchens. “This is my favourite part of the day,” he says, walking through the throng of students in his white chef jacket. “It keeps you youthful.”

Fifteen years ago, Lokker, 49, never would have guessed he’d go from running a kitchen at the Colony Hotel in downtown Toronto, to becoming director of culinary operations and executive chef at the St. George campus. (The Colony was purchased by U of T in 2004, and transformed into a student residence that houses 1,200.)

Not only that, but under Lokker’s leadership, kitchens here have converted to fresh, innovative, scratch-cooking facilities. “I’m very much a believer in wholesome and whole foods,” says Lokker. He says that as a university, they are in the right landscape to affect the habits people form in adulthood. “Here’s the moment when people are making choices in their life,” he says. “We have the social responsibility.” 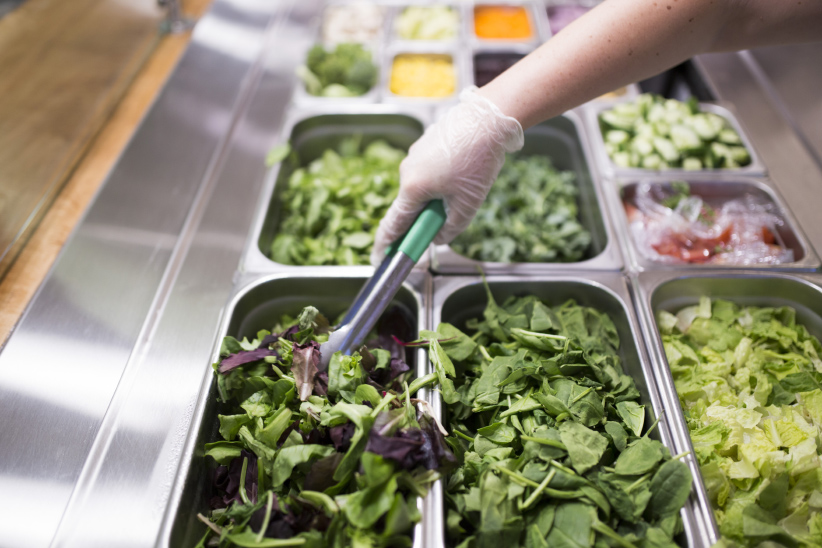 A student at the salad bar at University of Toronto’s new St. George campus cafeteria. (Photograph by Nick Iwanyshyn).

In January 2016 U of T announced that it would not be renewing its contract with the third-party food service company Aramark, which had operated at the school for over 10 years. Instead, it would be providing food services independently across the entire St. George campus. Since that means feeding nearly 85,000 students, it would prove no easy task.

“It’s a very, very big decision,” said Anne Macdonald, director of ancillary services. “I would say the first notions of this would have been more than two years [ago].”

She says that over the years, management had taken a more active role in overseeing Aramark’s operations, and since the Chestnut Residence was already independent, the move made sense. “The self-operation model is not new to us,” she says. “ We had it in a couple of places already.”

Over the summer Macdonald says the university tried negotiating contracts with franchise locations like Spring Rolls and Subway, who previously operated with Aramark. As the start of the school year drew near, the university ended those negotiations. Lokker and his team created four entirely new retail concepts in a matter of weeks.

MORE: Does U of T’s food program stand up to a food critic?

But at U of T, it’s only independent on the St. George campus. Colleges within the university that are separate, like Trinity, Victoria and Woodsworth, as well as the Scarborough and Mississauga campuses, are staying with third-party service.

At Chestnut, staff prepare approximately 400 sandwiches a day for grab-and-go stations scattered across the St. George campus. Both catering and grab-and-go meals are prepared in the facility, because of the sheer size of the kitchens, in addition to meals for the Chestnut residence.

By 4 p.m., the night crew are making sandwiches for the next day. Around one table, five cooks stand chopping fruits and veggies in unison. On the other side of the kitchen, a cook pulls eggs out of the steamer and places them in the sink. As he begins peeling, he places the eggs in a massive calibrated square container. Within minutes the eggs reach the four-quarts line. In total, over 360 eggs are cooked for salad and sandwiches.

By 9 p.m. the sandwiches are prepared, the hummus and veggies, the yogourt parfaits and the freshly chopped fruit cups are packaged and ready to be on the shelves for students in the morning.

By 6:30 a.m. the loading dock at the Chestnut Residence is packed with pallets of food coming in and boxes of snacks and sandwiches going out. Edward Lo, executive chef for the Chestnut Residence, navigates around boxes, stopping in front of a bushel of green beans. “What’s with the green beans?” asks Lo. He had wanted French beans, “a more premium product.”

Two men are loading black boxes of grab-and-go snacks into a University of Toronto van. The boxes have their destinations labelled on the side, which face outward, so that Carlos, the delivery driver, can quickly make his rounds. The driver starts shortly after 6:30 a.m., and will make nearly 40 trips across the campus throughout the day.

Premium product? Fresh food? Daily delivery? What’s going on? Where are the prepackaged heat-and-serve foodstuffs, the bane of student diets since time immemorial?

“It’s giant,” says Joshna Maharaj of the shift to locally sourced whole food. Maharaj is a former executive chef for Ryerson University, who now consults for universities, hospitals and colleges. “It’s a really, really, huge task.” She should know. Maharaj took over the kitchen at Ryerson in 2013 after it discontinued working with Aramark, producing nearly 3,500 meals a day, in which at least 25 per cent of the ingredients came from southern Ontario. “Up until very recently, institution or campus food has been an irritating necessity, and it’s just easier to outsource it,” she says. “It’s very compelling to just hand this to somebody and let them sort of take over the control of it all.”

As Lokker walks into the kitchens at Robarts Library, he sees one chef making a massive shawarma skewer of chicken meat. “Is this the second one today?” He asks her. She nods. In just one week they will go through 700 to 800 lb. of chicken for shawarmas.

Overall, at St. George’s, it’s estimated that about 8,000 meals are served every day in retail locations and 6,000 more at the residences. While Lokker sourced local food for the Chestnut Residence before the expansion, the orders were never on this scale.

U of T has even joined a buying partnership for fresh food with other schools through the Canadian College and University Food Service Association. They band together to make bulk purchases at a lower cost in order to compete with larger competitors like Sodexo, Chartwells and Aramark.

He developed partnerships with local food producers like Harmony Organic and Silverstein’s Bakery, which abruptly shut down the same week that Lokker officially started running services across campus. Lokker quickly had to find a new source of bread. Tre Mari Bakery answered the call. Tre Mari now custom-makes a 2½-lb. loaf of rye bread in mass amounts for the deli on campus. “I can buy rye bread from GFS [Gordon Food Service] or Sysco, but it’s not the same,” says Lokker.

The bakery isn’t the the only local producer customizing products for the university. Lokker has teamed up with a butcher at St. Lawrence Market to produce a lamb sausage for the Middle Eastern stand, called Za’atar. “I try to eliminate the middle man as much as possible,” he says. “It’s keeping our dollar close to home.”

And then there’s milk.

Lawrence Andres walks through his pristine dairy barn in Kincardine, Ont. The rubber mats are clean and the straw is fresh. There is something different about this barn, however, especially for an operation with 250 cows. There are no stalls and there is a cow massager on the wall. “We don’t believe in high production,” says Andres. “We are looking for an optimal amount of milk.”

Andres is the owner of Harmony Organic, a co-operative organic dairy company that keeps both human health and animal welfare in mind. He is one of the farmers who connected with Lokker years ago. 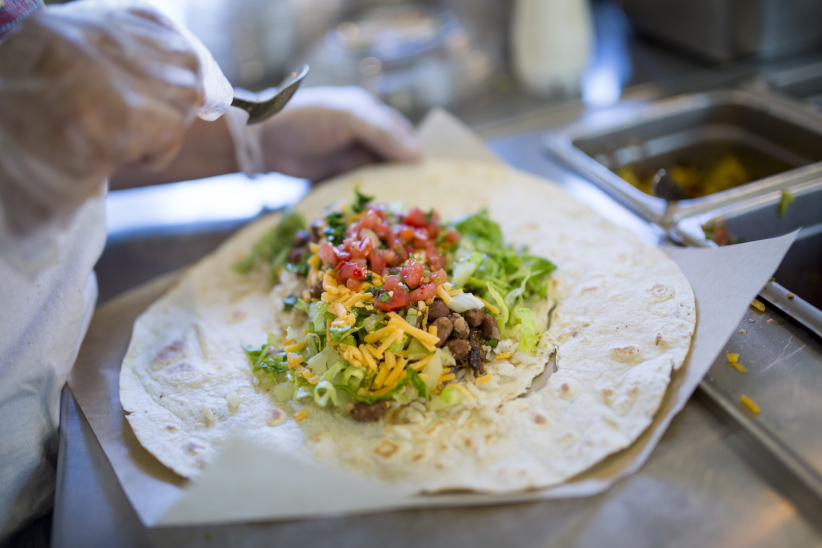 A burrito being made at University of Toronto’s new St. George campus cafeteria. (Photograph by Nick Iwanyshyn)

“Jaco Lokker is a visionary,” says Andres. “It’s a very bold move in such a large organization” to move to locally sourced fresh food.

On average, Andres supplies the Chestnut Residence with milk, chocolate milk and cream. He says the demand for organic milk in Ontario is three times what farmers are currently making.

Last February, Anthony Salerno sat in the New College cafeteria staring down at half a hot dog, cut lengthwise inside a bun. After weeks of starchy, carb-heavy meals, he couldn’t bear to eat the main entrée at dinner. It was one month after the university had made the announcement about Aramark, and Salerno knew something was going on in the kitchen. “It was already starting on a decline, but once they lost the contract, it just hit the floor,” says Salerno, a medical biophysics student and don for the residence.

Now, he and his friend Natalie Galant, another don at the residence, make a beeline to the fresh fruit at breakfast. As they scoop freshly cut melon, pineapple and cantaloupe into their bowls, they marvel at how different things are.

“In previous years, they never had fresh fruit like this,” says Galant. At one point, Galant says staff were cutting bananas in half in order to make them stretch, like the hot dogs. As dons, Galant and Salerno listen to students’ concerns. Last year, they were inundated with complaints from residents about the food.

Returning students see a distinct difference as they say hello to chefs Lokker and Piggot, who are often seen in the kitchens.

“I miss the English muffins,” says one woman to Lokker. “Don’t worry,” he says, assuring her that her concerns have been heard.