Classes could be cancelled by March 9 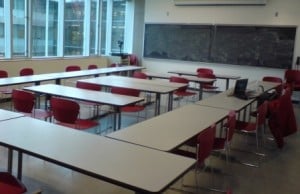 University of Winnipeg professors could be on strike as early as next Wednesday, after voting overwhelmingly to set a strike deadline yesterday.

“There was huge turnout and 90 per cent voted in favour of authorizing strike action,”  University of Winnipeg Faculty Association president Kristine Hansen said in an interview, though she added that UWFA bargaining protocol prevented her from commenting on the issues surrounding the settlement. “I can’t guarantee anything or saying anything further than we’ve set a strike deadline. We’ve gone back to the table and bargaining is in process.”

Faculty members previously rejected an offer from the university that included wage freezes for the first two years of a four year contract, and increased pension contributions from senior faculty. The 350 members of the faculty association have been without a contract since March 2010.

“We’re doing our best and are committed to continuing to bargain with the UWFA main unit for as long as it takes to get to a settlement that’s agreeable for both sides that’s also fiscally responsible,” said U of W associate vice-president (external affairs) Dan Hurley.

UPDATE: Labour negotiations come to a halt a UWinnipeg

The union held an information session for students today, and has another scheduled for Friday, March 4, to answer questions from concerned students.

Faculty members at the session explained to students that in the event of a strike, faculty members can’t perform services they were paid to perform, such as grading assignments, but UWFA won’t police individual contact between professors and students. It was also pointed out that students were welcome to talk to their individual instructors about settlement issues, as they would not be speaking on behalf of UWFA but as a faculty members of the university.

James Moore, a fourth year theatre and film major at the U of W who attended the presentation, said that he felt frustrated with the lack of communication from the university. “It’s frustrating trying to hear a two-sided argument, when you’re only getting one side,” said Moore.

Hurley said that the university is working as quickly as possible to get information out to students about the contract negotiations. “Things have moved quicker than I think we had expected [ … ],” he noted.

“We will have a better picture next week to see if we will have a strike or not, and we’ll have more information for students. The bottom line is we’re working to ensure that students are not impacted in any way or a very minimal way by any labour action.”

The university is now posting updates on it’s website on the contract negotiations with UWFA.