A food critic takes on U of T's new fresh, local food program 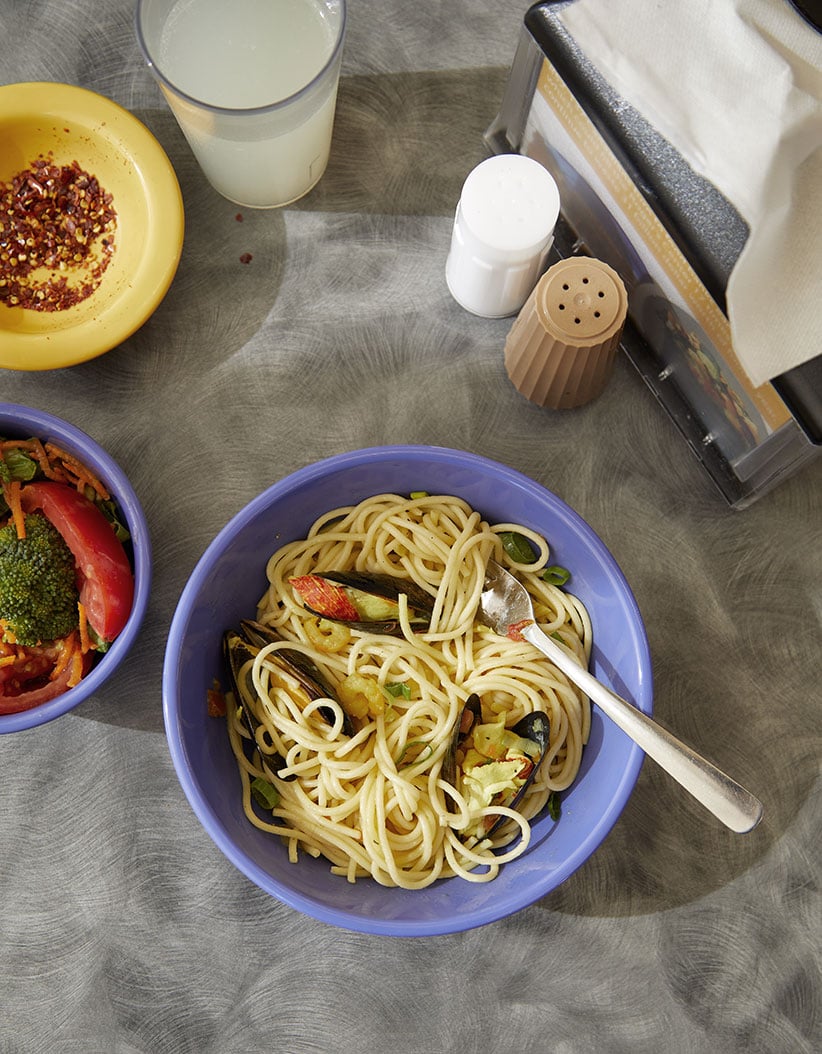 Something’s missing at the University of Toronto.

Amid the constant motion of students, thousands at a time rushing between buildings, it takes a while to realize that the missing something is franchise junk food.

There’s no Pizza Pizza, no KFC, not even one Subway sandwich shop. Except for Tim Hortons, Second Cup and Starbucks (we are required, by federal law, to have at least one of these coffee shops per square kilometre) there are no corporate food providers anywhere on campus.

Until last year, the food was the domain of Aramark, the kind of global food service company that offers complete meal solutions to schools, hospitals, prisons and sports stadiums. Starting this year, all the food at the U of T downtown campus is produced in-house.

It’s hard to overstate the significance of this. But if you’ve ever moved from your hometown to a big city, while at the same time having to learn new skills and make new friends, you can relate to the level of a complete life makeover.

Okay. So A for effort. But how does it taste?

Inside the Sid Smith Hall food court, between Gourmet Burger House, Tortillas and Sambal, it’s crowded and steamy, and the tightly packed space creates general confusion between the ordering and pickup lines.

The majority of students are digging in to burgers. These are not frozen, lifeless patties, but fresh (and halal) beef smashed and fried to a crisp on the flat top.

My Mongolian spicy pasta bolognese from Sambal is about as spicy as toothpaste. And the promised “non-traditional spices” must be pepper with a hint of salt. But the meat is braised to succulence. And there’s lots of it.

Though it’s nice to see Indonesia represented on the pan-Asian menu, the “nasi gori” has none of the shrimp-paste funk or tamarind tartness of the fried rice dish nasi goreng. With the fast-service shortcut of packing it into balls to be deep-fried, it could convincingly be sold as Italian arancini.

Muting these flavours to timidity shouldn’t happen two blocks from Chinatown. U of T students can handle some chilies and fish sauce.

In another food court, at Robarts Library, cooks at Pasta Pappardelle prepare individual bowls of noodles to order, while Za’atar cooks slice moist chicken from a rotisserie. The chicken is well-seasoned, and an accompanying tabbouleh salad and grilled vegetables are light and vibrant. Only the falafel, with its pasty centre, disappoints.

You can see the staff straining at the demands of the new menus. That’s a good thing. Staff are being challenged to do better and they’re working harder to meet that challenge.

“In institutions, the folks who work in kitchens have been there for 10, 20, 30 years,” says Joshna Maharaj, a chef who has overhauled the food at Scarborough General Hospital and, most recently, Ryerson University. “They have seen all these ideas come and go. So they’re inherently suspicious and wary.”

Given that, it’s outstanding to see how much hustle the staff has, how sincerely they’re rising to the occasion. No longer required to just reheat and scoop, their effort and care pays off. This is real food, not reheated, anemic and grey. It tastes better and it’s better for us.

Down the street, the gargantuan cafeteria at the New College residence is humming. Students hop between their tables and the cafeteria stations—noodle soups, salads, burritos, pizza, breakfast cereals and drinks—leaving phones and backpacks unguarded. When finished, they dutifully scrape their plates into a bin for food waste.

Asking a cook what’s in the seafood roll, I love that he tells me it’s surimi (paste made from fish)—instead of pretending it’s crab—with shrimp, dill and mayo. Packed into a fluffy bun with lettuce, it only needs a little hot sauce to get up on its feet.

And there is plenty of Sriracha, rice vinegar, soy sauce, chili flakes and hoisin sauce available, necessary for the watery broth of “pho noodles.” Most of the kids in the room have already figured out how to use the sauces, plus vegetables from the salad bar, to customize their soup.

It’s nice to see pizza made with a whole-wheat crust. The effort, however, is undone by a ketchup-sweet tomato sauce.

Tilapia is bank-vault thick with breading. But it’s baked, not fried. And the pico de gallo served alongside is made of fresh tomatoes, onions and cilantro that were clearly chopped by human hands this morning.

The french fries are crisp and golden. And as popular as they are, at least half of the kids in the room are eating fresh vegetables, filling plates from the salad bar or adding scoops of steamed cauliflower and green beans, or eating bowls of Vegan Power House, a mix of quinoa, bell peppers, carrots and zucchini.

Next to me, a second-year student nibbles on fish and cauliflower while transcribing notes. Asked if he tastes any difference in the food between this year and last, he says it’s noticeably better (except for the pizza).

Even the menu items that stayed, like hamburgers and hot dogs, are of improved quality and less processed. His only complaint is that they no longer serve ice cream.