Why banning fraternities isn't the answer 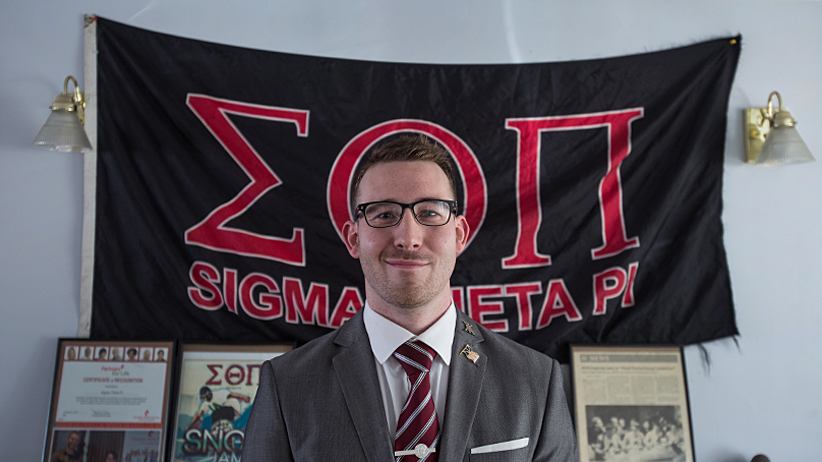 ‘We are not exclusionary at all’: Nick Kelly, co-president of Sigma Theta Pi at Memorial University. Photograph by Andrew Tolson

Last month, a couple of male orientation leaders from Ottawa’s Carleton University caused a ruckus after they were photographed on their way to a party in shirts that said “F–k Safe Space.”

It’s still not exactly clear what the message was.

Some saw it as an attack on the LGBT students who are protected by “safe space” programs, in which participants are trained on how to include everyone and are given little rainbow stickers they can use to show their support.

Others suggested it was normalizing “rape culture,” or, at least, belittling the fight against sexual assault.

Others still surmised that they were were worn to protest orientation training that outlawed swearing in “safe spaces.” If true, then you might call it a clumsy attempt to defend free speech.

Whatever the explanation, the shirts were obnoxious and the students, rightly, apologized.

During the frenzy of outrage on Twitter, where people debated the meaning of the shirts using a #f–ksafespace hashtag, the conversation turned to whether universities ought to ban fraternities altogether. After all, a columnist for the Guardian says it’s justified in light of “studies that have found that men who join fraternities are more likely to rape.”

It’s not even clear the young men photographed were fraternity brothers, but they looked the part in neon-emblazoned muscle shirts and backward snap-back hats, so they became the natural scapegoat.

A self-identified feminist, @universityfem, responded to the Twitter storm that banning frats won’t solve much.

Someone ought to tell that to the zealots at Memorial University of Newfoundland. Last month, when Memorial’s chapter of the Sigma Theta Pi was holding an information session for potential recruits in the University Centre cafeteria, campus security officers showed up with an unidentified woman who demanded they leave.

Nick Kelly, a co-president of Sigma Theta Pi, says the officers interrogated him and took notes, but left after he agreed to put away their marketing material: posters promoting their parties, a photo of brothers donating blood and a newspaper clipping about their success at a poutine-eating contest. (They were allowed to keep the coffee and Timbits they were handing out.)

The run-in with security wasn’t exactly surprising. The student union that runs the university centre decided in 2012 that it wouldn’t allow fraternities or sororities to access student space, because such groups aren’t “gender-inclusive,” and it concluded that that violates its anti-discrimination policy. Although the student union says it wasn’t behind this particular request to remove the fraternity, its policy could still be the reason the mysterious tattle-tale felt justified.

One of the groups that supported the anti-frat stance was LGBT-MUN, a campus resource centre, which argued fraternities are sexist, in part, because they wouldn’t accept transgendered people. (An LGBT-MUN representative agreed to an interview on Thursday, but couldn’t be reached at the number provided.)

Kelly says that isn’t the case. “If we had any applicants who are gay, trans or anything like that, we would certainly rush them,” he says. “We are not exclusionary at all.” Women are welcome to try out for the local sorority, which, in fact, has at least two LGBT students “rushing” this fall, he says.

He adds that it’s also unfair to make fraternities the scapegoats for sexual assault.

“I know there have been problems in the past, especially in the U.S., but the overarching stereotype that all [fraternities] promote rape culture is incorrect,” he says. “Any time that’s happening, you look at the leadership. Any fraternity with decent leadership is not about rape culture.”

Here’s what makes the idea of banning fraternities so backward. Some probably are still homophobic and not serious enough about sexual assault prevention. But if you won’t even allow them to gather in the student union building, how will you ever convince them to change? And why punish all fraternities when some are clearly progressive?

That’s the point @universityfem was trying to make.

It turns out @universityfem is a sociology student at Queen’s University (who prefers not to share her real name). It’s better to try and change the misinformed minds than to banish them, and there are plenty of role models, she says. “If you look at frats in Canada, some of them are creating positive change. Frats can be the change.”

One example: Earlier this year, a group of fraternities and sororities at Western University produced a video with Get Real, a non-profit that speaks to high school students about “unlearning homophobia and embracing everyone.” It shows gay and lesbian sorority sisters and fraternity bothers talking about being accepted, plus straight members promising that they won’t discriminate against LGBT recruits.

In other words, at Memorial and Western, at least, it’s okay to be gay in a fraternity, as long as you enjoy partying and poutine-eating contests.

That type of progress should be recognized.