An insider's guide to the best live music venue, place to study and more 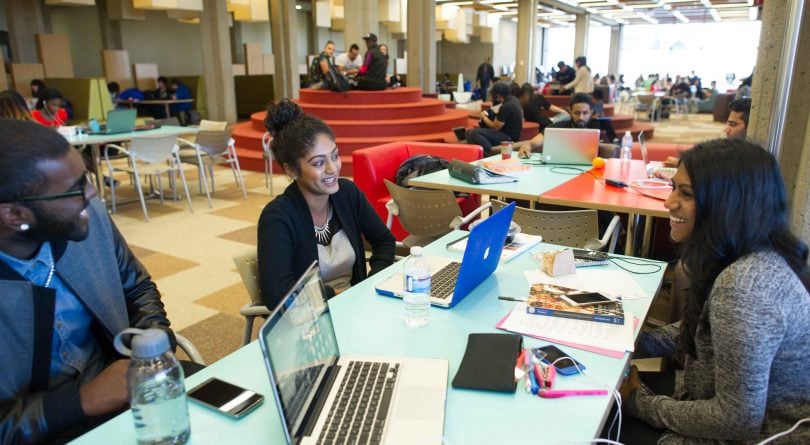 Best place for a nap:
If you’re desperate, you might be able to nab a couch in the new Student Centre
Best cheap lunch:
The Islands, a Caribbean restaurant, offers a daily lunch special for $6.64
Best hangover breakfast:
If you happen to find yourself hungover on a weekday—who hasn’t been there?—Berries and Blooms’ $5.50 breakfast special can’t be beat
Best bar for hanging out:
Shopsy’s. There are plenty of food options, including all-day breakfast, as well as daily drink specials.
Best place to study:
The Winters and Stong cafeterias are often quiet, and it’s usually not difficult to find a table
Best food on campus:
Z-Teca serves burritos, tacos, quesadillas and other Tex-Mex favourites
Best campus event:
YorkFest
Best giveaway:
During frosh week, the Federation of Students often hands out food to students in Vari Hall
Best live music venue:
The Aviva Centre
Weirdest tradition:
Getting attacked by a goose (they get really aggressive in late spring after mating season)
Best place to live:
Calumet Residence. Rather than the traditional style of dorm that has a bed and desk all in one small room, Calumet offers a suite that residents share with five other people.
Unofficial school motto:
“Getting Yorked”
What surprised me most about the school:
How far out of the way it is from the rest of the city

York: great professors; terrible administration. Dealing with the university administration is like pulling teeth, but the professors here are great, and they make it worth the inevitability of “getting Yorked.”

Situated on the border of Toronto and Vaughan, York is in the middle of nowhere, so commuting can be a hassle. This has been compounded this year because buses no longer come to campus. Since the extension of the Toronto subway line to campus, both VIVA (York Region transit) and GO Transit have ceased serving it.

Many students who don’t want to commute live in “the Village,” a nearby neighbourhood. It makes getting to school easier for students (pretty much every house is within walking distance of campus), but the landlords are often very sketchy. Students will frequently see leases that include illegal clauses such as “no pets” or “no overnight guests.” There are also many houses attempting to rent rooms that don’t meet city requirements (such as basement rooms without a window).

York is a huge university, with more than 47,000 undergraduate students alone, and there are always lots of protests and rallies being held. For those interested in politics and activism, York is a hotbed of activity. With more than 300 accredited groups and clubs on campus, there’s something for everyone.

After Class
The York Federation of Students often organizes trips to places around the city at discounted prices. There’s usually a Blue Jays night, a Raptors night, a Medieval Times trip, and many others. The music department stages live performances throughout the year, including their Jazz @ Midday events, which feature performances by faculty members.

The gym offers tons of intramural activities, including popular sports like basketball and hockey, and more obscure ones such as Jorkyball and inner-tube water polo. All are free to enjoy.

Local Vibe
Toronto is a great city if you enjoy a fast-paced lifestyle. There’s so much to see and do that it can sometimes be overwhelming. I’m originally from Ottawa, which isn’t such a small town, but it was still an adjustment when I first moved here. It’s a great city—there are so many great cultural events to experience and there’s a team for any type of sports fan. There are also so many great restaurants featuring authentic cuisines from all over the world, as well as great neighbourhoods to visit like Kensington Market, the Distillery District and the Beaches. Many festivals also take place, including Pride, the Toronto Light Festival, Nuit Blanche and Caribana to name a few.

If you decide to come to York, be prepared to fall in love with Toronto.

More Info
BlogTO always has the best lists of places to go, events to attend and activities to partake in.