Miss a class? With lecture-capture technologies, students can catch up on their own time 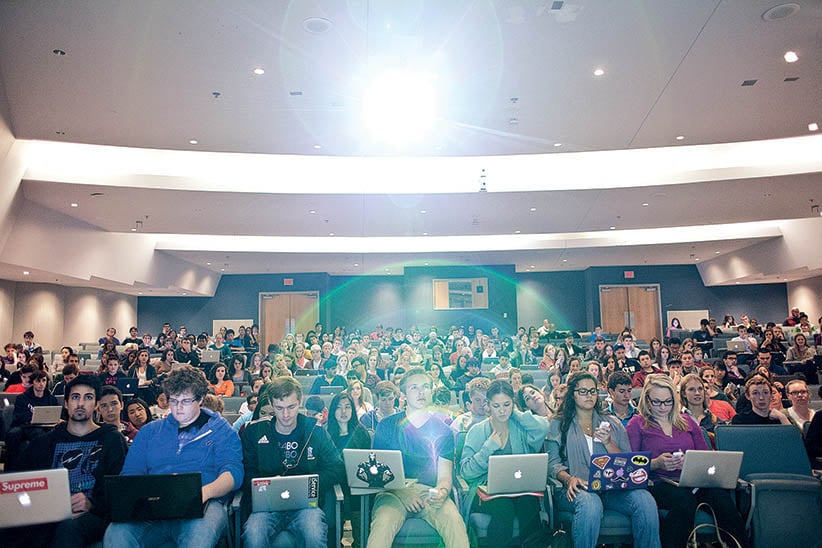 With its oak-trimmed chalkboards, white domed ceiling and two levels of theatre-style seats, Room 309 at Columbia University’s Havemeyer Hall is no stranger to film crews, having served as a familiar backdrop to dozens of pedantic, tweed-jacketed professors in Hollywood movies and TV shows. But it’s far from the only lecture hall regularly outfitted with cameras and microphones these days.

Across North America, real-life university profs and instructors are recording carefully crafted presentations with so-called lecture-capture technologies, allowing students to watch—and re-watch—them later. Miss a class? Catch up on your own time. Fuzzy on a concept? Rewind and replay until you’ve got it cold.

Students, not surprisingly, see videotaped lectures as a godsend, particularly come exam time. Critics, by contrast, worry about an avalanche of skipped classes and poor note-taking—even the demise of the formal lecture altogether. Which may be precisely the point.

Nancy Acemian, a senior lecturer in the faculty of computer science and engineering at Montreal’s Concordia University, began videotaping her lectures about seven years ago. She’s now overseeing a pilot program that uses a video-capture system called Panopto in 15 classrooms. “The students absolutely love it,” she says. Another bonus: Professors can see which video segments are watched most and tweak their lessons accordingly.

The rise of lecture capture hasn’t been without controversy, of course. Some profs worry students won’t attend lectures if they can watch them (or not) from their dorm rooms. However, a recent study by Northern Ireland’s Queen’s University Belfast found the introduction of lecture capture had almost zero effect on attendance. Instead, students used the videos mostly as a study aid, with some 96 per cent of those surveyed citing exam preparation as a motivation.

Less clear is whether making videotaped lectures available to students results in better grades for all students. A 2011 study by Toronto’s York University found students who watched lectures more than once per month performed worse than their peers, suggesting lower-achieving students turned to the videos to bolster their studies. Meanwhile, the best students tended not to watch recorded lectures. (One in 10 didn’t bother going to class, either.) The study’s authors concluded lecture capture is thus mainly useful as a remedial tool.

Acemian, who is Concordia’s provost’s fellow for digital and blended learning, holds a different view. She says videotaping lectures for replay is merely a stepping stone to more innovative uses. She’s trying to move the school away from the “sage on a stage” model of academic instruction, as the smartphone generation’s attention span shrinks at nearly the same rate as circuits on a microchip.

Instead, Acemian encourages faculty to incorporate brief video highlights into “blended” courses with a significant online component, or use them in “flipped” classrooms, where students are asked to watch a brief lecture video before coming to class to engage with the issue in more depth. “Memorizing is not as important to me as knowing how to use something,” she says. “This idea that you walk in and the prof talks while you take notes for an hour and 15 minutes, that doesn’t work anymore.”

Tony Bates couldn’t agree more. A former director of distance education and technology at UBC, the private consultant and e-learning evangelist compares lecture capture to the early days of Hollywood, when producers recreated musicals and stage shows on a screen. “Like a lot of technology, it gets used in old-fashioned ways first,” he says. “People don’t always understand the new medium.”

Bates hopes the current buzz about lecture capture—there are more than a dozen companies offering systems to post-secondary institutions—will get more technology into the classroom, and more professors using video and other online tools in their lessons. “The issue isn’t whether we should be capturing lectures, but whether we should be teaching in a way that uses more interactive learning,” Bates argues.

He points to the flipped classroom as a first step. The next challenge, he says, is to have students spend more time away from the classroom, gathering information and synthesizing it, before discussing it with their professor and peers. The end of campus life? Not quite. “There are still a lot of reasons for students to come to campus,” Bates says, “but lectures aren’t one of them.”

As for fans of the bespectacled prof droning away on the dais, they needn’t worry: They can always catch one on the big screen.