It's not a straight line from shop class to college anymore. 44% of Ontario students already have post-secondary education when they enroll.

If you imagine the typical college student as someone who just left a Canadian high school, you are increasingly wrong. “There’s no sort of linear path, and a lot of the assumptions about who chooses what type of training are being thrown out the window,” says Christine Trauttmansdorff, vice-president of government relations and Canadian partnerships at Colleges and Institutes Canada.

“They come in not just with one degree, they come in with two or three, just looking for that extra piece that will make them employable,” says Nancy Johansen, program coordinator of the marketing research and business intelligence program at Algonquin College in Ottawa.

In British Columbia, one of the biggest trends is a boost in post-graduate certificate offerings, catering specifically to those who already have a degree. “Students are wanting to change fields of study or upgrade skills in a particular area,” says Ian Humphreys, Langara College’s vice-president of strategic planning and business development. Continuing education is on the rise, but the average age of someone entering a continuing education class has dropped, from the mid-40s a decade ago to about 32, according to Humphreys.

“The fact that we’re now seeing students coming back to post-secondary fairly early in their careers indicates that skills upgrading is very much top of mind for them, more so than it ever has been historically.” 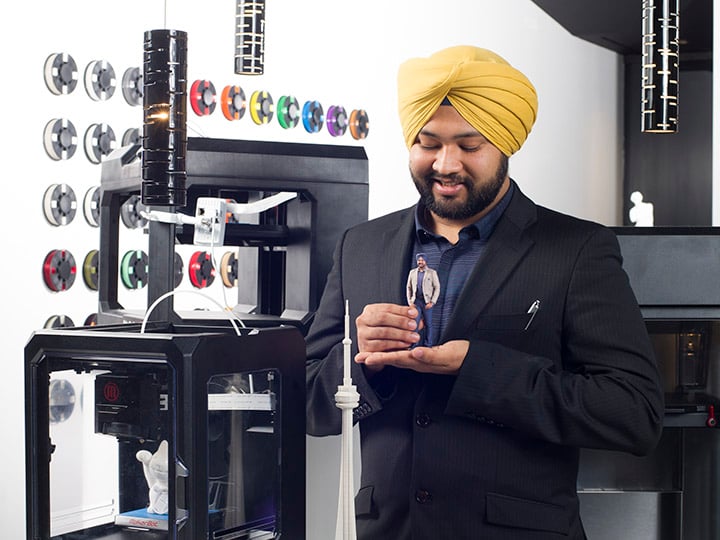 Sheridan College mechanical engineering technology graduate Hargurdeep Singh with a 3D model at the The Printing House  in Toronto.  (Photograph by Cole Garside)

It was too much theory and not enough experience, so he decided to pursue a different curriculum. The 26-year-old ended up at Sheridan College’s three-year mechanical engineering design and drafting technology program in 2012—and loved it.

“I really like the physics of speed and working with design, and just looking at how everything fits in to make different applications function,” he said. “I was able to utilize my interest at Sheridan in that discipline, and at the same time gain industrial and real life application skills.”

Only a month after starting the program, Singh met with the associate dean to discuss the engineering culture he thought the college lacked. Four weeks later he founded the Sheridan Engineering Association, which swelled to more than 200 students in one semester. Under Singh’s reign, Sheridan became the first Canadian college to become partners with the American Society of Mechanical Engineers (ASME), one of the largest global organizations for engineers.

Singh’s first competition was the IAM3D challenge in 2014, which is put on by ASME for engineering students to create products that minimize energy consumption. He partnered with two University of Toronto students to design a wind turbine blade using 3D printing technology. They won first place internationally.

In 2015 he entered the competition again and designed an exoskeleton for a Toronto man who suffered nerve damage after a machine fell on him 20 years ago, leaving him unable to open or close his hand. Using 3D scanners, his team printed a model of the man’s hand, winning a runner-up prize for their design and presenting it at a Boston conference earlier this year.

Aside from creating life-changing devices and winning international awards, Singh was also involved in research at the school. “I did miss a little bit of what was happening in university,” he said. “You’re never satisfied once you get a taste of that, so I started doing research on 3D printing.”

Now Singh works for a company called the Printing House in downtown Toronto as a 3D business development specialist, a job that he interviewed for two months before graduation.

“I graduated on Friday,” he laughs, “and on Monday I was at work.” 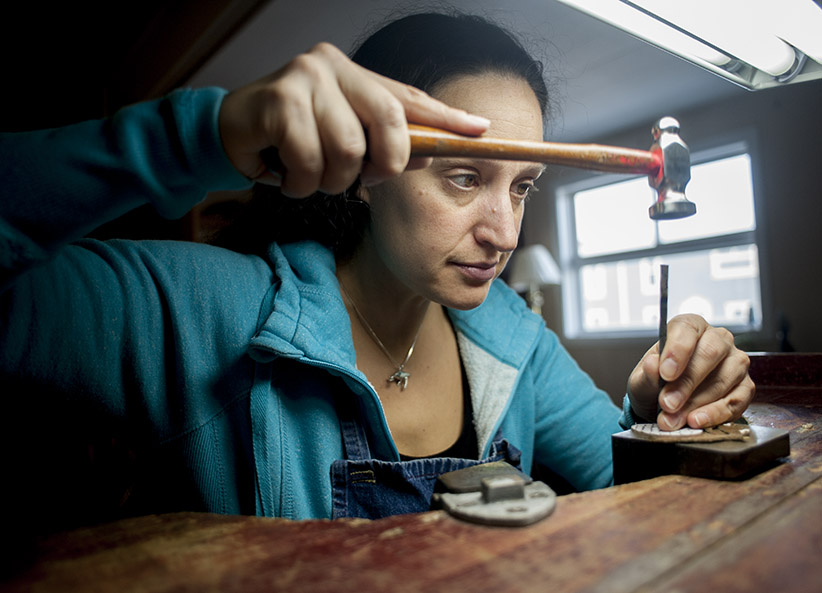 Remona Barkhouse working at her desk in her house making jewellery. (Photograph by Kieran Oudshoorn)

Ramona Barkhouse had already decided she wanted a future in jewellery and metalwork before she applied to Nunavut Arctic College. The 39-year-old was living in Bridgewater, N.S., when she applied online to be a supervisor at a convenience store in Iqaluit. “I found there were things in my life that needed to be fixed, and the main reason I moved up here in the first place was to pay off bills.”

Barkhouse worked for a year before applying to the college’s two-year jewellery and metalwork program, three days before the deadline. “I knew they had a program in town. I didn’t know how I’d do it but I knew it was there and I was really excited.”

She started the program in 2013 and graduated in May. Her grad project was a neckpiece called “Flight of the Peacock,” based on peacock feathers and made up of sterling silver, 14-karat gold and Labradorite stone. It was chosen as a winner representing Nunavut in the 2015 BMO 1st Art! Competition.

When setting one of the stones, it cracked, and instead of replacing it she chose to keep it the way it was. “I’ve been cracked in different places and broken, but I’m still beautiful, so I kept it.” To her, the necklace had become an allegory for her life.

Barkhouse is setting up a website to sell her art and eventually wants her own studio. She advertises by wearing her pieces while travelling and frequently gets requests for custom items.

“This is going to be my career, I absolutely love it,” she said. “I want this to be my life.” 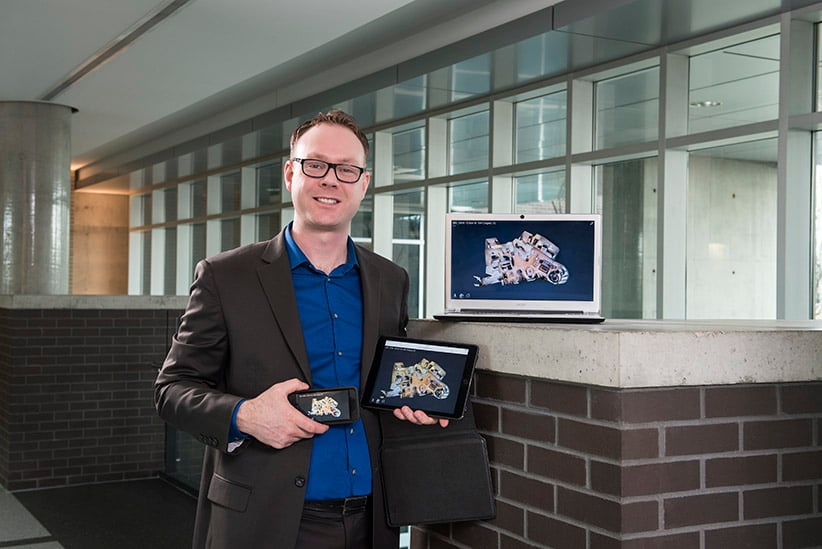 Jesse Tutt started a successful business out of his final-year project for NAIT. (John Book)

Jesse Tutt was checking out different technology blogs looking for ideas for his final-year project at the Northern Alberta Institute of Technology (NAIT).

“I’m an IT guy, so I came across this real estate technology that allows people to virtually see listings or properties. I ended up investing and built a business plan and developed the business idea as part of my capstone project,” says the 36-year-old.

His school project, now a business, is called 3D Scan Experts, and it’s the first to bring this technology to Alberta. The main principle is that photographs don’t provide people with enough information; they need to understand what properties are really like.

“It’s challenging to distinguish your property in a slew of others, so we create virtual tours that include a floor plan and high definition photos. Then we package all that into one page and market it on social media,” he explains.

Tutt graduated from NAIT’s bachelor of technology in technology management program in April after studying part-time for five years. “I was working during the days and taking the program [online] in the evenings and mornings.”

He still has a day job: IT in the health care sector doing strategic planning and financial management, and lives in Red Deer with his wife Micaela, who is a teacher and co-owner of the business.

Over the last year, they’ve expanded, hiring three photographers in Edmonton, a salesperson, and another photographer in Red Deer. Tutt does the accounting and online marketing. Currently they offer services in Calgary but are hoping to expand and have local support all across Alberta and move into Saskatchewan or British Columbia.

Tutt decided to go back to college to pursue two goals: getting a senior leadership role in the IT sector and owning his own business. “At the end of the day education is pretty important to me.” 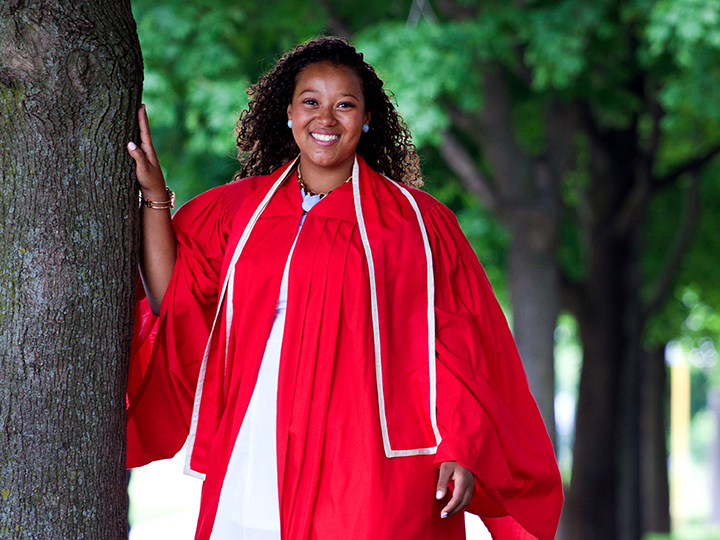 Even in high school in London, Ont., Cheriss Marson was forward-thinking. “I would never take a course just to take it. I would always say ‘Am I going to use this? Do I want this? Is this something I’m interested in?’ I kind of let my path form out of that.”

That path led the 21-year-old to Fanshawe College in 2012—straight out of high school. “Ever since I was probably in Grade 8 or 9, I knew the industry I wanted to go into. I knew it was very relationship-based and hands on.” So she studied recreation and leisure for her first two years, then took a one-year post-graduate project management course.

Throughout her three years at Fanshawe she carried a part-time job, played on the soccer team, was vice-president of the student union and had a full course load. “It was really heavy to balance, but I find it easier when I have more stuff on my plate. I have to schedule every little thing so I don’t waste much time.”

She joined Fanshawe’s soccer team as goalie in her first year, and they took silver at provincials. On top of that she won rookie of the year and was a starting player during her whole stint at the college.

But arguably her biggest highlight was winning a major national leadership award, the Colleges and Institutes Canada 2015 award for student leadership excellence, a win that she found out on April 1. “I thought it was an April Fool’s joke,” she laughed.

Now, Marson works as the assistant food and beverage manager at a golf course in Dorchester, Ont., and has some hefty goals.

“I’m looking to specialize more on weddings, corporate functions and maybe start my own business in five to 10 years. I think within the next couple of years I’m just looking to build more relationships in the industry.” 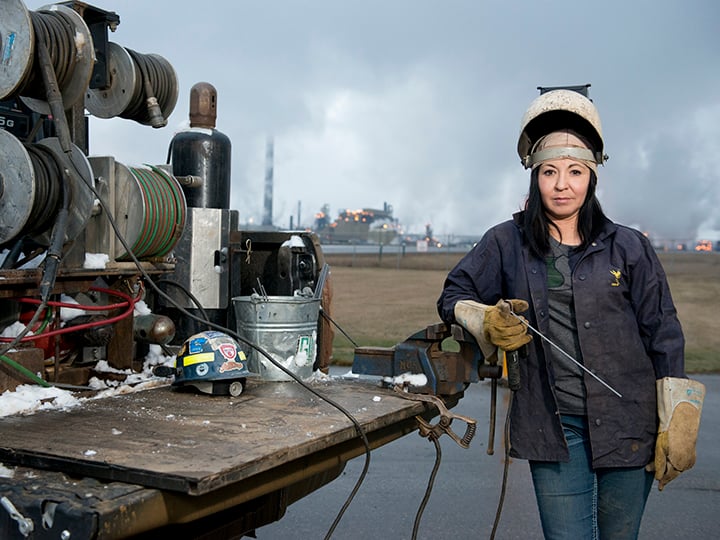 Shannon Burns was the first female to get her Red Seal certification in welding at SIIT. (Photograph by Greg Halinda)

Shannon Burns, 40, was one of two women in a class of 13 when she completed her welding applied certificate at the Saskatchewan Indian Institute of Technologies (SIIT) in 2010, and was the school’s first female to receive her Red Seal certification.

“The program gave you your first year for a welding apprenticeship and 600 shop hours,” she said. “It kind of kicked you up well into the trade.”

In 2006, before applying to SIIT, she worked on pipeline jobs in the oil fields and found herself around a lot of welders. She was always attracted to the trade, a craft that never ceased to amaze her. When a block of time opened up after she was laid off in 2010, she took a step to pursue her dream. “I got into the welding program and it went from there.”

Burns currently works in Fort McMurray as a rig welder, owns her own truck and equipment, and makes good money doing it.

“Welding isn’t an easy trade by any means. It takes burning rod after rod after rod to get where you’re good enough to certify for whatever process you want to get into.”

The welding profession is undoubtedly male-dominated, but Burns says it doesn’t faze her. “I kind of don’t consider myself a minority, in terms of so few women welders. I’m just one of the people there on the crew doing a job.”

Such a physically demanding trade does come with its challenges. “I’m not as strong as a lot of the guys and I have to ask for help sometimes, but generally the guys are really good to work with.” She says the way things are now, people in the industry are very supportive and helpful.

“I make an exceptionally good wage, I’m doing all the things that I want to do, and going into my trade has made it possible.”