Most university students have packed up and gone home to their families to finish the semester online. But some continue to live on very quiet campuses. 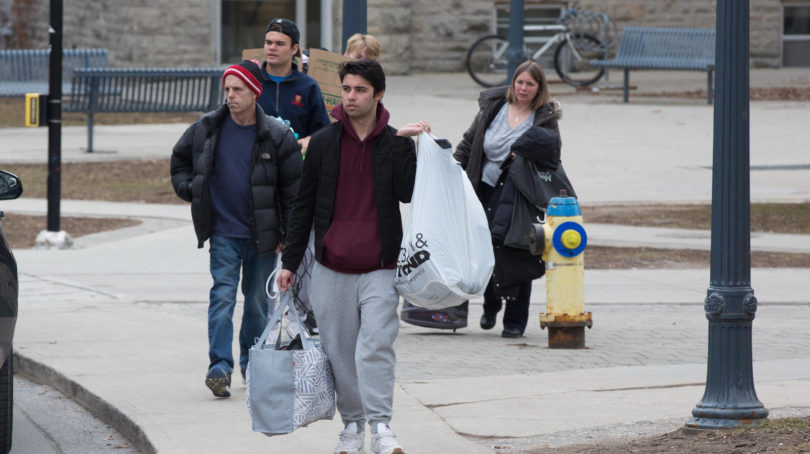 As fellow students packed up their dorm rooms in a flurry of duffle bags and laundry baskets last week, Nicole Momtahan wasn’t sure if she would have anywhere to sleep that night. The 19-year-old Dalhousie University student says the original move-out date of March 22 was pushed up to March 20, and students were given just 24 hours notice.

“I was just really stressed. My parents are both over 60 years old, so I was terrified. They wanted to come down and help me move, and my dad had just gotten back from travelling internationally, so I was worried about him bringing something to Nova Scotia,” says Momtahan, whose family lives in Ontario. She was also worried about her parents contracting the disease because “we had just gotten an email saying there was a case of COVID-19 at Dalhousie.”

In the end, Momtahan opted to stay in Nova Scotia. She spent days writing emails, making phone calls, and trying to visit the residence office in person to ask for a special exemption to continue living in her 700-person residence building, which now only houses about a dozen students.

RELATED: How Canadian universities are evaluating students during the coronavirus pandemic

Eventually, Momtahan got permission for her and her therapy dog to stay in the dorms. The campus is nearly shut down. Libraries, computer labs, and athletic facilities are all closed. Only a small number of staff are let into office buildings which are controlled by electronic key cards. Students can no longer eat in the dining hall; all food is packed up to go. While Momtahan says staff have been cheery and professional, she interacts with a fraction of the people she used to. All of her classes are now online. “Overnight, it went from being a college dorm—so lively, a lot of parties and people talking—to basically being a ghost town,” she says. Most days she goes from her room to the dining hall and back.

Anusha Raisinghani is dealing with the same eerie kind of life at the University of Waterloo. She’s one of about 900 students still living in student residence, the majority of them international students. Raisinghani is actively trying to get back home to her parents, but to no avail. The 18-year-old international student calls and emails the United Arab Emirates embassy daily to see if she might be given a spot on the rapidly decreasing number of flights out of Canada. She’s living out of a suitcase now, having packed up her room, ready to leave at a moment’s notice. For her, the uncertainty has been the worst part, though she now has school work and exams to distract her. “It was hard in the beginning, since [myself and the other international students] didn’t know what we were going to do or where we were going to go…. we’re still prepared to pack up and leave,” she says.

Raisinghani was originally planning to stay in Canada until the end of April, when her student visa expires. Paul Davidson, president of Universities Canada, says universities and colleges have been working to extend student visas to make things a little easier for international students. “This is an area where we’ve been working collectively. We really appreciate that these are unprecedented times and it’s even more challenging for folks that are a long way from home and may not have family and other supports close at hand.”

Davidson says schools across the country are dealing with the issue of how to take care of students who are still in dorms, but most campuses have provisions to keep residence halls open and running for the immediate future. Officials from Waterloo say they have postponed the spring intake for new residents on their campus, and that any student who needs to extend their stay past the term will be able to.

While many Canadian universities are keeping their dorms open for students like Momtahan and Raisinghani, many schools asked that students pack up and ship out, resulting in a mass exodus from residence halls across the country. Eighteen-year-old Cassandra Faber bundled her belongings together for the short trek from McMaster University to her parents’ home in Brantford, Ont. “I didn’t believe it at first because it was so sudden, and none of my friends actually thought that something like this would happen right away,” Faber says. “[There were] a whole bunch of kids my age on campus, we’re not around older adults, and we didn’t understand how serious of an issue the virus was until—at least for me— I came home and talked to my parents and my neighbours.” Now Faber is taking her kinesiology classes online, and prepared to do her spring semester virtually as well. She is hopeful “we’ll be able to return to in-person school in winter term at the latest.”

Momtahan is also looking to do her spring semester online. In the midst of the residence confusion, she found an apartment that would support her therapy dog. The viewing appointments she booked were cancelled, so Momtahan relied solely on pictures provided from leasing offices. Under pressure to secure a place, Momtahan “signed the lease for the first place that accepted me, instead of waiting to hear back from the other apartments I’d applied to to see what my options were.”

She put down the deposit before ever seeing the apartment in person. Now, she’ll have to wait until April 6 to get wifi installed. Her first exam is April 9. “Since all my school work and lectures and notes are now done online, I have to rely entirely on cellular data to keep up with my studies.”