Why are Canadian universities so slow to adopt digital learning?

Online courses are popular with students who juggle tough workloads. But only one in five institutions has a significant number of 'blended' options. 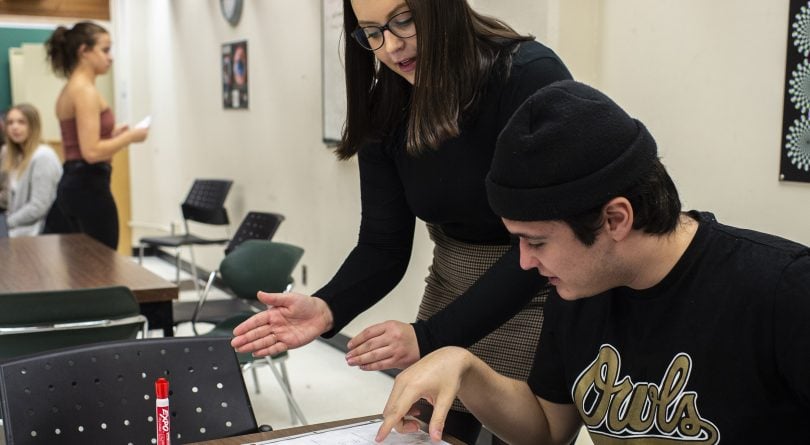 As a ﬁrst-year student at Queen’s University in 2015, Alison Carney enrolled in introductory psychology, expecting the popular course would be delivered by a professor at the front of a 400-plus seat lecture hall—just like so many others on campus. She got that, and much more.

Along with a weekly lecture and labs, the course included online modules with readings, explanatory slides and quizzes designed by a professor to deepen understanding of the material. “It really sets students up well to learn,” says Carney of the so-called blended or hybrid learning format.

Web-enhanced teaching, as illustrated by the Queen’s psychology class, is growing in popularity as a tool to enrich the undergraduate learning experience and create new degree options for working professionals.

But some experts say higher education institutions need to quicken the pace of digital innovation. “There is momentum, but not fast enough for the needs of either the workforce or society in general,” warns Tony Bates, a distinguished visiting professor at Ryerson University and a widely recognized authority on technology-enhanced education.

READ MORE: Advice on how to make online courses work for you

“We should be looking at digital and online learning as a way of developing 21st-century skills,” he argues, not just as a way to improve access for those unable to study on campus. “It is not just a technology issue. It is about getting people [ready for] a digital society.”

A new national survey, on which he served as a researcher, bears out his assessment. More than three-quarters of Canadian post-secondary institutions integrated online with classroom teaching in 2016-17, reported the Canadian Digital Learning Research Association (funded by provincial governments and the private sector) in January. But only one in ﬁve institutions has a signiﬁcant number of blended courses.

The survey also found Canada lags behind the United States, with 18 per cent of all post-secondary students here enrolled in at least one online for-credit course in 2016-17 compared to 33 per cent in America. (Many of those students work with numerous, sometimes controversial, private providers of online education.)

Last November, Bates called for the creation of ﬁve new “digital learning universities” to demonstrate best practices and help post-secondary institutions to “advance more quickly into a digital age,” without being fettered by traditional bureaucratic structures. He says his provocative suggestion, which assumed an unlikely degree of federal and provincial government co-operation, drew “absolutely no response.”

But on his core argument—the need for digital innovation in teaching and learning—there is no disagreement.

“He is deﬁnitely right that we need to take some bold steps,” says David Porter, chief executive ofﬁcer of eCampusOntario, a government-funded non-proﬁt agency that promotes digital experimentation in post-secondary education. It provided ﬁnancial support for the national survey. “It’s not as if [higher education] is not doing it; we are just doing it at a pace behind the U.S.,” he says.

As institutions test and adopt web-enhanced strategies, Porter says he is optimistic that “the appetite for online learning at colleges and universities will accelerate quickly.” Citing the use of online quizzes in class, virtual labs and other digital teaching tools, he says “there is plenty of experimentation happening.”

Some institutions with a long history of distance education say enrolment in online-only and blended classroom courses is growing. At Memorial University, with a 50-year history of distance education, 36 per cent of students took at least one online course in 2018, up from 28 per cent in 2013. Last year, 60 per cent of face-to-face courses on campus actively used an online course component, according to the university, which currently offers 25 programs fully online.

Online options have proven popular with students who work, have family obligations or want to shorten the time to earn a degree, says Gavan Watson, director of Memorial’s Centre for Innovation in Teaching and Learning. “Students want to introduce some flexibility into their schedules,” he says.

Meanwhile, degree-holding adults now look to certiﬁcates, diplomas and degrees with hybrid delivery models to upgrade their credentials without returning to school full-time. “When you complete an undergraduate or graduate degree, the job you do tomorrow is not the same job you are doing in 10 years,” says Watson. “There is a need to come back [for new skills].”

At Queen’s—where distance education efforts began 130 years ago, in 1889—vice-provost of teaching and learning Jill Scott concedes that “mainstream universities were not quick off the mark in the digital space.”

But that’s changing fast, she says. Between 2014 and 2017, fuelled by one-time Ontario government funding for online post-secondary initiatives, Queen’s invested more than $5 million for course development and related infrastructure.

READ MORE: The cost of a Canadian university education in six charts

In 2017-18, Queen’s registered almost 26,000 undergraduate and graduate students in online courses, up 15 per cent from 2016-17. Distance education enrolment doubled between 2013 and 2017. “We will see different permutations and combinations of online and face-to-face delivery that are going to be so intertwined and integrated that they will be almost indistinguishable,” predicts Scott.

She agrees with Memorial’s Watson that working professionals are a growth market for universities, which face only slow expansion in enrolment by 18- to 22-year-olds.

In 2017, Queen’s introduced several new graduate credentials for working adults. Among the options is a 12-month arts leadership master’s degree from Queen’s Isabel Bader Centre for the Performing Arts and the university’s Dan School of Drama and Music. The program has three distinct components: on-campus classes; self-driven online learning; and a short-term placement at an arts organization.

Kevin Tanner was technical director of the Bader Centre when he signed up for the new degree. With eight years of experience in various arts organizations in eastern Ontario, he was not about to quit his day job for full-time studies. “I had no interest in leaving a career that is very difﬁcult to get into,” he says.

The program, says Tanner, “allowed me to open up my horizon across a myriad of areas in the arts industry that I would not have been able to touch on [as an individual], while allowing me to continue to work in my full-time role.” Tanner graduated last year, and credits the program for his “career leap” to a more senior managerial position at Alberta’s Banff Centre for Arts and Creativity, the site of his job placement and where he now works as managing director of production.

RELATED: How to start saving for a university education at (almost) any age

Queen’s pioneering work in blended learning dates to 2011, when professor Jill Atkinson, then teaching the ﬁrst-year psychology course, was troubled by what she saw in the lecture hall: too many absent or distracted students. She and a colleague, guided by pedagogical research, redesigned the year-long course with an eye to improving student engagement.

“If they are not coming [to class] or if they are coming but not sustaining their attention, it doesn’t matter how good the person is in front of the room,” says Atkinson. “We have lost too many of them.”

Alison Carney, who graduates in honours psychology this spring and is among the trained lab facilitators, says the blended learning transformed how she learns—and teaches.

As a student in the lecture hall, she passively took notes from the professor. But online, she becomes an active learner responsible for what she learns, at her own pace, in the digital modules.

“When things don’t make sense, you are forced to work at it,” she says, since the modules are designed for review as often as needed. “In a lecture, if you don’t get it, you ﬁgure it out later.”

In her teaching role as a lab facilitator, she now spends most of her time asking questions of ﬁrst-year students to guide their understanding of course content.

Still, blended learning takes some adjustment by students. “At ﬁrst it was a bit daunting because it seems like so much to do to keep up online,” says ﬁrst-year Queen’s psychology student Grace Rowed. But she quickly ﬁgured out how to thrive academically. “It really places the responsibility on the student to take an active part in their learning,” she says. “That makes the information stick even better.”

Despite its success, Atkinson is careful not to present online and in-class learning as an either/or proposition. “The take-home message from the research is not that one medium is better than another, whether blended, [fully] online or face-to-face,” says Atkinson, now associate dean of teaching and learning for Queen’s faculty of arts and science. “It is that online courses are often developed with designers and pedagogy experts.”

The growth of online teaching tools, in and outside the classroom, has led to “a real shift in this idea of thinking critically about ‘How do we best use the time we spend with our students?’ ” says Simon Bates, associate provost of teaching and learning at the University of British Columbia.

With information and digital content so “easily and ubiquitously accessible to students,” he says professors need to rethink their teaching strategies.

At UBC, enrolment in online-only and blended learning has increased fourfold since 2000, currently serving a total of 16,000 mostly undergraduate students. Bates describes blended learning as “the emerging or predominant pedagogical model.”

In his case, he teaches an in-class, introductory physics course to ﬁrst-year students. But he’s acutely aware his pupils could read the same basic material on the internet. “You need to think hard about what you are doing with students that make it worth their while to come to class,” he says.

For the past decade, he has practised “flipped classroom” strategies that put the onus on students to complete preparatory readings and refresher tests online before they come to his lecture. He also promotes peer-to-peer student learning through online discussions flowing from the material covered in class.

“The asynchronous environment offers the possibility to weave that [online discussion] in and come back to it when we reconvene as a whole class,” he says. Even with increased use of blended delivery, he says, “we are not getting rid of the lecture halls.”

Bates, like others, says institutional support to faculty is essential for professors to feel comfortable with technology as a tool for teaching. He says his university earmarks a hefty $2.5 million a year for faculty-led innovations in teaching and learning.

“We can provide support for instructional design, pedagogy and technology,” he says. “We are trying to help them navigate that and we are also trying to build capacity so the next time they want to do it they can do it for themselves.”