Why climate change means Indonesian students are coming to Canada

The country needs actuaries to advise on the financial risks of catastrophic events. But its universities lack programs. 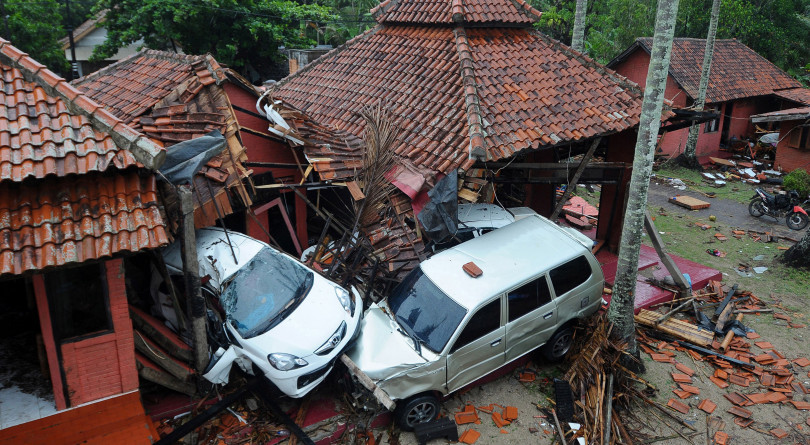 The University of Waterloo made its name as a Canadian pioneer in co-op education, which enables students to earn while they learn, often in jobs related to their studies.

Now the southwestern Ontario school, which accounts for almost one-third of study-and-paid-work placements in Canada, has started exporting its model to countries overseas.

Among them is Indonesia, a southeast Asian island nation increasingly vulnerable to climate change and facing a dire shortage of actuaries to advise pension funds and insurance companies on the financial risks of catastrophic events. Over the past four years, Waterloo has helped Indonesian private and state universities establish new actuarial science programs that include options for paid student placements with employers.

“Co-op is a foreign concept in Indonesia,” says Maydison Ginting, head of the department of business mathematics at Universitas Prasetiya Mulya (UPM), a private business and technology university in Jakarta that adopted Waterloo’s model in 2016. “A lot of graduates in Indonesia complain they can’t find a job [after earning their degree], and industries complain they can’t find graduates who are ready to enter the workforce. The best way to link them is with a co-op program.”

Ginting’s university is one of 12 Indonesian institutions participating in the Risk Management, Economic Sustainability and Actuarial Science in Indonesia (READI) project, a five-year program established in 2015 by the Canadian government to support Indonesia’s efforts to boost its supply of actuaries and formalize co-op in higher education. A spokeswoman for the Department of Global Affairs, which accepted an unsolicited proposal from Waterloo to deliver a project to establish Indonesia as a regional centre of actuarial excellence, acknowledged the university’s reputation “as an international leader in co-op education,” along with its expertise in actuarial science. A shortage of actuaries, the spokeswoman added, “presents a risk to economic stability and growth for Indonesia, which is crucial to ensure poverty reduction.”

The germ of the idea to share Waterloo’s expertise (actuarial science is one of the university’s internationally ranked programs) and co-op education came from Rodney Coelho, a U of W actuarial science co-op graduate who was working for Manulife Financial in Jakarta in 2015.

Coelho’s concern over a dearth of trained actuaries in Indonesia sparked discussions between his company and the Canadian government. They led to READI, which got $15.3 million in funding from Global Affairs and $1 million from Manulife Indonesia. Separately, Sun Life Financial donated $500,000 directly to Waterloo for the project.

Over the past four years, Waterloo has been the sole Canadian university working with nine of the 12 Indonesian universities in the READI project to develop undergraduate actuarial science programs, train lecturers and provide advice about collaborations between academia and industry.

Since 2017, 124 Indonesian actuarial science students have enrolled in co-op. The number is expected to rise rapidly as new university-employer partnerships are established. By 2024, READI organizers expect more than 2,400 Indonesian students to graduate from actuarial science programs. (Only 17 graduated in 2015.) The graduates are expected to feed growing demand from industries in Indonesia and the Pacific region for skilled professionals able to manage big data.

Prior to READI, Indonesia’s government set a goal to produce 1,000 actuaries for the insurance industry over a five-year period, but made little progress because university plans for actuarial programs were at best in their infancy before 2015.

“Our project will be able to deliver more than that in just over five years and is going to help immensely in achieving the government’s goal,” says READI project director, Jean Lowry.

Meanwhile, interest in Canada’s version of co-op is on the rise elsewhere in the world, say officials from Waterloo, which is one of several Canadian universities working with counterparts in Rwanda and Central Asia to integrate paid work experience into curricula.

“Institutions and governments are coming to us and saying, ‘We can see the benefit of [co-op] and we want to add it and extend the reach of our academic programs so we can support students and our engagement with industry,” says Norah McRae, Waterloo’s associate provost, co-operative and experiential education.

For the READI project, Waterloo’s faculty of math sent several instructors, including statistics and actuarial science professor David Landriault, to Indonesia to deliver intensive, week-long courses to Indonesian university teachers who, though knowledgeable in related fields, have limited knowledge of actuarial science.

“They have been asked by their employers to teach the courses, but they don’t have the training,” says Landriault. “So of course they are receptive and want to learn the material.”

As well, the project provides full scholarships to four to six Indonesian professors a year to pursue two types of master’s degrees at Waterloo, both in actuarial science.

In mid-August, Dion Krisnadi was among those on campus preparing for a final exam in his actuarial science master’s program, which includes a crash course on undergraduate content, graduate-level studies and industry-relevant projects that can be replicated in Indonesian classrooms. 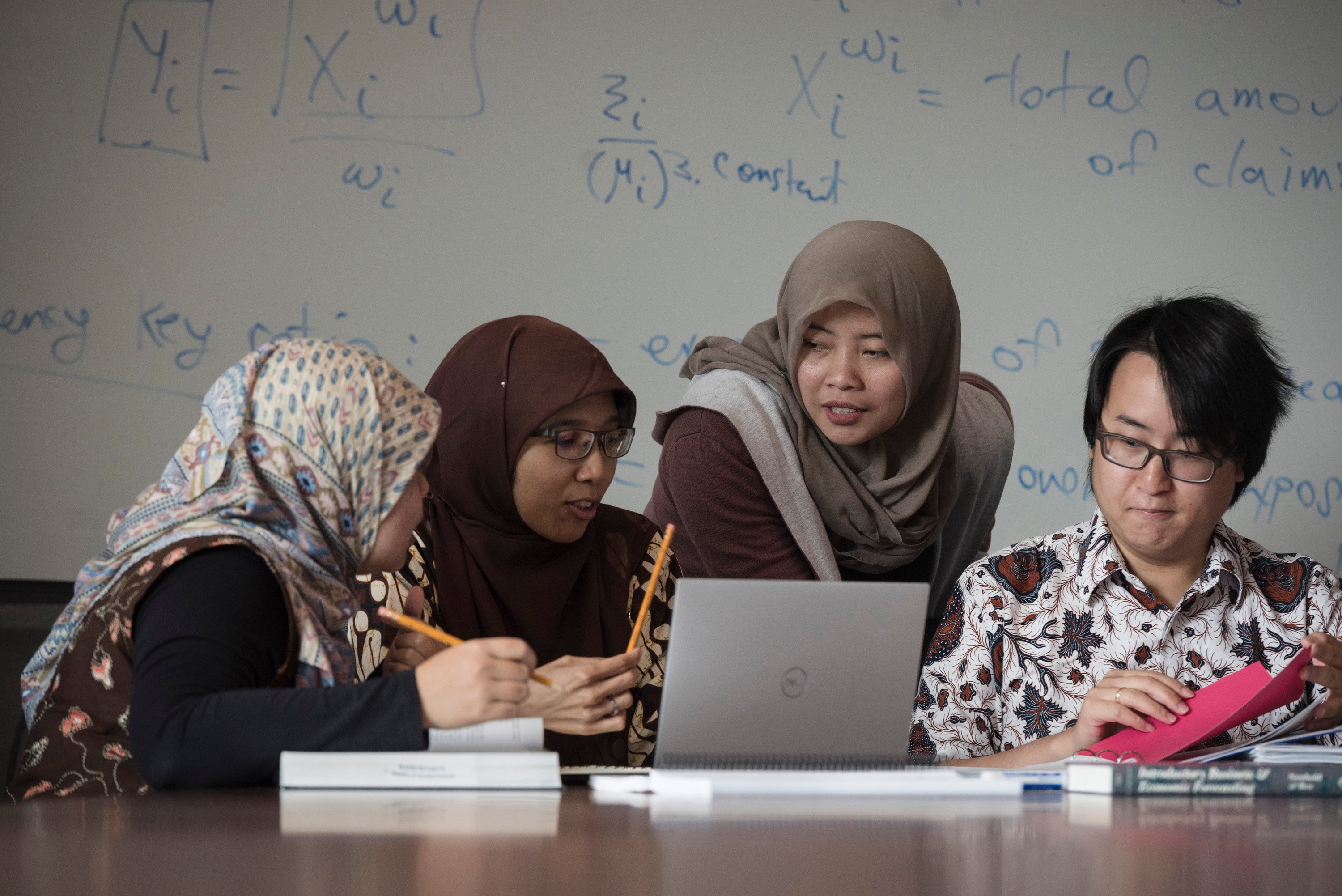 Krisnadi, a lecturer at UPM, already holds degrees in computer science and applied math. By adding actuarial science, he can teach a new generation to calculate insurance premiums for businesses in the face of high-risk tsunamis and other extreme events.

“Having better predictions will help the insurance industry have a better understanding of how to deal with Indonesia’s bad weather,” he says.

Rika Fitriani, a lecturer at Gadjah Mada University in Yogyakarta, Indonesia, also spent the past year at Waterloo. After graduating next spring with a master of mathematics in actuarial science, she will return home to teach in a new bachelor program on the topic.

She says Indonesian students are increasingly interested in a profession previously unfamiliar to them. “Being an actuary is a good job with a high salary,” she says, pointing to the program’s added bonus of gaining pre-graduation work experience through a co-op placement.

For Waterloo, spreading the gospel on high-grade co-op practices is as important as sharing curriculum knowledge on actuarial science.

“We are keen to make sure the people don’t use the word ‘co-op’ and turn it into whatever they feel like, undermining quality at home and abroad,” says McRae.

RELATED: Why universities are hiring “Wikipedeans-in-Residence”

So far, two READI-affiliated universities have adopted formal co-op programs; others are expected to follow shortly. While free to adapt the model to local circumstances, participating universities are expected to embrace co-op’s core principles: paid, meaningful work for students; close involvement of employers; and student self-reflection on their experiences. (By contrast, Indonesian universities typically offer internships that involve students performing menial, unpaid tasks for employers over a few weeks.)

At Pelita Harapan University, a READI participant in Tangerang, Indonesia, companies have become keen partners in a co-op program introduced two years ago, says Eric Jobiliong, dean of the faculty of science and technology.

He says more than 80 companies showed up for a recent co-op event. The READI project also includes outreach to high schools on careers in actuarial science; parents are eager for study-and-work opportunities that could lead to jobs after graduation for their children.

“This is something we can implement in Indonesia because sometimes there is a gap between students graduating from university and the marketplace,” says Jobiliong. “If students will be equipped by the co-op program, we hope after they finish that they are more ready for the job market.”

Last April, the Indonesian government announced a policy encouraging widespread adoption of co-op across higher education. Previously, universities feared incurring a financial penalty from the government if they implemented a Waterloo-style co-op because students, with work experience built into their studies, would take an extra year to graduate.

Prasetiya Mulya’s Ginting recalls first learning about co-op while studying in the United States. Working with Waterloo, he says, “was a good thing for us because we didn’t have to reinvent the wheel.”

This article appears in print in the 2020 University Rankings issue of Maclean’s magazine with the headline, “A crash course in risk assessment.” Order a copy of the issue here or subscribe to the monthly print magazine here.