With professors contradicting official communications, attendance for some classes is sparse while others are still full 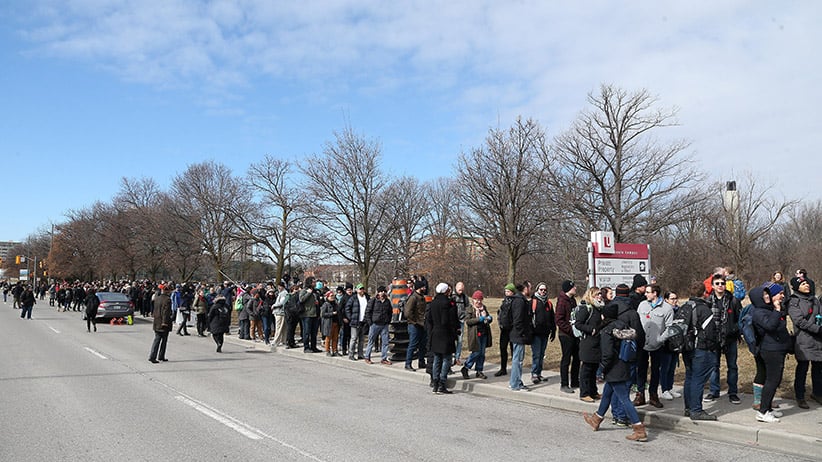 York University remains open this week despite a strike by roughly 3,000 teaching staff, leading to confusion for both students and staff about which classes continue and which are postponed.

Roughly 60 per cent of teaching at York is done by contract faculty and teaching assistants represented by the Canadian Union for Public Employees (CUPE) local 3903. Yet since the strike began on March 5, the school has remained open and classes have continued when feasible. The union claims the administration is attempting to weaken the effectiveness of the labour disruption; the school says they are acting in the best interest of their students. “Our goal is to minimize any negative impact of a strike on our students and their academic year,” Interim Provost and Vice President Academic Lisa Philipps said in an email statement.

RELATED: York on Strike: Why it keeps happening again and again

In a recent email to students, Philipps said: “We want to confirm that all courses that can continue in all Faculties and in the School of Continuing Studies will continue. Libraries, cafeterias, residences, student services, administrative offices and other University facilities will also remain open and available to students.”

The letter provided a link to a website with information on whether their classes were suspended or running during the strike. However, there has been significant confusion regarding classes the website claimed were still running. “The website stated my Humanities class was running as normal, even though the professor had stated the class wouldn’t run in the event of a strike,” says Emilie Miranda, a third-year applied mathematics student at York. “He later emailed to say that what was on the website was false and that we wouldn’t have class,” she adds.

Several students used social media to voice their frustrations after they showed up to classes only to find that their professors and instructors had not.

The decision to continue classes has put undergraduate students in an awkward position. “If you’re a student who wants to show support for the union, you can’t really do so when your classes are still running,” says Aubrey Garcia, a fourth-year digital media student. “We’re caught between two drastic options: either skip classes, lose out on the full education we’ve paid for, and possibly suffer from unfair or lacking accommodations at the end of the strike; or, attend classes but do so against our beliefs and values … If students are still attending classes it weakens the strike’s effectiveness—in that case, how can it be taken seriously?” she says.

However, many students are thankful the university has elected to continue classes. “Not everyone is aligned with either side; some of us just want to get our work done while the administration and the union handle their disputes,” says Victoria Parkins, a second-year psychology student.

Sixth-year creative writing and professional writing student, Ladislav Salga echoes these sentiments: “I do not have to support either side. Neither one has the right to obstruct my pursuit of an education. If I choose to cross the picket line I will.”

Attendance levels have varied so far. “About half the students in my classes have attended,” says Misha Ditmans, a fourth-year biomedical sciences student. “My kinesiology courses have only been about 10 per cent full,” says Nafi Mohammed, a fourth-year kinesiology student. “My second-year chemistry class was about 75 per cent full. It was still difficult finding a seat in the lecture hall,” says Celia Lewin, a second-year biomedical science student.

Picket lines are set up at all seven entrances to campus, and the roads going onto campus are blocked off intermittently. Between 7:30 a.m. and 3:30 p.m., picketing captains let a certain number of cars through the line at a time; while intervals vary, the average so far has been two cars every minute.

Security guards have been stationed at the blockades to ensure there are no altercations (there were several during the last strike in 2015). According to Richard Williams, one of the picket captains, there haven’t been any confrontations, or threats of violence so far.

The strike has also impacted transportation services to and from York, as many transit workers refuse to cross picket lines.

On Tuesday, CUPE 3903 presented York with a counter proposal to their final offer. However, York has rejected the new offer, and it appears the two sides are not close to a new deal.