Biomedical illustration has jumped from ink and paper to studio animation and 3D. It’s tough to crack into, but fun. 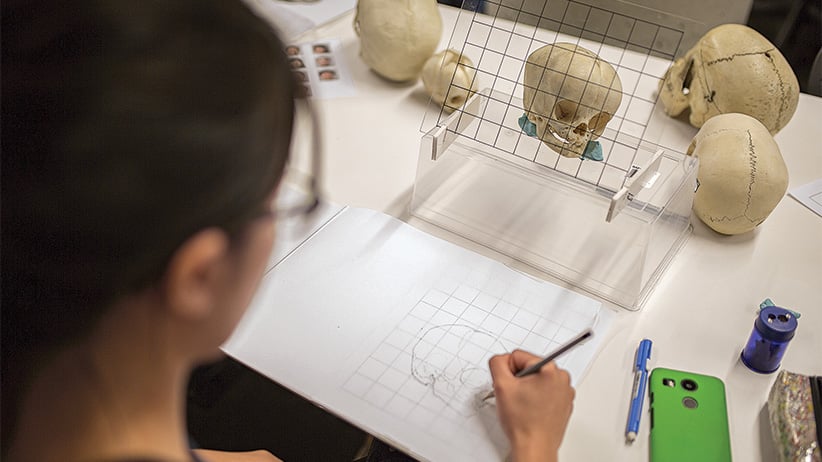 Master of Science in Biomedical Communications student Patricia Nguyen works on skull during at University of Toronto. (Photograph by Nick Iwanyshyn)

The chance to study a centuries-old art form was enough to pull Kaia Chessen to a new country, away from the West Coast’s scenic shores, her home and family.

Chessen, an American from Seattle, is a second-year graduate student at the University of Toronto’s biomedical communications program, one of only four such programs in the world (the others are at Johns Hopkins University, the University of Illinois and Augusta University).

The two-year master of science program trains students in medical illustration, the visual representation of procedures, equipment, and processes related to the practice of medicine. These renderings can appear in various places, including textbooks, patient and pharmaceutical materials, and medical websites, although artists are no longer limited to print.

The discipline’s history goes back to Egypt in the 3rd century BCE, when drawings of the body were made on sheets of papyrus. The modern version mixes new tools, such as animation, 3D modelling and virtual reality, with the traditional.

That variety is a large part of the appeal for Chessen: “One day you’re working on an animated cellular landscape, and the next maybe you’re doing observation sketches in the operating room, or illustrating new medical devices.”

Each year, only 16 to 18 students are accepted into the U of T program, and most have an undergraduate degree in science. Applicants, however, are also required to submit an art portfolio with samples of life drawings, still life scenes and storyboards.

“Many of those students who come in with science degrees, they’ve always had an interest in the visual arts,” says program director Nick Woolridge, noting that this program is a way for artistically minded students to enter a secure job market. According to the program’s annual survey of recent graduates, over 92 per cent are working full-time, freelancing or continuing their education a year out of the program.

Current student Mark Belan has an undergraduate degree in biology, and a master’s degree in geochemistry and astrobiology. The work, he says, doesn’t offer the same creative freedom as traditional art—since medical illustrations must remain scientifically accurate—but innovations, such as cinematic design and virtual reality, are providing more opportunity for originality.

“It’s all over the place,” Belan says of the industry.