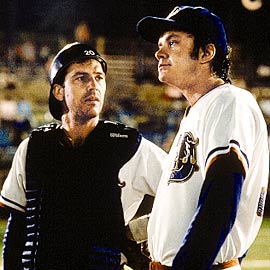 La première étoile: Al Coates, the Toronto Maple Leafs newly appointed director of player personnel. Like his boss Cliff Fletcher, Al was once the GM of the Calgary Flames. The Leafs believe they now have the management team in place to win the 1989 Stanley Cup.

Who’s got tickets? Game 6 of Lakers versus Celtics. If Boston—who, two games ago, came back in one of the biggest comebacks in NBA finals history—wins at home tonight at the Banknorth Garden, they take the championship… And at Euro2008, two rivals from the Group of Death are battling for survival this afternoon. World Cup Champion Italy takes on France, another desperate powerhouse. But *if* dark horse Romania beats the Netherlands this afternoon, both Italy and France—traditional favourites—go home in disgrace. Quelle honte.

Fun police: The quarters for Euro2008 will soon be under way. Interleague play continues in baseball. The NHL draft happens Friday night in Ottawa, with the promise of some blockbuster deals before the July 1 free agent deadline. But with Rocco gone, everything seems dull and grey. Can we have another U.S. Open?

Extra Bases: ESPN has put together a great tribute to Bull Durham, the second-best sports movie of all time (Hoosiers is still No. 1)… Sure, it’s still nine months away, but pencil North Carolina into the “National Champion” line of your March Madness bracket… And New York Yankees ace Chien-Ming Wang is out for 10 weeks after pulling up lame on the base paths. Team owner Hank Steinbrenner blames the entire National League.