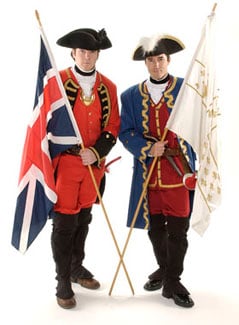 The planned, announced and now-cancelled recreation of the Plains of Abraham battle (you know: the English beat the French and, yadda yadda, the birth of Canada) has made for a highly-symbolic wintertime psychodrama. Citing undisclosed and nebulous “security threats”, National Battlefields Commission director André Juneau kiboshed the event, which was set to take place this summer. Too much has been written already, so Deux Maudits Anglais had a cross-border chat about it. (Which we have now put into written form. Damn you, cruel irony…)

MARTY: Well, I hope you’re happy, Philippe Gohier. I’d just bought a brand new tweed blazer, short pants and a proper sunhat in order to take in the festivities on the Plains of Abraham this summer. My God, what a show it would’ve been: The English storming the French, the smell of blood and gunpowder in the air, James Wolfe riding victoriously over the rotting remains of General Montcalm… I was even planning on streaking the field wearing nothing but my Union Jack cape. And now, thanks to all these naughty séparatiste ruffians, my summer plans are dashed. Don’t lie: I can practically see you out there in Toronto, shackled as you are to the English teat, happier than a clam that history has once again been papered over in Quebec.

In all seriousness, though: what the hell?

PHIL: I can’t lie to you, Marty: I am somewhat happy the re-enactment is canceled, though not for the reasons you might suspect. I was afraid that, given all the hubbub, I might actually be sent to cover it. I’ve been pre-emptively bored by the mere thought of having to watch the bloody thing.

That said, I still can’t figure out who comes out a winner in all this nonsense. The National Battlefields Commission looks either wimpy for having cancelled it, or delusional for having thought it was a good idea in the first place. Its opponents, including Marois and Duceppe, seem petty for having gotten involved. And the actors that were putting it on, like the one quoted in The Star lamenting that a bunch of “terrorists” had shut it down, aren’t doing themselves any favours with hyperbolic statements about the historical importance of re-enactments.

MARTY: That’s been the thing that’s struck me–the boredom. I was talking about all this the other day on the radio, and it struck me that we’re the only ones talking about it. As is often the case with many historically significant events in Quebec (see Quebec City’s 400th last year, the anniversary of the Patriotes rebellion this year, or Canada Day any year), it is the politicians and the fringes talking up the wrongs visited upon the province, real or imagined, only to be picked up and broadcast by the press. I seriously have not seen, heard or spoken to a single Quebecer who cares either way about who or what dresses up and shoots at one another for fun and merriment in Quebec City. The Bye-Bye thing was a bigger scandal, because people actually talked about it. Events like the Quebec City reenactment are strictly the realm of a handful of politicians, perpetually infuriated Pierre Falardeau types and, well, us. I think most people are just looking for a party (or, in the case of Canada, a time to move out of their apartment.)

It’s funny; Lagacé wrote a column in which he quoted me making fun of him as we drove by the Plains of Abraham last year. “See that, Patrick? It’s where we kicked your ass,” I said to him. You’d think, listening to the likes of Marois et al., that joking about the conquering of a people would be the height of impropriety, akin to joking about dead babies or slavery. To me, though, it’s about as edgy as a mother-in-law joke. I’m as English as crustless toast, yet I have French, Scottish and Irish blood swimming around my brain. Just about everyone else living here is the same, and those who portend differently are either ignorant or worse.
That said, I’m not against the canceling of the damn thing, if only because dressing up, firing guns at one another and then shaking hands and going home cheapens the actual (very bloody) event.

PHIL: I’m not sure I agree politicians played a significant role in the whole thing. If anything, aside from Duceppe’s and Marois’s half-hearted and belated statements about the whole thing, no one else really stepped up. Charest, in all his hyperbolic glory, has tried to use the cancellation to prove the PQ has ties to violent, fringe movements; the séparatisse-baiting Conservatives haven’t said a word, and even the Liberals, once the champions of no-holds barred strong-armed federalism, couldn’t be bothered to take up the fight. That left the field wide open for the Falardeau/Patrick Bourgeois contingent to take over the debate, which they promptly did. Isn’t it odd to think the hardest of the hard cores has finally won a battle—however symbolic that battle may be—and that, deep down, it just doesn’t matter?

MARTY: Ha! So they’ve won the battle over the Battle, then. But what about the war? The PQ has about four-and-a-half years to wait for another election, and even then they aren’t likely to call a referendum. Charest is still absurdly popular, despite his frequent massaging of the truth recently. What do the purzédurs do in the meantime? They need a war on Christmas, or something.

FILED UNDER: Battle of the Plains of Abraham National Battlefields Commission purzédurs re-enactments