A 'much better' Kate, duchess of Cambridge, leaves hospital smiling 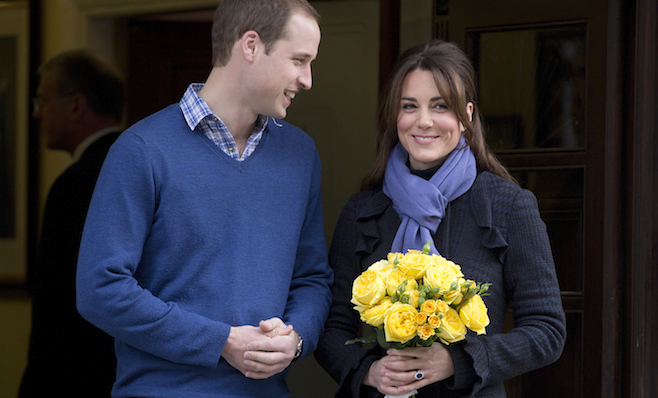 Britain's Prince William stand next to his wife Kate, Duchess of Cambridge as she leaves the King Edward VII hospital in London on Dec. 6, 2012. (Alastair Grant/AP))

Kate, the duchess of Cambridge, walked out of a London hospital Thursday, where she was admitted on Monday after suffering from a severe form of morning sickness, which was brought on by the early days of her pregnancy.

Kate, holding a bouquet of yellow roses, stood by Prince William and said “I’m feeling much better, thank you.” She paused to smile for throngs of waiting media before stepping into a waiting Jaguar with the Duke.

The Telegraph reports that Kate will likely be cleared of her official duties for the next month and will be given time to rest. “She may not appear again in public until the Royal family attend church at Sandringham on Christmas Day,” writes reporter Gordon Rayner.

Kate’s release comes one day after Australian radio hosts pretending to be Queen Elizabeth and Prince Charles called the King Edward VII Hospital and were able to get through to a head nurse who gave out sensitive information about Kate’s condition. The prank left the hospital apologizing, as it promised to reexamine its phone call protocol.

FILED UNDER: Will and Kate