As a boy, he always wanted to help, especially when it came to rescuing animals. He later followed his dream to be a firefighter. 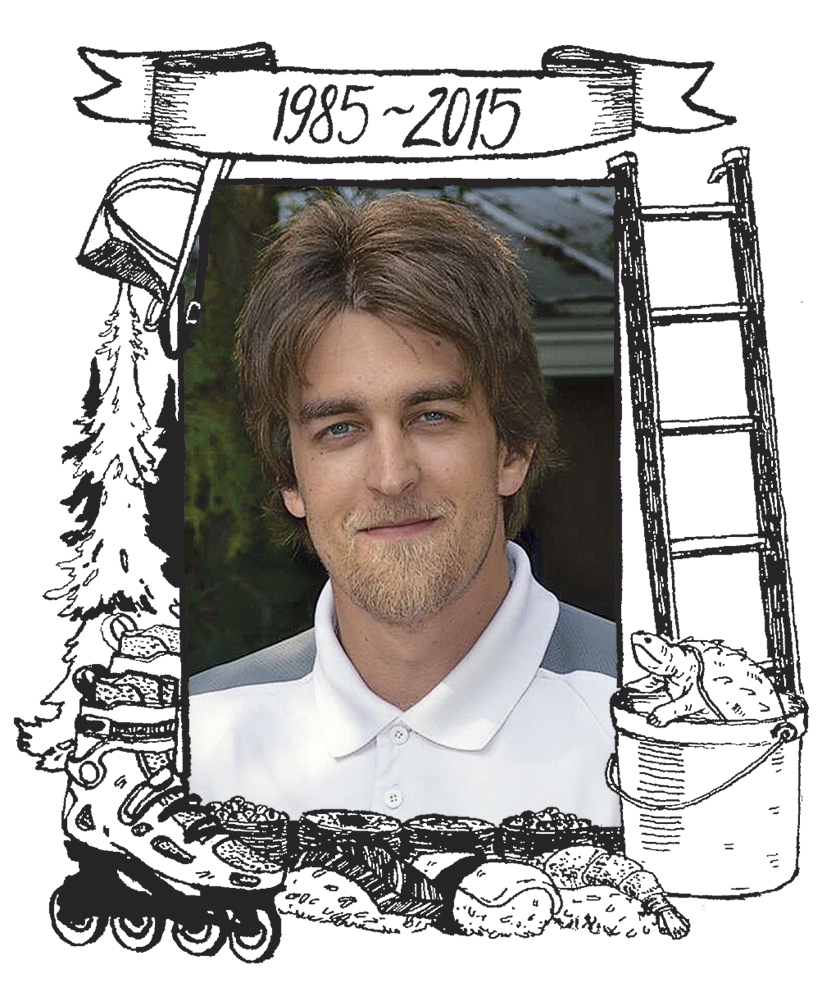 Adam Robert Brunt was born on Jan. 31, 1985, in Bowmanville, Ont., to Christy and Al Brunt, who worked for the Ontario government in the accounting and IT departments, respectively. Adam was their middle child: His older sister, Ashlee, was born in 1983 and his younger brother, Tyler, was born in 1987.

Adam was an inquisitive child. As a toddler, he tried to join the adults in a game of baseball. “He would watch very intensely and, the minute he was able, he played around with a ball any chance he had. I’m pretty sure ‘baseball’ was the first word that came out of his little mouth,” Al says.

Surrounded by uncles and cousins who were carpenters, Adam loved to peruse the Canadian Tire catalogue, even at the age of three, before he could read. He was a hands-on kid who always wanted to help out, says Al. “He’d just grab our tools and try to use them and, most of the time, he actually used them properly. Adam was always on a mission to do something well.”

One day, at the age of four, Adam came inside after playing in the backyard and every pocket of his jean jacket was brimming with dew worms. He desperately wanted to keep them, but his parents made him put them back. “From then on, he was all about finding little critters to call his own,” says Al. A few years later, Adam become more concerned with helping wildlife stay out of danger. When Adam was seven, the Brunts started spending the summers at their trailer on Pigeon Lake, in the Kawarthas. Every morning, he would head out to the nearby park with a plastic bucket to remove any snapping turtles in the area that sometimes preyed on the baby ducklings that lived there. He couldn’t bear the thought of the ducklings losing their lives that way.

As children, Adam and his siblings would often clash and get into petty arguments. But that started to change as they grew up. One night in high school, Ashlee came home from a date and Adam went and sat in her date’s car to have a stern chat. “He told the guy to treat me right and be respectful,” says Ashlee. “I’m older, but it was like he was a big brother, always trying to protect me.”

After graduating from Bowmanville High School in 2003, Adam started the law and security program at Durham College, in hopes of one day becoming a police officer, or a firefighter, like his uncle Brent. He graduated in 2005 and started his science degree at Trent University—mostly to prove to everyone he could get into university. He left Trent in 2006 after getting a contract offer in IT with the Ontario government, where he worked for the next three years.

But he couldn’t get firefighting out of his mind. After several long chats with his uncle in 2014, he decided to go for his dream and apply for the one-year firefighting program at Durham College. “He didn’t care if he was older than everyone; he wanted to make the most of his life and his passions,” says Ashlee. 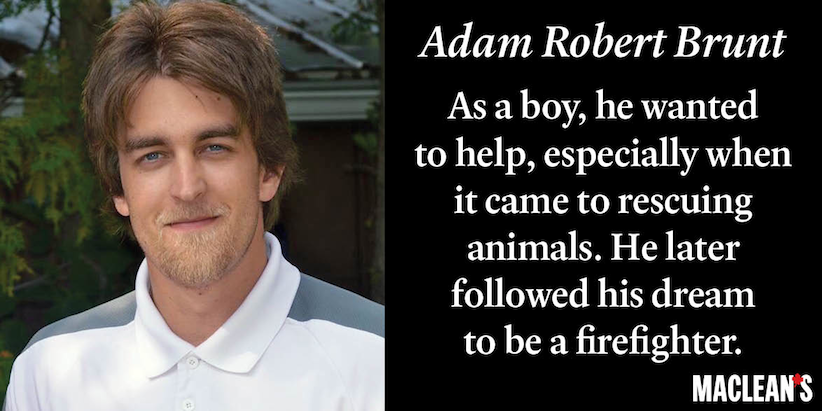 That March, Adam met Jenna McNamee, a 29-year-old naturopath from Whitby, Ont., on the dating website Plenty of Fish. For a few weeks, Jenna and Adam chatted online about everything. “His messages were very sweet and caring, and I knew we shared a lot of the same values and interests,” Jenna says. After they went on their first date—sushi and Starbucks—they were inseparable. They spent the summer rollerblading, fishing and taking Adam’s husky, Boris, for long walks. “He supported me every day, and inspired me to overcome my fears, including driving on the highway,” she says.

Last September, Adam got accepted into the firefighting program. He was ecstatic. He dove into the coursework and training to learn CPR and first aid. “He had this determination I had never seen in anybody,” says Jenna. “He wanted to be the best firefighter possible. His whole heart was in it.” Adam and Jenna planned on getting married and starting a family after he finished the program in 2015.

On Feb. 7, Adam and several of his classmates drove to Hanover, Ont., to take a supplementary cold-water rescue course, run by a company not affiliated with Durham College. After a practice rescue session in the pool, he texted Jenna to say it was challenging, but enjoyable. The next day, the team went out on the Saugeen River to test their skills. After floating down the icy river as part of the exercise, Adam got trapped beneath a patch of ice for 15 minutes. He was rushed to the Hanover hospital, where he was pronounced dead. He was 30.

FILED UNDER: firefighter the end