Anthony Weiner returns to Twitter, warns there may be more sexy pics out there 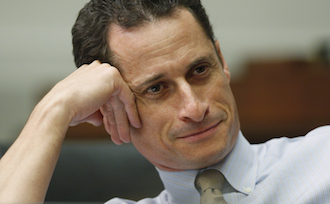 Anthony Weiner, the former congressman who sent his political career into meltdown after posting a picture of his crotch on Twitter, is back on the social media service with a warning: there may be more pictures of him on the Internet.

“If reporters want to try to find more, I can’t say they’re not going to be able to find another picture, another person who may want to come out on their own,” Weiner told RNN-TV in an interview.

Weiner disappeared from public life for nearly two years after being caught sending sexual photos to a college-age woman online (a woman who was not his wife) and then lying about it. He eventually came clean and stepped down.

But, he has launched a comeback in a series of scripted television interviews and apologies. His return comes amid speculation that Weiner wants to run for New York mayor.

A run for mayor seems likely from Weiner’s relaunched Twitter account, which has the slogan “Fighting to keep New York City the Capital of the Middle Class” on a background of historic New York City landmarks. The Twitter site also includes a link to a white paper called “Keys to the City,” which sure looks a lot like a campaign platform. The document is actually an edited version of something he first published in 2008, points out Al Kamen at The Washington Post. Among other edits, the word “impotent” has been removed from the text.

Weiner seems to be taking things slow after his first tweet on Monday, April 22. Weiner has only tweeted three times since he activated his account. All tweets have been tastefully on topic, with links back to his “Keys to the City” document.

Of course, you can’t show your genitals to the world on Twitter and then expect to make a quiet comeback. Twitter was rife with puns Monday as users learned of Weiner’s return.

In somewhat related news, former president Bill Clinton has been tweeting, too, after comedy show host Stephen Colbert forced the former president to join, using the handle @PrezBillyJeff — the usernames @PresidentClinton and @WilliamJeffersonClinton were already taken.

Since the show in early April, Clinton hadn’t used the new account, but he picked it up Wednesday, with shout outs to Colbert and his daughter, Chelsea Clinton. He also changed his user name to the less hilarious @billclinton.

Sorry I couldn’t make it @stephenathome. I’ve been busy with @clintonfdn work on global heath. Thrs is #WorldMalariaDay you know #Raincheck?

Excited to join @chelseaclinton and my good friend @stephenathome on Twitter!