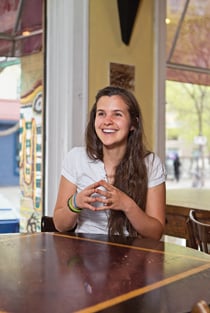 Brigette DePape was a uniformed Senate page when she made herself an instant symbol of youth protest nearly a year ago by silently holding a handmade “Stop Harper” sign on the floor of the upper chamber during the reading of the Conservative government’s Throne Speech. Since then, she’s been travelling the country meeting with activist groups, and this week the 22-year-old launches Power of Youth, a collection of essays she co-edited on activism.

Q: You went from unknown to icon awfully quickly. Did you ever find the transition intimidating?

A: To be honest, I was really scared when I took the action. The hardest part was that moment of, “Should I do this?” I could either stand back and watch as the government was eroding our social services and destroying our environment or I could do something. I was scared about my parents’ reaction, my family’s reaction. But then I really thought about the people who are impacted by Harper—women, indigenous people and workers. That really gave me strength and the feeling that I’m part of something bigger.

Q: How did your parents react?

A: My dad was really critical of the action. My parents want what’s best for me and all that, and I respect that. So they were concerned—“How are you going to pay the rent?” and that kind of thing. But then there was a real sense from my sisters that they were proud of me. I do feel a lot of support from my family. That’s huge and really important to me. To be honest, I think my dad is coming around.

Q: It wasn’t just a fleeting moment. You plunged into a new life.

A: It’s been really incredible. It’s given me a chance to meet with other people who are organizing for progressive change across Canada, and I have been so inspired by people who are taking action in their communities. That’s what the book is about, showing the work that’s being done around Canada, and by young people especially.

Q: How does a lone protester end up travelling widely and editing a book?

A: I put the collection together with Erika Shaker, the executive editor of Our Schools / Our Selves journal with the Canadian Centre for Policy Alternatives. And a number of groups—student groups, unions, women’s groups, environment groups—contacted me and asked if I wanted to come and meet with them, and start to build the vision that we believe in. The values that so many of us hold are not being represented by our government and our system.

Q: You came to prominence just a few months before the Occupy movement emerged in New York and then spread. What did you make of that?

A: It’s been an incredible year of people power, and people reclaiming their agency for a future based on their values of caring and sharing instead of greed. That’s why I’m so excited to have helped to edit this book, which shows how young people are taking action for a more sustainable and equal world.

A: The problem is often we see this myth that youth are apathetic. I really hope to dispel this by showing the work of young people across the country who are engaged and are working for a better world.

Q: Don’t you run into people your age who don’t seem to care much about politics or public issues?

A: I do talk to young people who are not engaged. But it’s not that they’re apathetic. A lot of the time they really care deeply. It’s just that often times they don’t know how to get involved. One thing that I hope the book shows is different ways young people can get involved and use their skills to be part of something bigger.

Q: Before his death late last summer, Jack Layton spent a lot of time trying to coax young activists into party politics, arguing they belonged in his NDP. Does trying to get elected fit with your vision of activism?

A: I think there is a sense by many young people of lacking faith in governments that are in power, not believing in them because they aren’t meeting the needs of anyone in our society. So I think there is a sense that we need to use non-traditional means of protest to achieve our common goals around the public interest. It has been social movements that historically have overcome these massive injustices, if you look at the civil rights movement or the women’s movement.

Q: Look at the cluster of very young NDP MPs elected in Quebec last year, though. They found a path straight into the heart of the democratic system as it now stands.

A: Young people should follow their passions. At the same time, we need a strong social movement to put forward any real changes to current policies.

Q: The Occupy movement succeeded in drawing attention to income inequality, but the demonstrators were often criticized for lacking clear policy demands. Beyond denouncing greed, do you think activists have a responsibility to be precise about what they want?

A: I think that’s sort of emblematic of our society, when we’re asking, “What is it that people wanted?” It’s not people wanting. It’s people wanting to give. They want to give all of themselves to changing a system that they know isn’t working. Occupy was really about fundamental system change on many levels. That process takes time, but that doesn’t make it any less important. The fundamental issue was around inequality. It’s only as we come together through acts of protest that we’re going to find solutions.

Q: Your book has essays on crime, the environment, race—all sorts of issues—but the common denominator seems to be a critique of the economy. Are the solutions you have in mind compatible with a free-market economy?

A: In the neo-liberal way that it’s functioning, no. Absolutely not. We have seen how people of colour, people without much money, even the middle class—it’s not working for these people. So we need to rethink everything. The book is, to me, really important for sparking some conversations on systematic failure, not just focusing on the problems, but on how we can solve it.

Q: Let’s focus on one big point of debate then—the future of Alberta’s oil sands, and of pipelines to take its bitumen to U.S. and Asian markets. Where do you stand on that?

A: In the book there are some great examples of people who were mobilizing around the Keystone pipeline, because of the spills that could come with it and because the full development of the tar sands means irreversible climate change. I was just so inspired by the incredible mobilizations that happened to have President Obama stop the Keystone Pipeline.

Q: You aren’t troubled by the argument that stopping resource development would badly hurt the economy?

A: Climate change cannot continue. There are some very clear alternatives. The government could choose to be spending on clean alternative energies, rather than subsidizing the tar sands. There is a way to have a clean and just economy.

Q: On another current issue that’s brought young people into the streets, what do you make of Quebec’s prolonged student protests against tuition increases?

A: I’m incredibly inspired by the student protests in Quebec. I’ve talked to them and asked them, “How did you do this?” Their movement is really a movement for people across Canada, for everybody having the ability to go to school and have a quality education, not just the richest people. We need to get organized and take action. That’s the lesson we can learn from them.

Q: In other provinces, though, where tuition is higher, so are participation rates in post-secondary education. Doesn’t that suggest that many students can afford to pay a bit more? And, after all, they’re the ones who will benefit most directly from getting a better education.

A: Some families have to choose between sending their child to school and paying for child care or paying the mortgage. It forces them to make really hard choices that don’t allow all family members to achieve their full potential. That’s not fair. The fees are a major barrier. It means some students are left with thousands of dollars in debt, which sometimes makes them take jobs they don’t believe in.

Q: I understand your book launch this week is at Mondragon, a coffee house in Winnipeg, your hometown, that’s run as a collective. I had a coffee there recently. It’s the kind of place where it feels like the General Strike was put down maybe a day or two ago.

A: I’m very inspired by the history of Winnipeg, and I’m just now starting to really understand my roots. I’m really inspired by the 1919 General Strike. I think we need that kind of people power now.