Canada's GDP grows 1.8 per cent in Q2, a tad better than expected

The Canadian economy expanded by 1.8 per cent between April and June, according to Statistics Canada. The number was only a touch above the consensus forecast and just below the Bank of Canada’s projection of 1.9 per cent, but it was enough for Finance Minister Jim Flaherty to pat himself on the shoulder, saying that Canada continues to have the strongest economic growth among G7 countries. (For the record, we beat the U.S. by a “whopping” annualized 0.1 per cent this quarter, according to StatsCan.)

The lion’s share of our somewhat muted growth came from robust business investment, with companies investing in new equipment and stocking inventories. Investment in the housing sector, however, was unusually week, rising by less than two per cent annualized. As foreshadowed in earlier retail reports, Canadian consumers kept their wallets fairly tightly shut, with demand growing by a mere 0.3 per cent in the second quarter. The real drag, though, where exports, which edged up by only 0.2 per cent, far slower than imports, which soared 1.6 per cent. 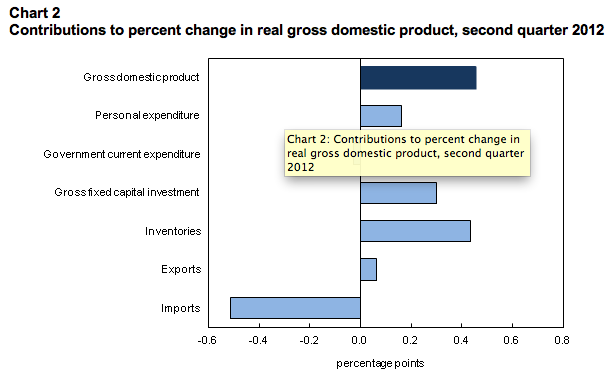