What to do on a cross-country drive? Jump from a plane

NOW: (Regina) So much for the high-quality road that Manitoba’s minister of transport, Steve Ashton, told me about this week. Somewhere west of Brandon on the Trans-Canada Highway, a flying rock scored a direct hit on the windshield, scoring a starburst just to the left of my line of sight. 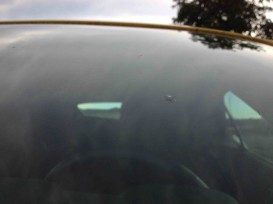 I was passing a truck at the time. The vehicle in front of me was waaaaay in front. There were some loose stones on the road from recent maintenance, but there wasn’t much I could have done to avoid it.

We drove into Regina yesterday and I went looking for a Chip King stand, which I found in the Safeway parking lot. For $55 all in, Taylor Wandler told me he could fix the chip so that it wouldn’t spread and crack the rest of the windshield. The problem is that tiny air bubbles get into the crack and can flex the glass with vibration, or with temperature change, and that can crack the whole thing.

Taylor went at it with a small drill to create a hole for the air to escape, then a suction thingee that pulled the air out. Then he injected resin into the crack to fill the glass so that it was a solid piece again. Took 20 minutes. 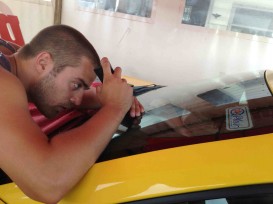 Checking out the chip

There’s still an obvious mark on the glass if you look for it, but I’m not worried about it spreading now. And to be realistic, I’ve driven on lots of gravel roads so far with no issues. It’s ironic this should happen on Canada’s national highway.

Chatting with Taylor while he was making the repair, I realized he’s in a pretty good business. His dad has owned the franchise for the last 15 years and Taylor’s sister works for the company too. But think about it: There will always be windshields and there will always be stone chips in them. The price is a fair exchange for the work, and customers don’t leave feeling ripped off – they blame the government, not the repair person. And most important, the business can’t be outsourced. Nobody in India can fix your windshield – you’ve got to be right there on the spot. Pretty good business.

THEN: (Burrows, Sask.) Remember Percy Gomery? I introduced him back in northern Ontario, where he was driving home to Vancouver from Montreal with his long-suffering wife “the Skipper.” When we left them, in 1920, they’d just gotten mired in a bog deep in the woods, wrecked their car, and the Skipper was becoming hysterical. Read the blog here.

I haven’t mentioned him since then because the two of them cut through the States after reaching Sault Ste.-Marie. They came back into Canada south of Winnipeg – where they were stopped for speeding at 65 km/h – and quite enjoyed Manitoba, but found Saskatchewan roads to be abominable.

“Through Moosomin we loped along, over roads which, at their best, gave us something the motion of a prairie wolf, to Wapella, a typical elevator village. Starting next morning early we did a twenty-mile succession of mud-holes, which forcefully suggested to our minds a string of beads, in more senses than one. Though it might be recorded that between Wapella and Whitewood we found the one and only road-construction gang seen during the whole 500-mile drive across Saskatchewan.” 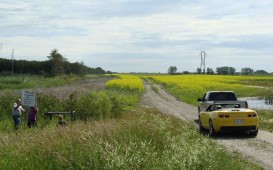 Every year though, the road was slowly improving. We stayed at the farm of Phyllis and Ewan Armstrong, Maclean’s readers who wrote and offered us a meal, and their property straddles the current Trans-Canada between Wapella and Whitewood. Previous to its construction in the 1950s, the two-lane gravel road lay parallel, just to the north of the highway, and previous to that, in Gomery’s ’20s, the clay road ran parallel to the south through what is now their back yard.

The next morning, Ewan took us four miles north to a track through a field that marks the route of the old Ellis Trail, laid out in the late 19th century as the road across the prairie. There’s only a placard there now to tell anyone that it ever existed and we found it dug up and bent by vandals. The trail is historic and protected but local farmers want it redesignated as regular agricultural land, so they can plow it in and make use of it as part of their fields. Life goes on.

SOMETHING DIFFERENT … (MOOSE JAW) It’s on a lot of bucket lists, and with my 50th birthday approaching rapidly, jumping out of an airplane just seemed like a good thing to do. And if I could do it beside the Trans-Canada, out on the limitless prairie, then all the better. 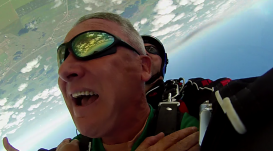 Tandem diving doesn’t take any special training – just $250, a lot of initials on a waiver form (and a compulsory video to explain the waiver) and 10 minutes of basic information. My tandem instructor, Mark Ehrmantraut, buckled me in and his dive team partner Pablo Moreno volunteered to help shoot video.

Mark and Pablo call themselves the Saskatchewan Provincial Free-flight Champions, though they laugh when they do so. Mark’s got nearly 5,000 jumps to his name and Pablo’s trying to catch up with 700. They love nothing better than hurling themselves from a plane toward the prairie.

“It’s a huge addiction for me,” said Mark, a high school science teacher who made his first jump – a tandem – in 1997. His wife jumped then, too, but she’s only been a couple of times since. She’s busy now as an assistant deputy minister with the department of highways, which seems fitting for this blog. 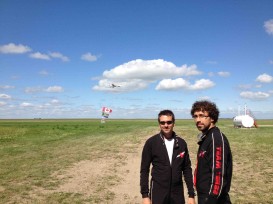 “Freefall is the adrenaline rush, but now we’re more into the technical side of it. Every time you try something new, a new trick, you get that sense of your first jump. You can’t beat it.”

Pablo, a maintenance worker at the Regina Casino, agreed: “The first time I flew head down, and I was stable, it was awesome. It doesn’t get any better.”

And me? It’s tough to describe in words, except to say the intense rush at the beginning as you plummet from 10,000 feet at 250 km/h is like nothing you can feel on the ground. Then when the instructor opens the chute at around 5,000 feet, everything suddenly becomes very calm. You’re not falling – you’re floating, right up until you touch the ground.

Want to see for yourself? Take a look at the video here.

SOMETHING FROM TRISTAN: Today was an even-out day for me and my dad because he got to go sky-diving but I got to go down the water slide at the hotel like a billion times. 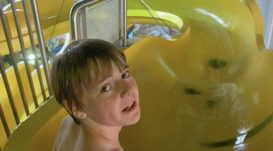 Tristan, about to drop 40 feet

I still think he got the better half of the bargain because he got to go sky-diving but apparently there is a guy in Montreal will take me when I’m 14 so all I have to do is convince my mom that it is safe and I’m ready.

The only problem is that convincing my mom won’t be so easy and I have to wait a year and a bit.