Daft Punk pictured without their helmets on 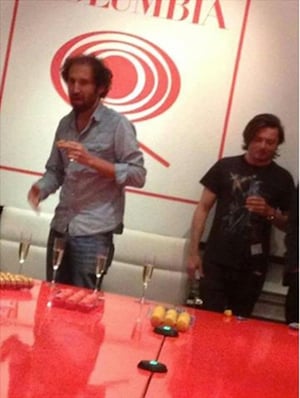 The members of the electronic group Daft Punk have been photographed without their trademark helmets on.

Guy Manuel de Homem-Christo and Thomas Bangalter, the French duo behind the Daft Punk, wear robot costumes, including helmets that obscure their faces, for shows, in photographs and on their album covers. They are rarely seen without the helmets on.

But fellow electronic duo The Knocks posted an unauthorized photo of de Homem-Christo and Bangalter playing beer pong amid glasses of champagne and macarons in Columbia Record studios in New York late Wednesday. The photo was quickly deleted from The Knocks Facebook page and was replaced with the message: “GUESS WE WEREN’T SUPPOSED TO POST THAT PIC :X’”

Homem-Christo and Bangalter, or at least two guys wearing their helmets, were spotted earlier that day in New York City, where they appeared to be posing for a high-fashion photo shoot.

They weren’t quick enough, however, and the photo is circulating on the Internet.

Maybe the photo of unmasked duo will be a small consolation to former Oasis frontman Liam Gallagher who, upon the release of the group’s latest album Random Access Memories, said he hated their single “Get Lucky” and told the band to: “Take your f–ing helmet off. Let’s see what you look like sans helmet, whatever you’re called.”