THEN: It’s not been so far to drive today, but back in 1962 this was the end of the paved road west from St. John’s. The highway turned to corrugated gravel before Whitbourne and separated the casual tourists from the determined travellers. 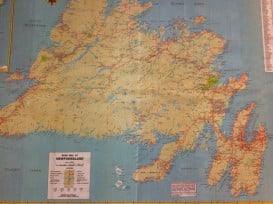 Author Edward McCourt described his 1963 drive along it in his book The Road Across Canada as “an endless succession of iron-surfaced washboard, gaping pot-holes, and naked rock – a shoulder-twisting, neck-snapping, dust-shrouded horror.” And by all other accounts, he was being kind.

It was not until 1965, when McCourt’s book was published, that the road was properly paved across the province, at great expense. And canny premier Joey Smallwood made sure the great expense came from the pockets of the federal government, not the provincial coffers. More about this tomorrow.

NOW: I began my drive with the Camaro’s wheels in the Atlantic Ocean, dipping into the water on a wharf at Petty Harbour, just south of Cape Spear, the most easterly point in Canada. Like all the pioneering drivers, it’s important to drive out of one ocean in order to drive eventually into the other one at the opposite side of the country. I did a trial run with some friends yesterday, but then it was late in the afternoon and today it was noon: low tide. 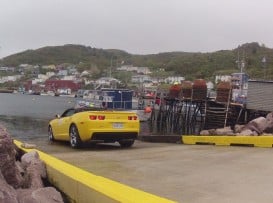 The Camaro dips its wheels in the Atlantic

The reluctant tide meant I had to drive a lot farther down the boat ramp, with the rear driving wheels venturing down onto the wet concrete that had been submerged just a couple of hours earlier. It was very slippery. The CBC sent a cameraman to record the event for posterity, and he slid his shoes around on the concrete. “If this is too slippery for those tires, this video could go viral,” he warned, probably rather hopefully. Last year, a YouTube video of a million-dollar Ferrari Enzo crashing into the sea during the Targa Newfoundland was viewed millions of times. You can see it here if you have a cruel sense of humour – and irony.

But all went well and the wide tires gripped and the car made it back onto the road. You can see the CBC clip here. I gathered some salty Atlantic water in a bottle that I’ll pour into the salty Pacific when I reach the opposite coast, and then drove into St. John’s with the top down for a last look at the Mile One Centre before heading out to the dump and the real start of the Trans-Canada Highway. 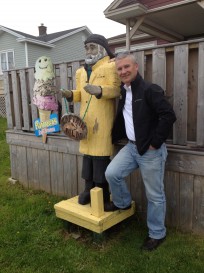