THEN: When Jack Haney arrived on the train here in 1912 to drive Thomas Wilby across the country on the first coast-to-coast Canadian road trip, he thought he’d be meeting up with a fellow gearhead. Haney, after all, was the chief mechanic for the REO car company in St. Catharines, Ontario, and Wilby was the experienced journalist who’d persuaded REO to supply him with a car – and with a chauffeur, since gentlemen didn’t drive themselves. 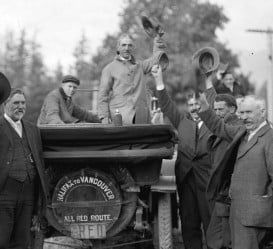 Wilby, standing in the car, and Haney, sitting at the wheel.

Haney turned up with three cases of clothes and supplies; Wilby had his writing equipment, a shaving kit and a spare pair of socks. He expected Haney to purchase clothes for him as a valet might, using a REO expense account, and after some phone calls to St. Catharines, this is what happened. Wilby also expected Haney to call him ‘sir’. So much for being a fellow gear-head.

And then they lost the car.

The two men spent 53 days together on their road trip and they hated each other. Follow here each day as I revisit them while crossing Canada, now from Halifax to Victoria.

NOW: Today was a planning day. As I did a couple of weeks ago in St. John’s, I scouted the Halifax area for a suitable boat slip so that tomorrow I can dunk the Camaro’s wheels into the Atlantic (again), ready to drive across Canada to dunk them into the Pacific.

I can’t use the same place that Wilby and Haney found in 1912, opposite Oland’s garage in Halifax, because it’s long since been filled in and made inaccessible to cars. But I did find an excellent slip at Eastern Passage across the bay east of Dartmouth, which looks to be both shallow and forgiving. Again, check here tomorrow to see if all goes well.

I’ll be keeping a very different schedule from those original “pathfinders,” but I do plan to arrive in Victoria with my son on Aug. 8 and dip the wheels again into the Pacific.  Fifty-three days from now, we’ll be returning to Vancouver. Hopefully, our journey will be very different from that original road trip.

SOMETHING DIFFERENT …  I checked into my Halifax hotel, the Best Western Plus at Chocolate Lake, and was greeted at the front desk by the hotel’s “Welcome Ambassador,” Cocoa. 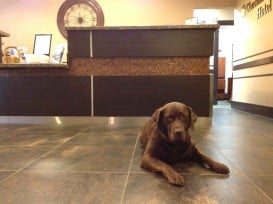 Cocoa lives at the hotel

Cocoa is a five-year-old chocolate Labrador and lives at the hotel. Her bed is behind the reception desk, and she is officially owned by the hotel company. She wanders the lobby and never seems to get excited about anything, but she has her own email address (cocoa@chocolatelakehotel.com) and Twitter account (@thehoteldog), with nearly 2,000 followers – including me, now.

It was assistant manager Tammy White who arranged her adoption as a nine-month-old rescue puppy, taken from a family that apparently didn’t really want her. As a chocolate-coloured dog, she just seemed right for the Chocolate Lake hotel, she says: “We were looking for something a little different and as a business decision, it all made sense. We’re a pet-friendly hotel with a resort type atmosphere – Cocoa was a natural fit.”

Whenever she needs a walk, there’s always somebody available to take her out, and if a suitable member of staff asks, Cocoa will go away for a sleepover at the staffer’s home. But most of the time, she just hangs out in the lobby, doing her job as an ambassador.